I’m a big fan of MSF. I seldom give to big charities because the money is often better spent in smaller ones that are closer to the people they serve BUT if you were to hold a gun to my head and tell me to empty my pockets for a charity I’d be hoping it went to MSF. The main reason is that they are proper hardcore humanitarians and in my experience they are not afraid to speak out.

The MSF photoblog is an interesting place to visit. Great humanitarian photography is rare. You’ll find some surprising and beautiful photographs on the blog scattered amongst artistic approaches that suggest the photographer was so far out of their comfort zone they are reaching for crutches, photographic cliches,  just to come away with something.

I can’t help but feel sometimes that  the wrong people are taking the photos. More of that in a moment.

A couple of things strike me. The picture at the top of the blog is a strange choice. It reinforces stereotypes of the handsome/rugged Western health worker parachuted in to save the lives of poor suffering black Africans.  The reality is this is a daft representation of aid.  Most humanitarian workers, medical or otherwise, working in Africa are black Africans. Black Africans who can understand the languages and cultures of the people they are treating. What they often lack is medical skills.

What message does this send out to the majority of MSF’s workers in Africa, who will be indigenous black Africans?

Tracking back though the blog you will only find one photo of indigenous health workers and another of  a Western health worker.  Its an interesting exercise to compare them.

The photograph of the white health worker is one of my favorites on the blog. It is a powerful and moving image, full of love and warmth and one that a parent can immediately connect with.  The other photo has had the color, and with it the life, drained out of it. One photo I recognize as being a part of the world, another feels apart from the world. 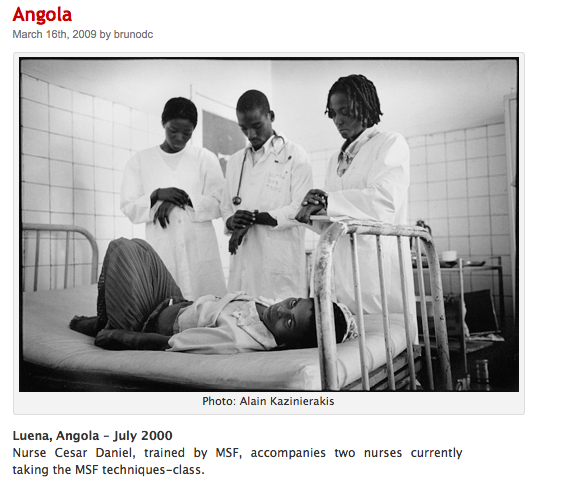 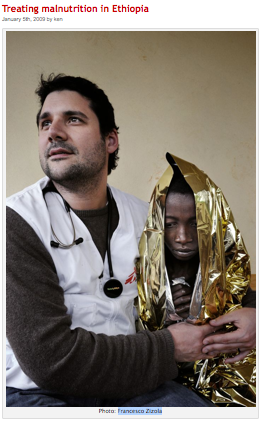 Africa has little need for White health workers from overseas to go and directly treat patients, (not unless  they go in their hundreds of thousands) but it desperately needs them to go and train local health professionals.  That’s the best model for improving medical care in Africa and its the one that most NGO’s like MSF follow. A Western health worker in Africa might save 30 lives in a day, but at the same time he might spend that day training five health professionals who will save 300 lives the next day and so on.

The use of this photo gives off the message ‘look at how great the white MSF volunteer is, saving lives in Africa. Look what a difference we are making’. Nothing wrong with that message because its probably true, but it reinforces a power relationship of dependency.  Real development is dependent on empowerment.

A flick through the names of the photographers featured reveals another subtle yet more shocking truth.

Are you starting to spot the pattern?

I find that a desperately sad truth.  There are some awesome black African photographers, but they’re just not finding their way out of the ghetto.  You see the photography on show is keeping with the model at the top of the blog.  We in the West tell your stories, we heal your wounds, we pick up your pieces, we fix and photograph you. All you need to do is the suffering, we’ll pick up the awards. (this is not the fault of MSF or the photographers mentioned here, the problem is far more complex)

Of course it doesn’t have to be this way. It never does.

In a powerful blog posting on Resolve, acclaimed photographer Reza tells this story:

‘When I came back from  Afghanistan, I thought to myself, the only way to cover the whole thing would be for Afghans to do it themselves. I thought, so let’s train some photographers. I went to refugee camps, explained my idea, and started training people and giving them cameras. This was all on my own. The following years I went to South Africa, under apartheid. Again, I realized how hard it was for foreign correspondents to cover, because the government was blocking entrance to journalists. So I thought the best way would be to train younger people living in the townships. I began training them, and the whole time I was also covering the story from the inside. It gave me a totally different perspective. Because usually when I went somewhere to cover a story, I was finding myself with the same group of photographers in the same hotels. The local people would be better storytellers.’

What they lack is the training, the equipment and the infrastructure to sell their photographs. If that happened, the story would change, it would have to. You’d be getting the insiders version, something far more authentic.

To be voiceless is a terrible thing.  And sometimes those that are supposed to be helping the so called voiceless, keep them disempowered, by taking and twisting their stories as a blunt instrument, ever getting blunter, to be poked at your heart until you’re no longer prepared to give anymore, until you turn away.

That’s when photography’s power dies, because the truth has been so twisted and abused you are left only with a boy alone, screaming in the darkness as he is eaten by the wolves.

duckrabbit does not claim to be an expert, nor have cheap answers. This is a complex subject, but one that demands attention.

Nice article, and you highlight some issues that we do care about. As you said, it’s obviously harder for African photographers to get spotted and get assignments. We’d love to make contact with more local talent, so far, we have been able to connect with some photographers in South America and Asia, but it seems a lot harder to find them in Africa. So yes, the balance in photographers is far from ideal. I hope Tewfic is right and that they will surface more in the coming years.
The image of white medical staff is one we try to balance as much as we can, but this blog is definitely trying not to post too much of the more ‘typical’ ngo photos and trying to focus on visually interesting images, regardless of the presence of medical staff or suffering patients.
best,
bruno

Intelligent and insightful post. Indigenous photojournalists are there…and certainly would be better storytellers than the non-indigenous. it seems to me however, for them to break into the select (and largely self-appointed) circle of well-known international photojournalists is currently pushing water uphill to a large extent. this is slowly changing…budgetary cut-backs forces international newspapers to rely more on indigenous and local photographers, and many get prominence because of their great work (Palestinian photographers in Gaza come to mind). mark my words, the grip on who gets in the “club” will soon weaken and we will see indigenous talent in our media.

Here’s a website that feature and promote works of indigenous photographers:
http://www.majorityworld.com/

I too, believe in empowerment rather than dependency!

If more photographers, like Reza were interested in training people, in empowering them to take the pictures, it would certainly make a big difference. However as he says, what he did was from his own initiative, probably financed by his own money… But there is hope it seems since Majority World exists… some people are aware of the situation and trying to address it. Thanks duckrabbit for bringing this to our attention. everybody should try and care a little more.

Once again you raise many good points and the reading of the MSF images is good, even if it is not surprising that MSF uses those images in that way. However, I am a little sceptical about “local” photographers being an easy and unproblematic solution — which is not to say the status quo is sufficient. You inspired me to think and write some more about this today, so I have put a lengthy post on my site (http://www.david-campbell.org/2009/04/23/aid-images-and-local-photographers/) in response to continue the debate.

I am so glad you mentioned the word “empowerment”. This exact word was in my mind, today, as I watch CNN’s news of a 24 hour day of horror in Iraq with suicide bombings and the image of a 4 year old girl that miraculesly survived it surged. It made me angry and sad. I feel helpless as I watch the news from the comfort of my sofa in the comfort of my house. So I started thinking, how can I help? I am not a rich nor famous person. I cannot empower the good people to fight against the bad people, or can I? If so, how? I too am a big fan of MSF and commend their incredible works. However, it does feel that MSF and other organizations that aid those in need are only treating the symptoms and not the root cause of the problems. What needs to change then? You said it before, EMPOWERMENT. We need to train the people so they can do the job. I am not a health care professional or photographer, but just like me, a lot of people want and are willing to put the dollars where needed to provide empowerment to the people, so they can “save themselves” per say. Terrorists, drug lords, extremists and so on have all these in common: MONEY. They can continue to do what they do because they have the resources to do it. If we can come up with such resources to train the good people so in turn they can help themselves and others, I’m all ears. It appears, perhaps I’m wrong, that the money is there, MSF is a popular organization I think, so shifting gears in the way they do things might provide the solution, just like photographer Reza did. But it cannot be a one-person action. I am surprised the empowerment road has not been considered before, to me it’s the logic way to go.