Toni Morrison’s The Bluest Eye is a story about a young black girl in 1960s America who is sexually abused by her father. It’s beautifully written and painful to read – speaking fearlessly about the realities of poverty, race and gender. It unearths the causes of victimhood and the silence which surrounds and supports the on-going occurrence of sexual violence. How to word something that is kept silent? How to show something that is kept hidden? Morrison writes:

“The novelty, I thought, would be in having this story of female violation revealed from the vantage point of the victims or could-be-victims of rape – the persons no one inquired of (certainly not in 1965); the girls themselves. And since the victim does not have the vocabulary to understand the violence or its context, gullible, vulnerable girlfriends, looking back as the knowing adults they pretended to be in the beginning, would have to do that for her, and would have to fill those silences with their own reflective lives. Thus, the opening provides the stroke that announces something more than a secret shared, but a silence broken, a void filled, an unspeakable thing spoken at last.”

Two things strike me as important here and may prove important in regards to other stories of sexual violence in other mediums:

This makes it clear that to fight against the creation of victims of sexual violence, words and images must be given to those victims with which they can begin to address and describe their suffering and those who cause it. As it will become clear, these words and images are hard to provide or develop in a culture which still struggles to see the complex, various and ubiquitous nature of sexual violence.

In light of this, and to draw our attention to photojournalism, Ariella Azoulay’s essay, “Has Anyone Ever Seen a Photograph of Rape?” sets out an argument for the sheer lack of imagery of sexual violence in the canon of iconic photojournalism (1). Azoulay argues, whilst photographers have brought into the public arena images of many kinds of suffering – genocide, mutilation, violent warfare etc. – images of rape, an act which occurs in much the same context as the other atrocities, are largely absent. This labelling of the blind-spot proves to reveal not only that photographers have mostly failed at documenting rape when it occurs amongst other atrocities (typically during wartime), but their techniques of documenting rape during peacetime are also highly restricted and restricting. This blind-spot, in Azoulay’s analysis, goes on to be seen not just as an historical failure to vision, but also an ongoing inability to envision, born of the inadequacy of social discourses which still cannot recognise the reality of rape.

Azoulay’s questions are then, Why is it we cannot ‘show’ rape in the way that we can show other kinds of torture and bodily suffering? Hint: this might say more about the viewer than the actual event itself. And also – In what ways do these lack of images damage those who might need them – i.e. victims, potential victims and the wider society?

These questions will be explored later. As a first example, ‘Project Unbreakable‘ by Grace Brown is an interesting place to start: 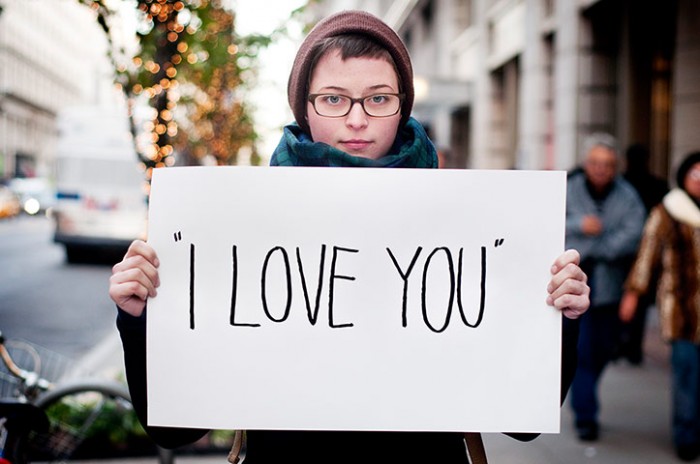 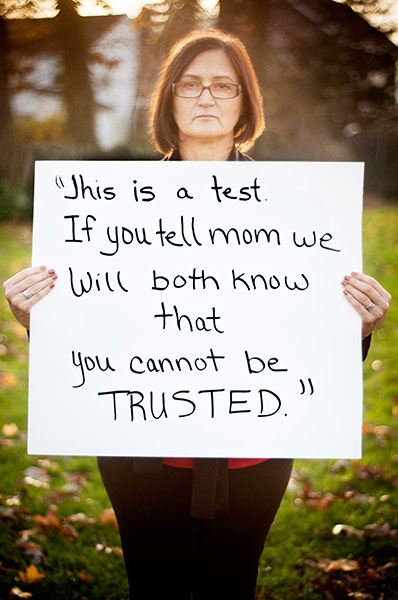 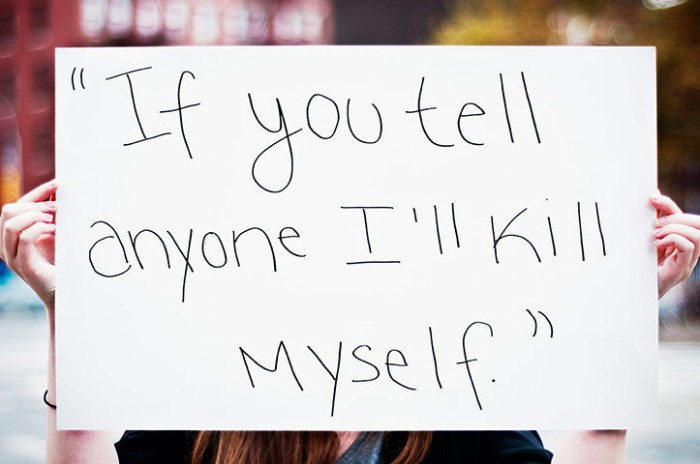 It attempts to do the same thing that Morrison does with her novel, to fill ‘the void’ of silence and bring words and imagery to that which has been kept un-worded and hidden. People who have suffered abuse hold up the words of their abusers, words that were used to silence them. It is one simple gesture of resistance, of refuting the silence that has been put upon them. The phrases are short but they provide a small window into the complex world of abuse and sexual violence. That opening image, ‘I love you’, is especially powerful because it marks the importance of context and the complicated nature of abuse. They signal the way in which abuse can be non-violent – something that must be recognised if these cases are going to reach justice. They also indicate what the victim must struggle with: What if abuse is presented as love? What if you don’t know enough about love to be able to say this abuse is not love? That is certainly the case for Pecola, the abused girl in Morrison’s novel.

Perhaps the technique is a familiar one – photographs of people holding up signs with their personal stories or position on has been used in many other contexts and protests – but here is takes on a special resonance because these are words that have been characterised by the fact that they occur in private. Their power has been because of secrecy, because the abuser persuaded the abusee to never tell, because the abuser invoked shame and fear in the abusee. These signs are an act of placing the shame back on the abuser, of making the public witness what goes on in private. It is one simple way to take the words and turn them around.

The images also make clear, in case there could ever be any doubt, that choosing what to show – the very act of representation – is a fiercely political act. The format and style of that act of showing can make or break the message. These truths are especially raw in the context of a little seen and little understood phenomena which needs vision and recognition in order to overcome its occurrence.

This article is the first in a series about images of Sexual Violence in photography, photojournalism, documentary and visual art. My own piece, ‘You Did This To Yourself‘  figures a response to the issues and examples I raise here.

You can read more about Brown’s project here.

You can see the ongoing tumblr blog of Brown’s project here.