A little over a month ago I wrote a piece about the sponsorship of Sebastião Salgado’s Genesis, an exhibition of photographs of pristine natural wildernesses, by a  Brazillian mining giant. This company, Vale, is according to environmentalists doing a pretty good job of destroying the habitats and displacing the indigenous people that Salgado’s photography eulogises, not least with their involvement in the vast Belo Monte dam project (you can read my original piece here). After writing that piece I tweeted and e-mailed a number of major outlets, to try and get them to run with the story, none of them were interested.

Finally I noticed earlier this week that a mainstream news outlet has picked up on it, The Independent writing a piece reporting the growing uproar over the sponsorship deal, two months after they named Genesis their exhibition of the week. Salgado subsequently spoke to the Independent (something I’ve been trying to get him to do to me for a month without success) to defend the sponsorship deal, arguing that ‘The problem is not the oil companies or mining companies, but the system of life we’ve created’.

Weak as his defence is, there is also something in it. Our way of life belies not just a material reliance on large unpleasant companies, but a profound complacency, an inability or unwillingness to question the origins or order of things. A refusal which makes the activities of these companies, for example stamping on human rights and ravaging the natural world, so much easier for them to get away with. 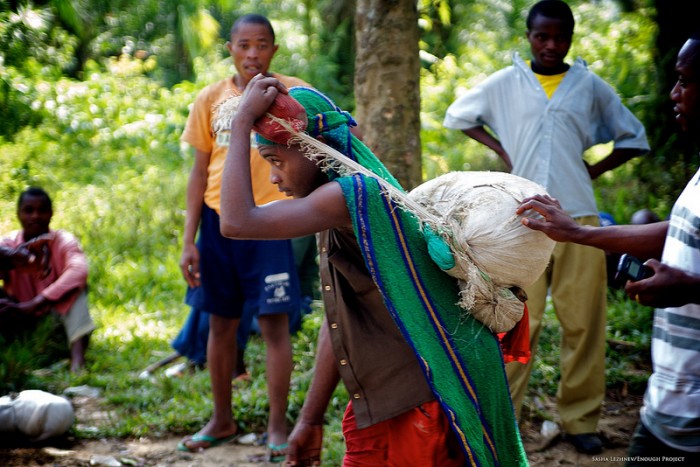 How many thousands of people walked through Genesis, looked at the promotional material, saw Salgado’s name next to Vale’s, and made no attempt to join such obvious dots? How many amongst those were professional reviewers, photography critics? The people who ought to have been questioning the show and its backers but instead were writing snivellingly subordinate reviews, some indeed even praising Vale’s involvement in the exhibition.

We consume much more readily than we question. How many photographers know where the materials for their cameras come from? If you use Nikon or Canon gear the answer is that at least some of the materials will probably come from places where illict mineral mining funds conflict and instability, these two companies are amongst the worst rated companies for transparency and conflict free material sourcing. How many of us care to ask these questions when we go out to buy a camera? At best we wait for someone else to tell us later, that’s certainly what I did.

This is also the reason that I think blockbuster exhibitions like Genesis will always struggle in their campaigning function, because they are first and foremost spectacles to be consumed, and consumption encourages apathy far more  it galvanises a sense of wanting to ask questions or change something. For all the justifiable moral outrage at Salgado’s sponsorship deal, he has a point, the companies just service a way of life that we have created. Forcing these companies to change their practices has to come hand in hand with changes of our own, not just passive lifestyle changes, the rejection of one brand over another, but a more fundamental change towards questioning before consuming.