Faking it: charity communications in the firing line

‘Truth is the first casualty of war’.

So the saying goes.

It’s always been that way.

Leading up to and then during the first world war citizens were fed a series of lies, usually centred around atrocities committed by the ‘enemy’ as governments prepared to unleash hell on the world:

As one British general pointed out after the war: “to make armies go on killing one another it is necessary to invent lies about the enemy”. These atrocity stories were then fed to newspapers who were quite willing to publish them. British newspapers accused German soldiers of a series of crimes including: gouging out the eyes of civilians, cutting off the hands of teenage boys, raping and sexually mutilating women, giving children hand grenades to play with, bayoneting babies and the crucifixion of captured soldiers. Wythe Williams, who worked for the New York Times, investigated some of these stories and reported “that none of the rumours of wanton killings and torture could be verified.”

The outcome of all this lying was that after the war citizens became more savvy, less trusting of overt propaganda. Newspapers were weary of the most extreme propaganda that didn’t come with evidence and  when TV came into popular existence broadcasters signed up to the principle that their reporting should be impartial.  The public developed a false sense of comfort that it was harder for people to lie to us and get away with it.

Along came the internet and with a it a massive proliferation in both the amount of material published and also who could do the publishing. The internet is a propagandists paradise:

Here’s what I mean:

A week ago a friend shared a video by The Syria Campaign on his Facebook page. The video starts with the words:

‘What you are about to see is shocking. This happened this week in Syria’

The film shows a boy being shot, then heroically  getting up and rescuing a girl, whilst still being shot at. You can see it here.

The Syria Campaign’s version of this film has been shared several hundred times and has over 10000 views. The original version of the film, which was not made by The Syria Campaign, was first posted to  Youtube and  had over 4.1 million views. The film  has been shared widely by newspaper websites (Daily Mail, Telegraph, Independent) who in the first instance showed no interest in verifying whether the video was real. The Telegraph embedded the film and included this commentary

The Telegraph cannot independently verify the footage but it is thought the incident took place in Yabroud – a town near the Lebanese border which was the last stronghold of the moderate Free Syrian Army. Experts tell the paper they have no reason to doubt its authenticity.

At the end of the film The Syria Campaign asked us to share the story and sign a petition. This was my response to them on November 11th

Apart from the too clear sound, the obvious special effects and the movie staging, you don’t fall forwards like you’re in a Hollywood movie when shot, then get up unbloodied and keep walking. Despite this three days later the BBC was reporting that the film might well be legitimate.

In an interview Amira Galal from BBC monitoring Middle East  said “we can definitely say it is Syria and we can definitely say that it’s probably on the regime frontlines, was almost certainly shot on the front lines in Syria…I think it would be very difficult to give a definitive opinion about whether it’s fake or not.”

Ten hours later the BBC put out another story stating that the film was indeed a fake, made by Lars Klevberg, a 34 year-old film director based in Oslo. He says he deliberately presented the film as reality in order to generate a discussion about children in conflict zones:

“We shot it in Malta in May this year on a set that was used for other famous movies like Troy and Gladiator,” Klevberg said. “The little boy and girl are professional actors from Malta. The voices in the background are Syrian refugees living in Malta … By publishing a clip that could appear to be authentic we hoped to take advantage of a tool that’s often used in war; make a video that claims to be real. We wanted to see if the film would get attention and spur debate, first and foremost about children and war. We also wanted to see how the media would respond to such a video.”

Pretty soon afterwards the story that the film is fake became the most shared article on the BBC website. In a further twist the Youtube channel (Shaam News Network) on which the video went viral has been suspended.

What interests me most is when and how some NGO campaigns reached the point where they are willing to trick people  in order to get them to sign a petition/get behind a cause?

What is the validity of a petition signed by people under false pretences?

Surely The Syria Campaign not only loses any moral authority it might have gained through its important work but also torpedoes their own objectives by seeking signatures this way?

The Syria Campaign gave me this response before the video was outed as fake:

‘As far as we’re concerned, the video depicts experiences that are real. Though the video hasn’t yet been verified, we know incidents like this occur every day.’

In other words kids are getting shot in Syria so what difference does it make if this is fake but it makes you think about all the awful things that are going on over there?

The Syria Campaign continues to share the video, despite protests such as this.

This strategy of bending the truth to fit your cause is well trod. Afterall it’s what we often do when we debate a subject.  I would go as far as to say not only is it acceptable, to a greater or lesser extent, but it’s expected.

Here are a few extreme examples:

Several years ago a well respected advocacy organisation put out a video of a woman (shot in shadow) calling for the Syrian soldiers to put down their weapons. The video appeared embedded on a UK newspapers website, with the accompanying text that the film was the direct plea of a Syrian mother and was shot inside Syria.

Infact the video was shot in London; a second woman’s voice with a more authentic accent was dubbed over the original woman’s voice and the script was not written by a Syrian mother but an American living in Beirut.  Pure propaganda. At roughly the same time this video was released the founder of the advocacy group gave a high profile interview in which he stated  they were playing a ‘verification’ role for citizen media coming out of Syria.

Recently Oxfam ran an online ebola campaign on Facebook using a picture of an MSF medical worker, taken in one of their clinics,  helping a child: 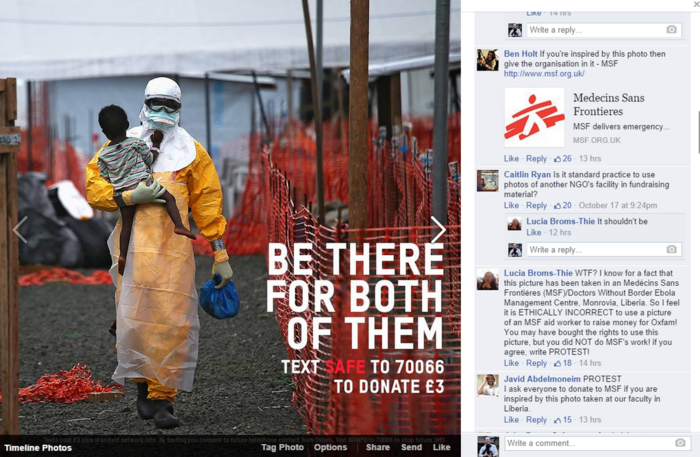 The backlash in the comments was swift and severe.

Oxfam realised their mistake, put out a sincere statement apologising and eventually took down the offending post.

I appreciated Oxfam’s response and it made me have more respect for them. It wasn’t the first time something similar has happened though. A few years back Save The Children ran a print advert calling for donations that featured a picture of a half dead child being cared for in a an MSF hospital in Dadaab, Kenya. Had they published the picture in the same way on their Facebook page I suspect they would have faced a similar backlash.

(Please note duckrabbit have worked for and trained the staff of both Oxfam and MSF. I’ve witnessed  the terrific work they both do on the ground. A donation to either of them is well spent)

Another large charity recently ran a fundraising campaign which showed a successful generic African woman whose family they claimed they had helped climb out of poverty. It was a conceptually interesting TV advert but it wasn’t a winner as a fundraiser. So when the same woman appeared in online advertising we were asked to give money to help bring her and her family out of poverty. The same ethnic woman was presented to audiences in diametrically opposite ways to try and have the same impact, raise more money.

Maybe we should be forgiving of charities, PR and advertising agencies, advocacy organisations and journalists who fake (or twist) stories to get our attention. Do audiences really care? Doesn’t the end justify the means? This is certainly how some people responded to the suggestion that it was wrong to fake the Syrian boy hero. Maybe they are right. If the Oxfam post raised much needed cash for the fight against ebola isn’t that a good thing?

But I think it’s also true you are less likely to change your point of view if you feel the person trying to persuade you is in some way deceiving you.  There’s a failure in communication if we are talking about whether a video is fake as opposed to the suffering of the people in Syria or the 1800 kids that are not actors who have been shot dead during the war.

And one question leads to another. If you are really helping people; if your cause is just; if you want an honest relationship with me, why do you feel the need to make stuff up?

One possible reason that NGO’s pump out so much overt marketing propaganda is because there is more of a budget for spin then authentic storytelling.

In NGOS often the marketing and fundraising departments have more money and power than the communications teams.  They are judged on short term goals that largely revolve around growth of revenue and brand reach. The pressure is immense. People’s jobs are dependent on them bringing the cash in. Very few of these people will have ever lived or worked in the places the charities are set up to benefit.  This is even more true in the agencies that they contract who belong to the Band Aid school of advertising:

Make shit up (There is no peace and joy in west Africa this Christmas). Put a famous face (or 30) to it , and screw the unintended consequences (we maintain a colonial relationship with black people who live in poverty).

The better communications departments  in charities are themselves masters in spin because newspapers and broadcasters are so susceptible to it. If you want to get the media’s attention just make up a figure about how many kids might be catching ebola a week by Christmas. The higher the number the better, even if it’s based on tenuous research.

I don’t blame them.  It’s a game and if you pay me I too will play it to win. But not by faking it.  And not because it can’t be justified, but because I’m not cynical. The charities we work with have a very positive impact on the lives of the people they serve. The sector as a whole just needs to invest in better ways to tell those stories of change.