There’s a moment on the third morning of Rogue Film School where the great film-maker Werner Herzog asks a shy,  super talented young man about his use of visual effects.

“We filmed them naked against a green screen and then I used CGI”  Chris Boyd explains.

Here is the enigma of Herzog. Utterly vibrant, utterly alive to the possibilities of this world yet so single-minded, so seemingly attached to the moment, that at times he can appear oblivious to the bleeding obvious. He has made over 45 feature documentaries and films and at 73 is more productive than ever but “what is CGI”?

Herzog’s Rogue Film School runs over one evening and three days. Out of the couple of hundred applicants that apply Herzog personally whittles the group down to the fifty or so he thinks will get something out of the experience. I was one of the lucky ones to get a golden ticket. And so to Munich we ride.

I am no Herzog fan-boy  but I admire his work and have found myself nodding furiously when I’ve heard him speak.  I’m here because I’ve  lost touch with myself and I can’t see the value in what I do any more. I’m here to be challenged. To have one of those moments where you feel, utterly, deliciously alive. To kick-start the sense that all this pissing around with cameras is somehow worth it.

Herzog has a simple message. The system is against you. Do not complain. Do the doable. Read. Read. Read.

He delivers it eloquently and with grace. All energy and kindness, openness and bullshit free. In person there is nothing pretentious or insincere about Herzog.

Some of the fanboys are disappointed (the girls not so starry eyed) . Herzog is telling the same stories you can find on youtube for free. Somehow they expected you could pay a £1000 to have Herzog tell you truths he has held back only for those with silver in their palms. But he’s a poet, not a prostitute. He is all in, all of the time. This is the man who ate his shoe as “an encouragement for all of you who want to make films.” Take the moment for what it is and you will be blessed by the experience.

Scenes come and go on the screen. Followed by stories and all too random questions. Each hour flows into the next. The format is loose and easily derailed as pertinent stories are sometimes followed by impertinent questions. A Frenchman sits at the back of the class wearing a dead fox and pours himself a glass of white wine.

One fanboy who is disappointed steps to the front of the class to claim that every question so far has been without merit and then quotes from Conrad. He wants to know what is it about Herzog that keeps him (metaphorically speaking) pushing down the Congo? Maybe he was hoping for a communal trip. Herzog calls him out for being cowardly and reading the question from his phone. Phones are banned. His sin is cardinal. The young rogue skulks back to his seat where he quietly simmers for the next hour or so. When he finally pops he calls Herzog an egomaniac and fizzles from the room. Of course he’s a fucking egomaniac I want to shout after him. He’s Werner Herzog. Herzog continues as if nothing has happened and a Frenchman sat at the back of the class pours himself another glass of white wine.

In the afternoon of the second day we are given a treat. The musician, and long term Herzog collaborator, Ernst Reijseger undresses his cello and brings the poetry hinted at but not there in the films we watch. Reijseger’s score in progress is played along to footage from a documentary Herzog is working on about volcanoes. The music is rough, computer generated and cannot inspire (yet), but the interplay between the two is fascinating. The push pull of two men in awe at what the other can do but also wanting something tangible from the other. We witness an eloquent, respectful dance. Herzog invites Reijseger to play us out to the break and he becomes one with his instrument. Images have nothing to add, have nothing to speak to that sound which swallows the room for a beautiful moment and then is gone.  How lucky we are to be alive. Applause and we shuffle out except for the Frenchman who sits at the back and pours himself another glass of white wine.

Herzog speaks of loneliness. Not some existential I am a poet, the disconnectedness of the universe is overwhelming and I willl drink myself into oblivion whilst typing furiously and barking angrily at no-one who will listen kind of loneliness. Herzog calls out this kind of artistic bullshit. No the deep down practical loneliness of being the last man alive who thinks he can actually pull a 300 tonne ship over a hill and finish a film. There. That is the determination. That is the force of nature. And there. That is the cost. But the moment is gone when a rogue raises his hand to ask about finance and a cork pops as the Frenchman opens another bottle of wine.

Another rogue wants to know how Herzog gets such great interviews? ‘This is not something I can teach you’ he says and then shows an interview with Elon Musk which by any measure is excruciatingly bad (but serves the purpose of bringing Musk down from the sky). The question comes again later in the workshop and again Herzog states this is not something he can teach. He is right of course this is not something you can teach but neither is it a mystery, When Herzog sits down with a stranger he has utter belief that in that moment they will give more of themselves then they could possibly imagine, then they could ever prepare for. It is the power of ‘I believe in you’. It is the power of ‘your story matters and no-one will tell it better than me’.

That’s something I understand from 20 years of interviewing people:

Rushing on, powered by wind, Herzog has no time for the idea of Cinéma vérité as a vehicle of truth. It is ‘bullshit’ that you can aim a camera at something for 500 hours and craft ‘truth’. I’m with him. He’s taken this boxed thinking and given it the grave it deserves. He then unboxes his own version. The road to ‘ecstatic truth’ as he puts it. To demonstrate he shows us a clip from his documentary Bells from the Deep which explores Russian Mysticism. In the film you see a couple of pilgrims crawling across a frozen lake in a mystical quest to uncover a lost city whilst a woman tells the story of a mad pig that bit her hand:

“I wanted to get shots of pilgrims crawling around on the ice trying to catch a glimpse of the lost city, but as there were no pilgrims around I hired two drunks from the next town and put them on the ice. One of them has his face right on the ice and looks like he is in very deep meditation. The accountant’s truth: he was completely drunk and fell asleep, and we had to wake him at the end of the take.”

It is pure theatre of the absurd but to Herzog the scene reveals ‘the soul of Russia more than anything else.’ Does it really? For me it reveals more about Herzog then it ever could about the soul of Russia. He is at his best as a film-maker when the cartoon some expect him to be remains undrawn.

At the end of the workshop participants sit one by one across a table from Herzog, have a moment to declare their undying love and are presented with a certificate of participation and a signed copy of his book Conquest Of The Useless. I’m not arsed about the certificate but the book I tell him I will treasure. I also tell him he’s wrong about not being a teacher (something he repeatedly claims). His energy and enthusiasm, openness and eagerness to engage, along with his highly tuned bullshit detector and sense of wonder make him the perfect teacher for those who want to hear. He tells me that at the end of the three days he has nothing left to give. I believe him and I am in genuine awe of his energy.

I hate goodbyes and before the group photo I slip away past a Frenchman (who turns out be a wonderful film-maker) sipping on a glass of warm wine and spit myself out into Munich’s rush hour.

I came away from Rogue Film School unconvinced of the power of cinema to reach the ‘ecstatic truth’. I am not a convert. For me Herzog’s best work cannot reveal the true soul of a human any more than Cinéma vérité can reveal the truth but really I couldn’t care less because what it does point to is the genius that is Herzog.

After three days of that I feel utterly alive and blessed. 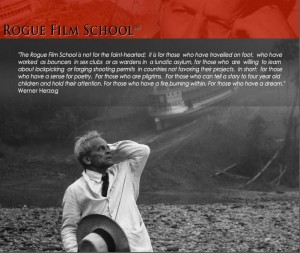 (I would like to thank the people behind the workshop, in particular Jenn Murphy and also say to anyone do not hesitate to apply if Werner runs another film school. Also thank you Peter for encouraging me to go)