Love & Loss on a Northern Isle

It started in the wee hours, a distant keening that came and went as the wind gusting in off the Atlantic hustled around our van. It was in the notquitedark, an hour or so beyond midnight, on Orkney Mainland in midsummer and the sound draped itself across our campsite, a veil of melancholy, yet eerily beautiful. I lay captivated by the call and response, as grey seals ‘sang’ to each other in the waters off Birsay.

My reverie was short-lived. “Get in yer bed ya stupid fucker, how many times do we need to tell you, in…your…fuckin…bed…!” echoed across the campsite, said angrily in a broad Newcastle accent. Then, the sound of a scuffle and a crash, the clatter of beer cans, bottles and some other unknown objects colliding, tent zip opening zzzzzzipppppppp and a light flashing. I looked out and saw a drunken figure, the same guy who’d been drinking all afternoon, staggering off towards the toilet, mumbling profanities to himself. He was one of a group of contractors working on the construction of Kirkwall’s new hospital and camping here for the duration of the job. I’d spoken to several of his mates that day, nice lads working hard far from home and frustrated by their permanently fractious and now utterly sozzled companion. Next morning all was quiet. I walked across to the toilet and passed an elderly man who was tending some flowers in a box at the entrance to the communal kitchen and hostel area, where I noticed that a new defibrillator had been installed on the wall since our visit the previous year. “That looks like a labour of love” I remarked, and he looked up, momentarily distracted from some distant place, and smiled and said simply “Yes”. He seemed vaguely familiar but I assumed I’d seen him on a previous visit. To my suprise I spotted a trashed TV set in the bin in the toilet, an obvious casualty of the night before.

We spent the day visiting Maeshowe, the world famous neolithic tomb, crawling through the entrance tunnel into the gloom, to marvel at the Viking graffiti carved into the wall, some of it apparently gouged with an axe, so the guide informed us. The Vikings marching from Stromness to Kirkwall had been overhwhelmed by snow and sought refuge in the only shelter they could find – Maeshowe. Once inside, dropping through the roof, they’d marked their presence with runes and carvings on the stone walls to while away the hours, that became days as the storm continued unabated outside. 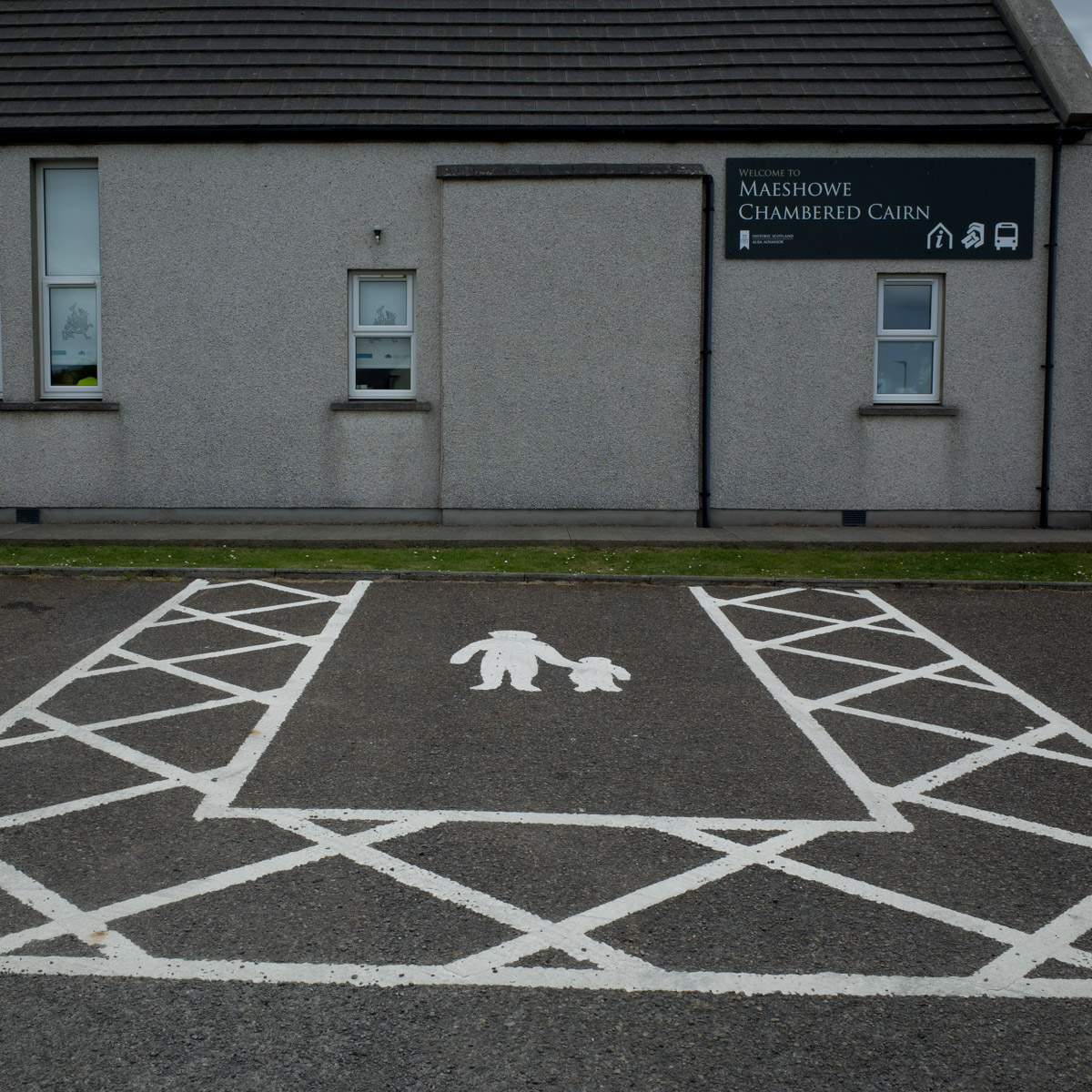 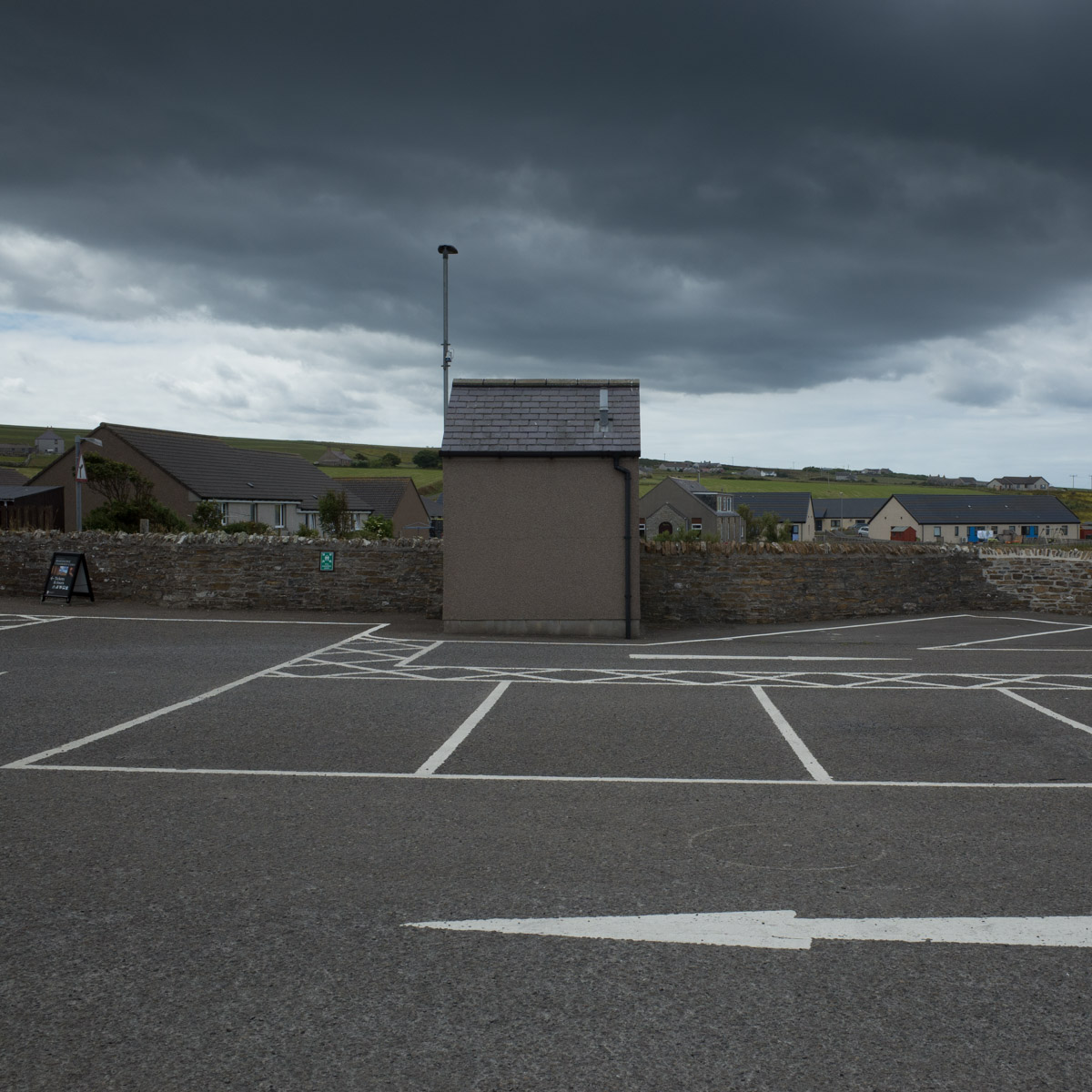 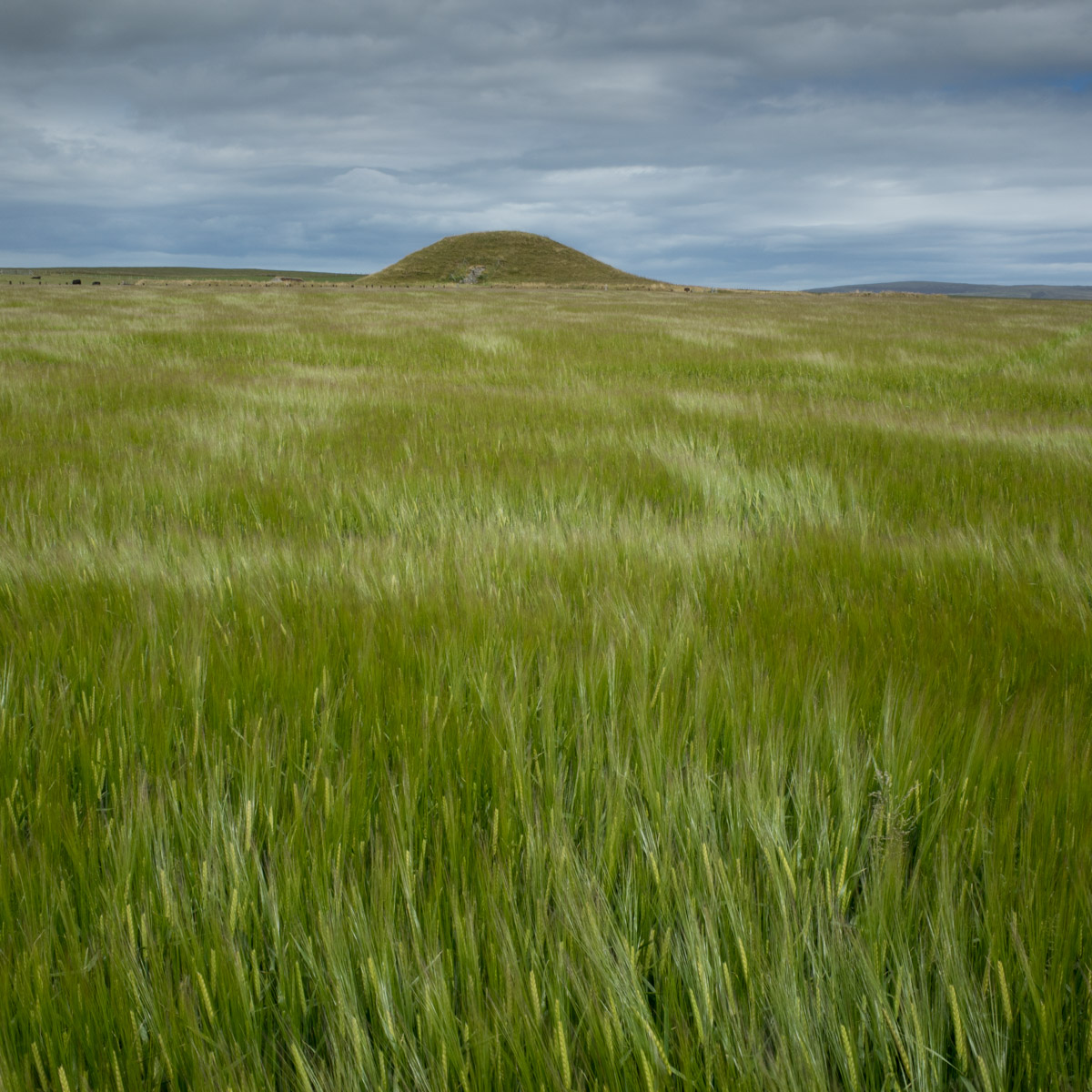 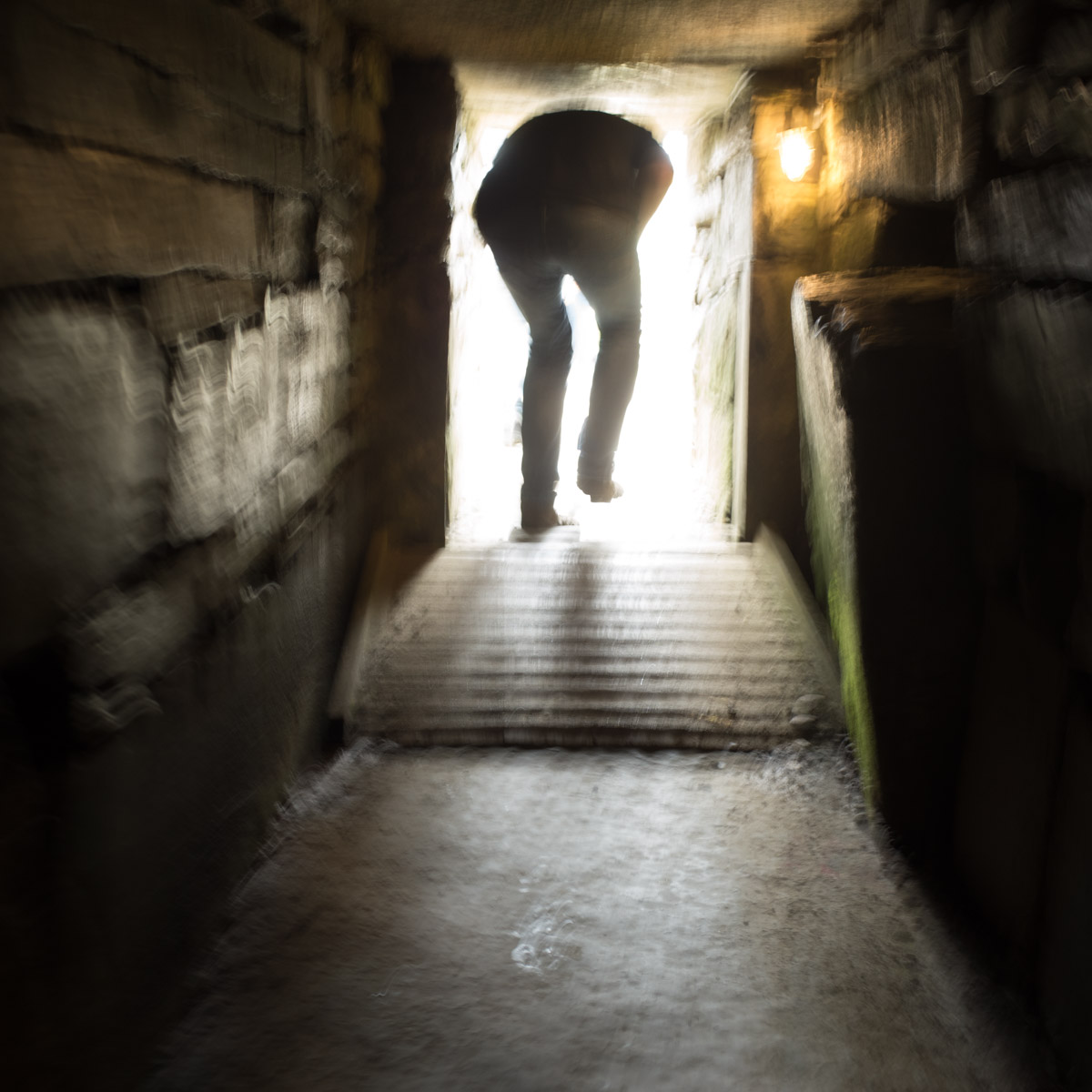 Later we walked along the coast looking for whales but saw only waves, lots of waves, and standing stones, almost as many stones as waves it seemed. Orkney is like that, layer upon layer of history washing over you, from the Neolithic, to the Viking, the Victorian to the fortifications built during WW2, all built upon the fertile soil of these northern isles. My son William is fascinated by WW2 and has been since he was only 5, and now at 10 years old was keen to see as many wartime sites as possible, so The Churchill Barriers and the blockships were on the agenda too. But Vikings – he likes them too and anything remotely axe or sword-related was sure to be a hit.

Back at our campsite in the late afternoon we sat in the warm sun and contemplated our choices of supper. Suddenly WHUMP WHUMP WHUMP WHUMP WHUMP reverberated across the site as the Coastguard helicopter rose above the nearby hill, a sound very familiar to us as we live near the Inverness Coastguard base and one flies over the house regularly. It circled slowly, worked its way along a ridgeline then dropped back towards the loch behind and hovered, moved, hovered, moved. It was the unmistakeable pattern of a search. The small group of people at the next pitch to ours looked across, one of them was the man who was tending the flowers earlier. One fellow walked over…. “Its searching for a missing local chap, James Mainland. He’s from the cottage over there, has dementia, thinks its still WW2 and he has to fight the Germans, he’s 88 years old and knows the place well and he could be anywhere. He walked off this morning at 7am or so and hasn’t been seen since.” 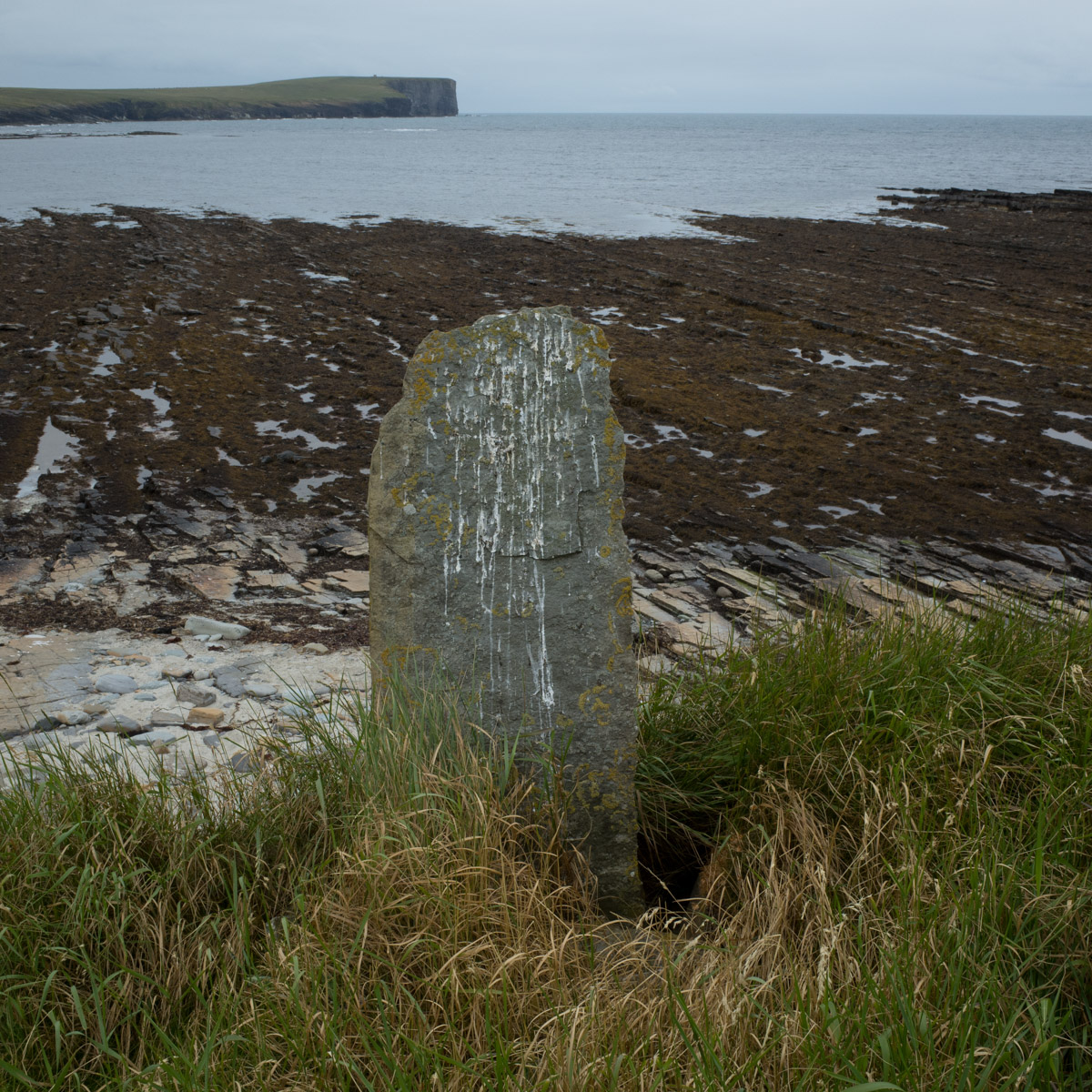 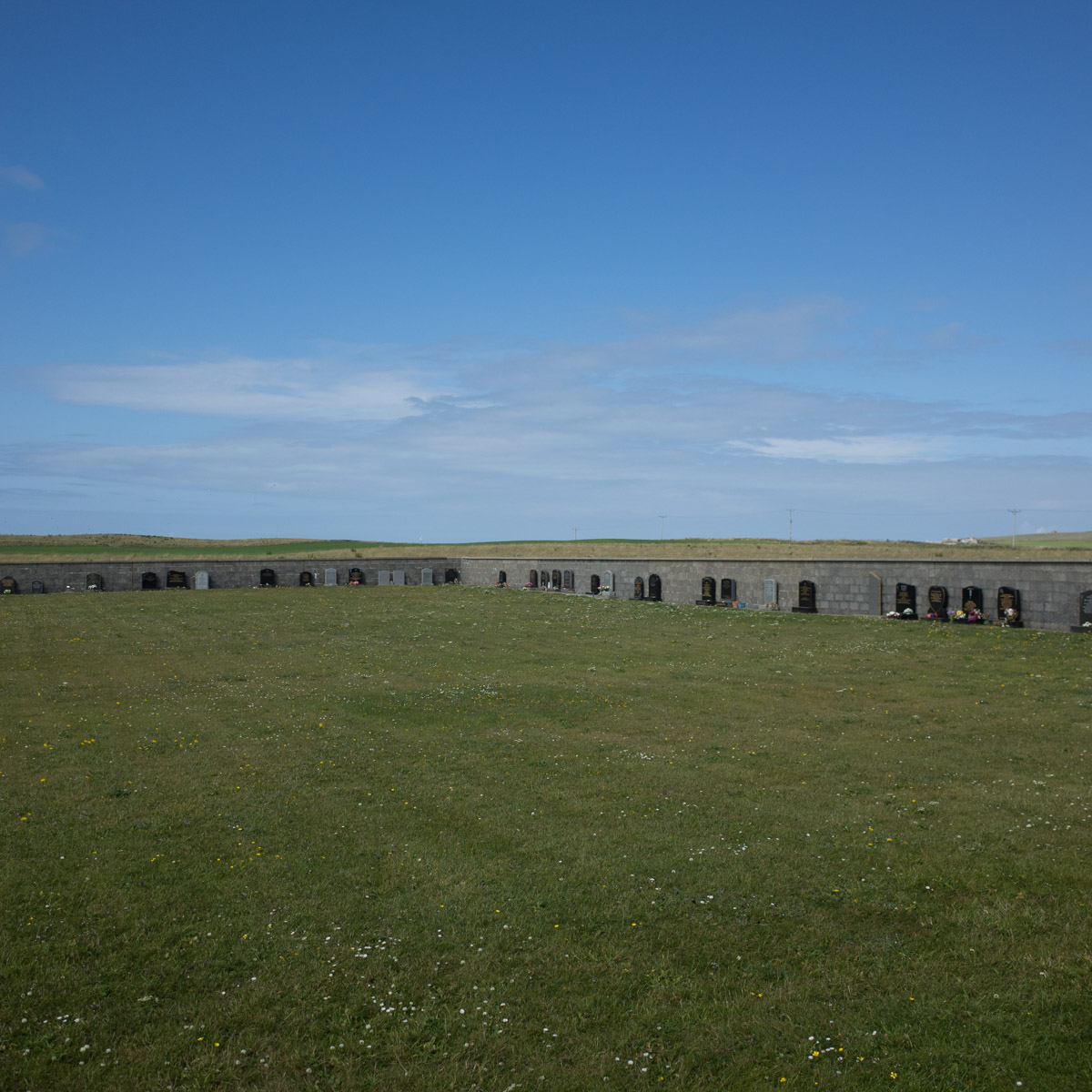 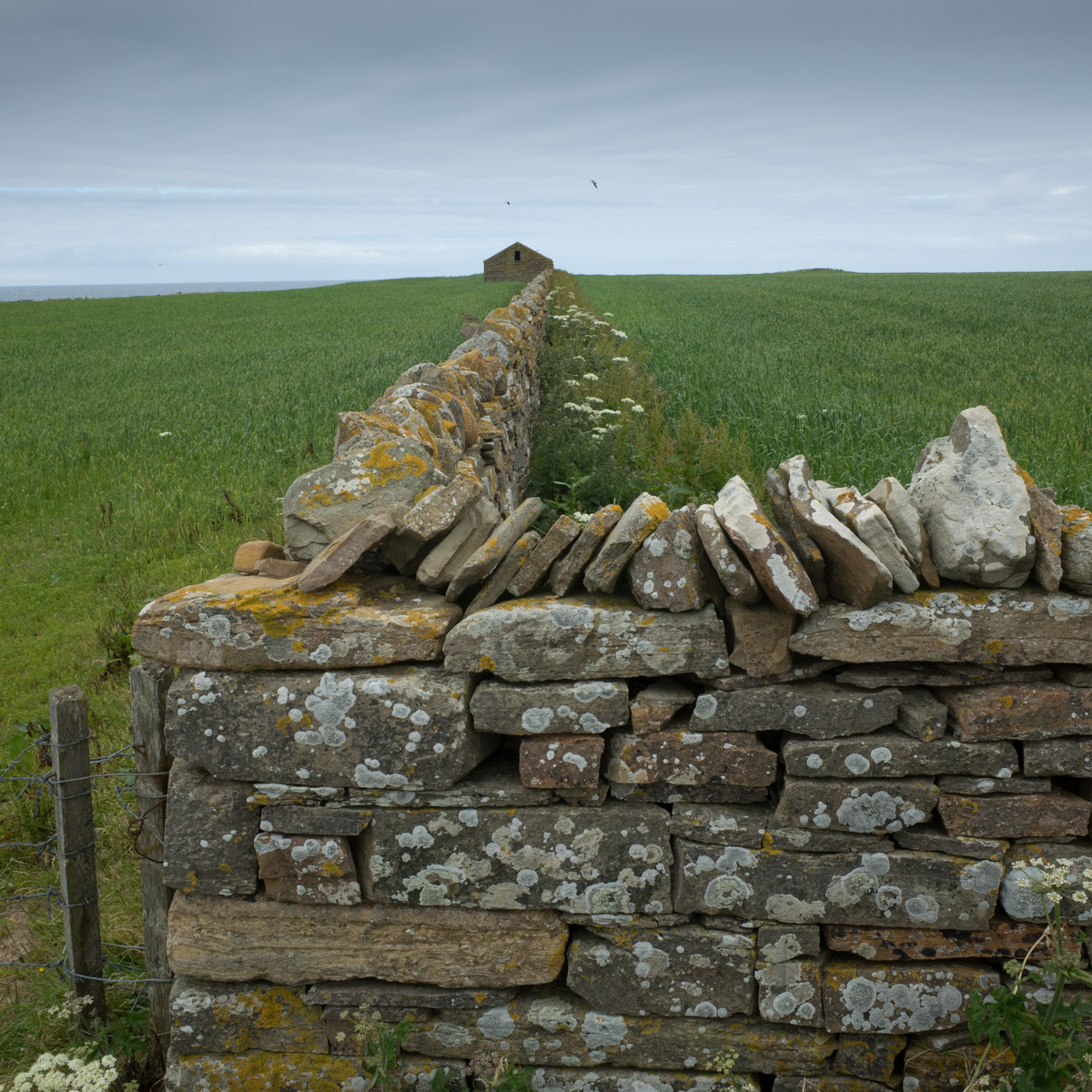 We introduced ourselves, he was Ian, and he was curious about my accent, so I told him I was from Fort William. He smiled “Charles there is from Fort William too, he’s a Hepburn, still got family down there, do you know him?”  I remarked that he’d seemed familiar when I’d spotted him tending the flowers this morning, and Ian smiled. “Ah the flowers…they’re for his wife, do you know what happened? The defibrillator?”  I shook my head.

Ian told me the story. “Charles and Kathleen came up here every year, he to fish the wee lochs for trout and blether to folks he knew and Kathleen was able to visit family and friends, as she’s a native Orcadian. But last August Kathleen collapsed, Charles found her slumped in the kitchen doorway, unresponsive. As a skilled Mountain Rescuer and career Policeman Charles knows enough First Aid to save a life and did what he could. An ambulance was called but it took over an hour before it arrived. There was no defibrillator available locally either, but as it turned out Kathleen had suffered a massive brain haemorrhage and was beyond assistance. Come on over and I’ll introduce you, you’ll probably have some friends in common from Fort William…” and he called Charles over.

As is the Highlnd way it took only a few minutes to unearth our respective histories, he knew my Uncle and cousins, I knew his cousins and brother, we’d all gone to the same school and knew several of the older Mountain Rescue stalwarts from the Lochaber team he’d volunteered with when he was younger.

I said I was sorry to hear about his wife, and asked about the defibrillator. “Ach, I wanted to do something, to mark Kathleen’s passing, something useful. We loved it here, we’d come up every year, and…” his voice tailed off into sadness. We stood and listened, watched the helicopter circle overhead. “…well anyway, I got a plaque made, to put on the wall beside the defib unit, but its not arrived in time, I was hoping it would be here so I could put it on the wall. I’d mentioned locally I wanted to get a unit to put on the building and the response was amazing. A local farmer donated £300, a businessman another few hundred £££, both people I’d never met, the community have been so wonderfully supportive and so we’ve got the unit here and it might save a life someday…” his eyes filling with tears as he spoke.

“I know what it means…” I replied quietly “…my partner collapsed in town one day, her heart just stopped. She was saved by people standing nearby who knew CPR. She was very lucky to survive…she has some issues from the brain damage she suffered but she’s alive. She was involved in getting a defibrillator installed recently in our wee village too, and CPR training for her colleagues at work.” Charles smiled. We shared a moment as my eyes started to tear up as well. 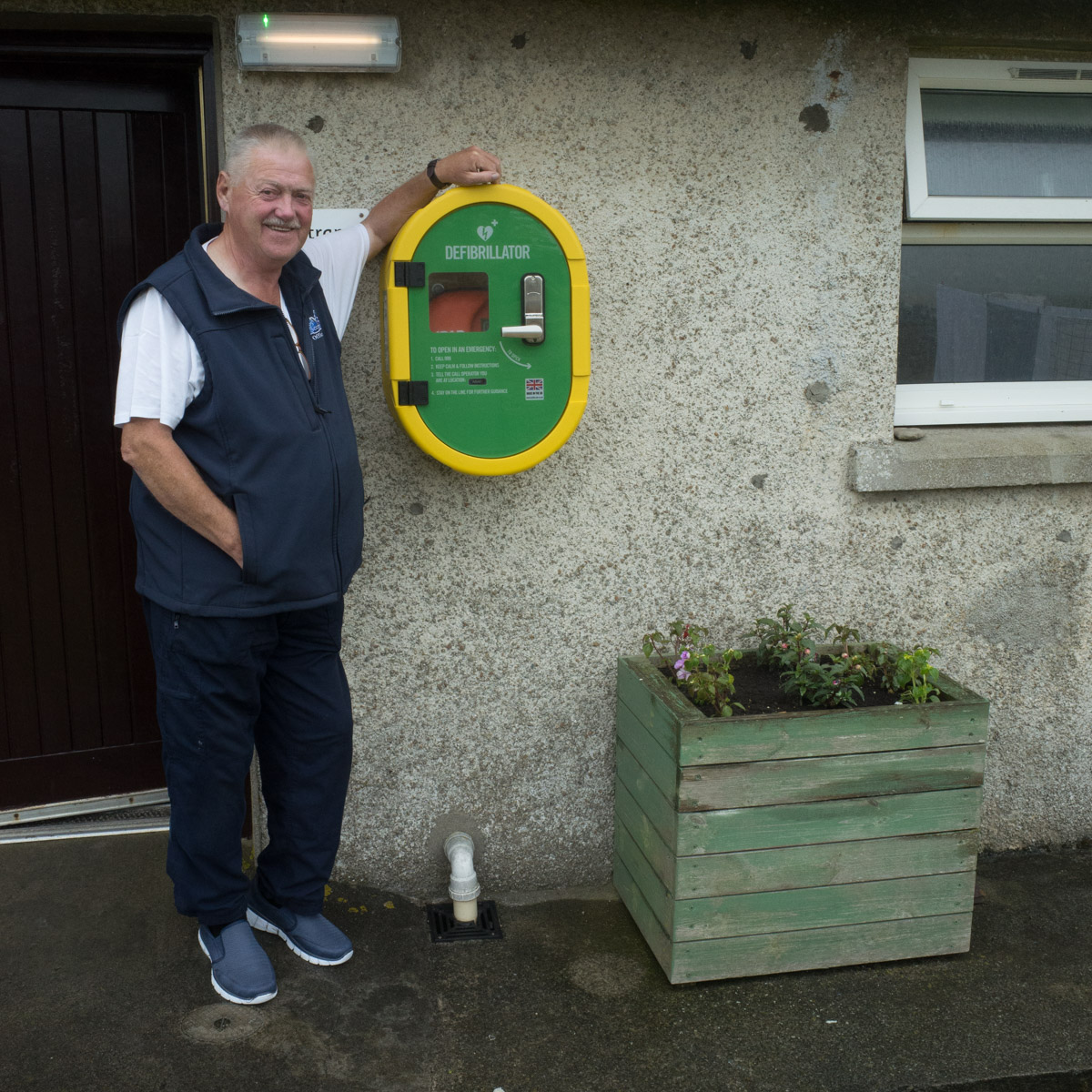 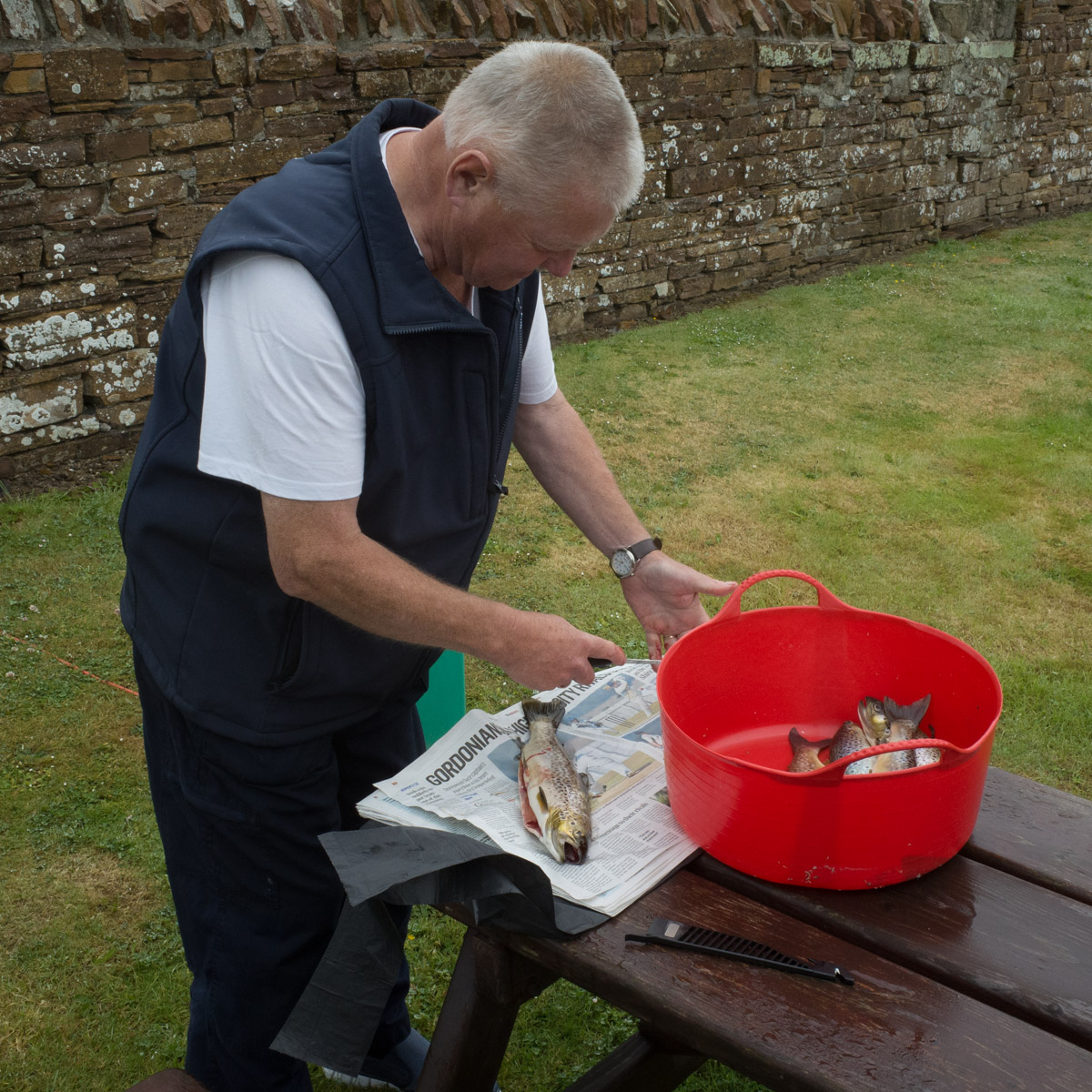 Next day, Sunday, we stayed close to camp. Melanie took William inside to play Monopoly and I took the dog for a walk. I came back to turmoil. The Police who were coordinating the search for the missing man were striding through the campsite from their temporary base in the Community Centre next door, and heading for the drunk contractor who was staggering about in his shorts. I found out later what had happened….he’d been inside the Lounge area where Melanie was playing games and several other campers were sitting reading, and his behaviour became completely unacceptable and Melanie, who is fairly petite but possessed of a temper that can shatter glass, lost it with him and sent him and his pals running for cover. But another of the campers simply walked out and over to the Community Centre and asked the Police to come and sort it out. Contractor was given a stern lecture, calls were made and he was advised that leaving the island on the next available ferry was his only option. 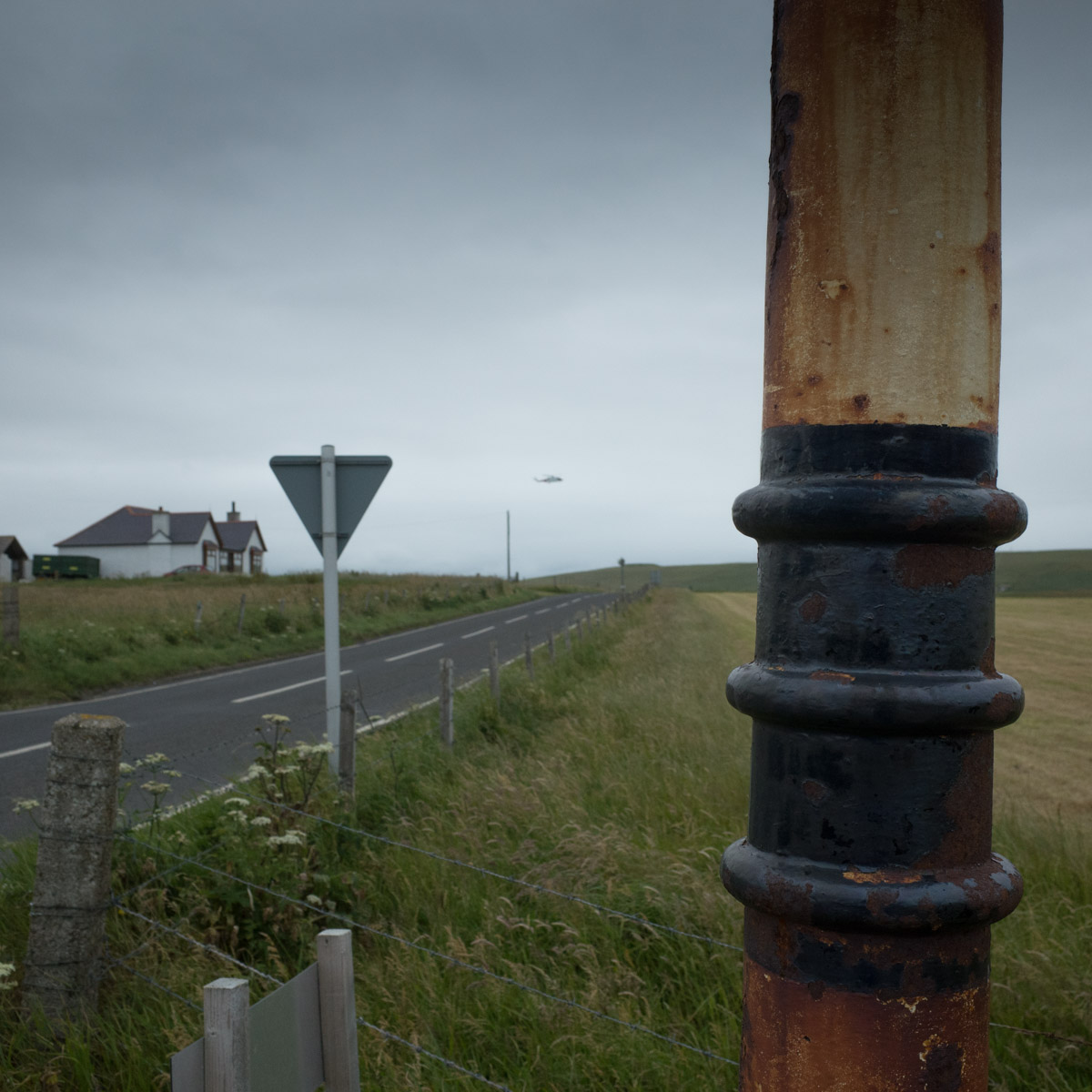 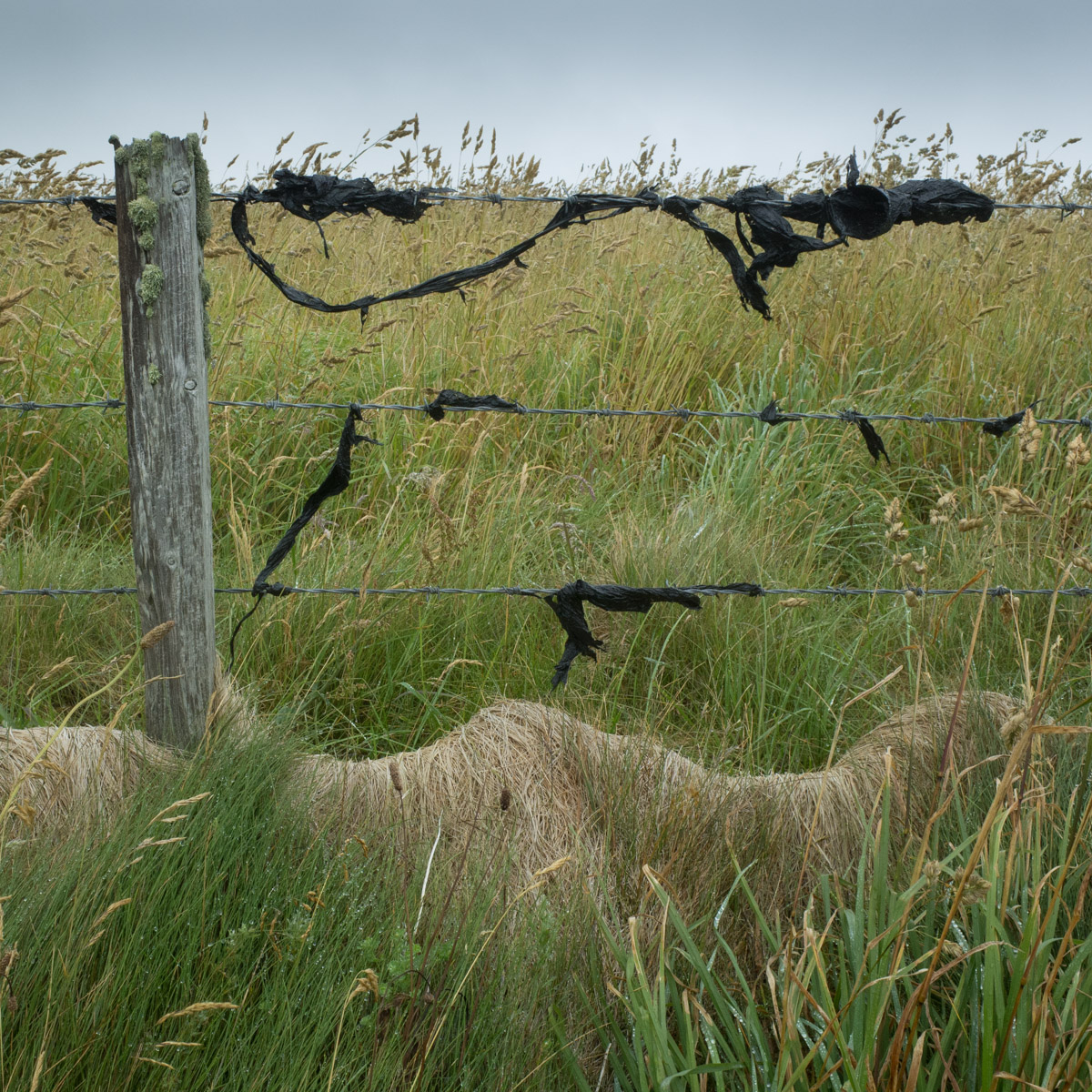 Next day the helicopter continued its search. Whump whump whump……I watched the birds with my binoculars, the daily starling patrol, the oystercatcher peep peeping on the fence post and occasionally glassed the sea with my telescope hoping to see a whale or dolphin, all common around this coast, but the rough chop concealed their presence. I knew fine well they were there, somewhere, but with all the heaving of the sea their passage was a secret kept between them and the waves. Several times I turned and scanned the bare hillside, and the rough field margins in particular, following fence lines hoping some grey smudge would resolve into a human figure, crouching as if ready to fight off the Germans, but I could see nothing of the sort. Simply grass waving in the breeeze, and a mass of wild flowers.

Our short break drew to a close, and it was time to depart. I loaded up our stuff, and reflected on the events of the past few days. The 2am mournful chorus of grey seals, witnessing viking runes carved with axes on a tomb’s walls preserving the passage of a group of people hundreds of years ago. A plaque soon to be erected on the wall behind me to commemorate the passing of a daughter of the island, who might otherwise have come and gone unnoticed save for her family who will miss her presence, but who will now be remembered by all who visit this glorious spot.  A careless young Newcastle man whose drunken antics may have cost him his job, and an elderly man now 4 days absent in chilling wind and drizzle gone off to conceal himself from the Germans and still to be found. The trajectories of several lives all coming together in this one small corner of an island, in only a few days.

Islands are special places, you can’t easily leave them, the presence of water all around has a lot to do with that of course, but even when you do depart you leave something behind, but the best bit, the really special part, is what you take away with you. If you don’t understand, just visit, then you’ll know… 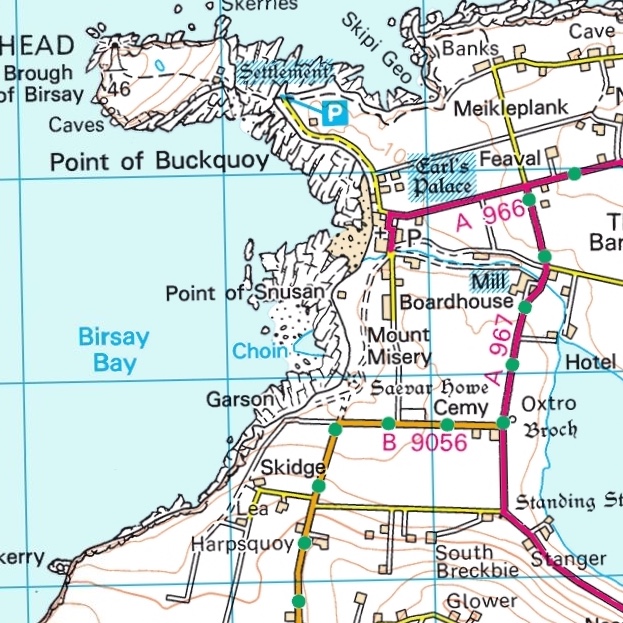 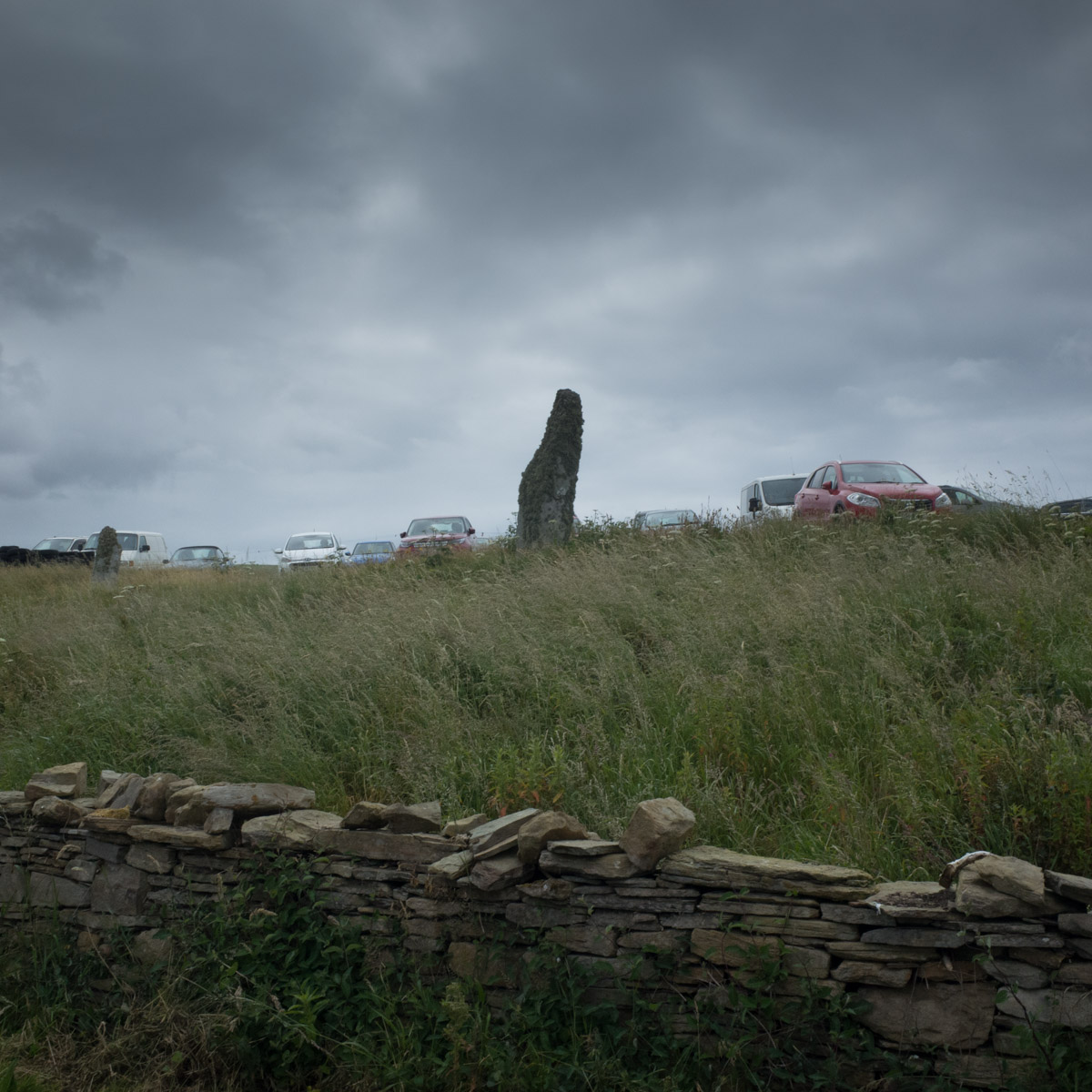 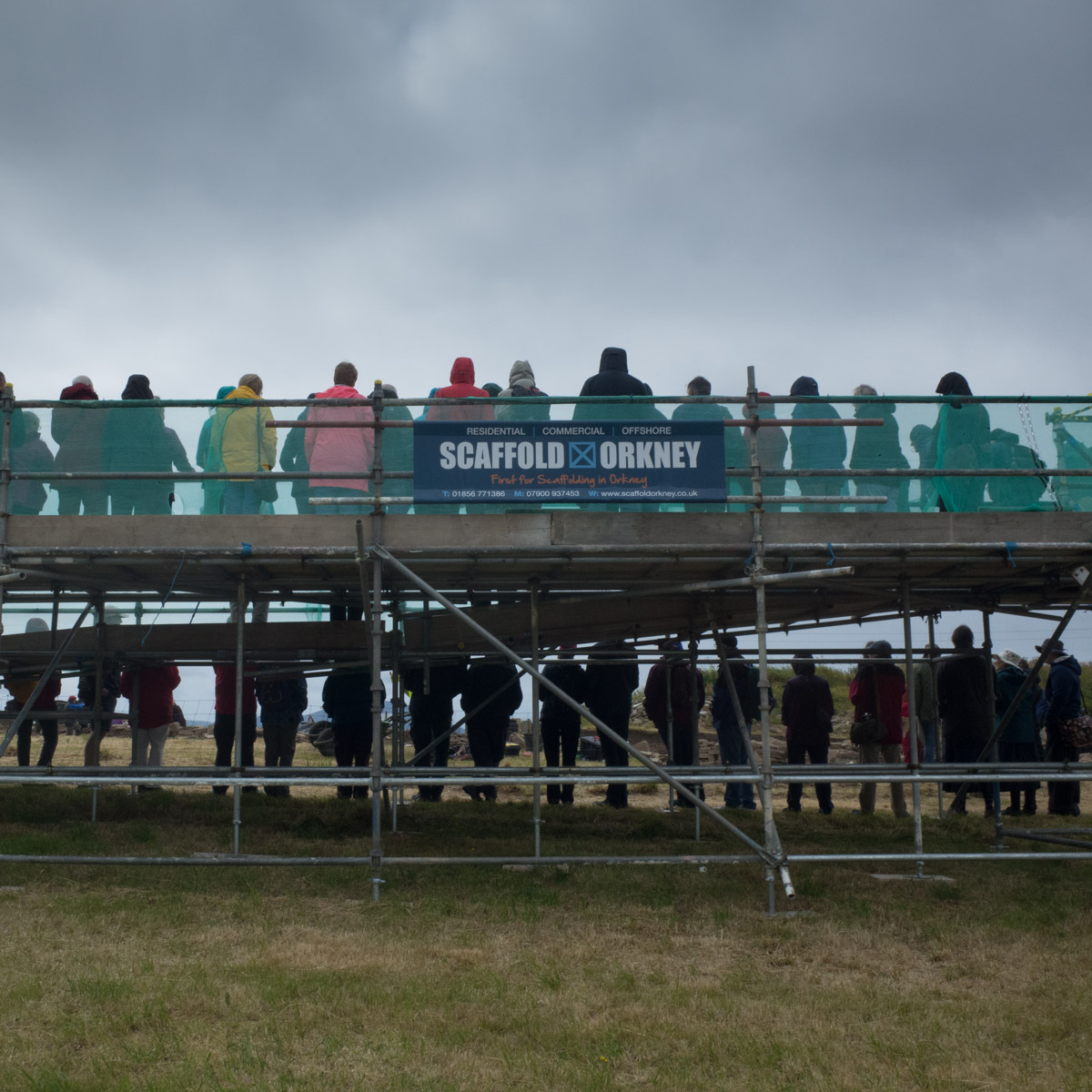 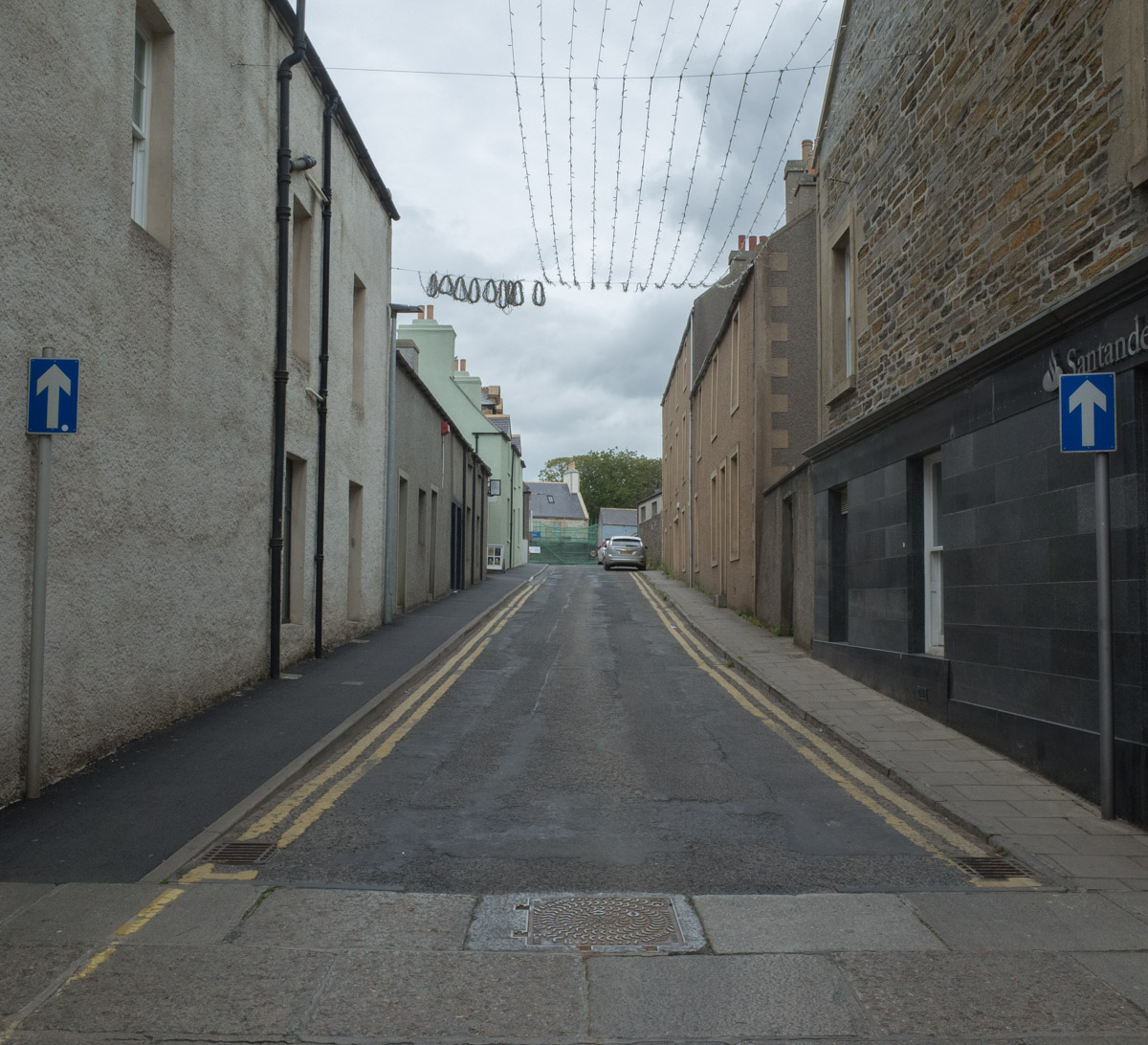 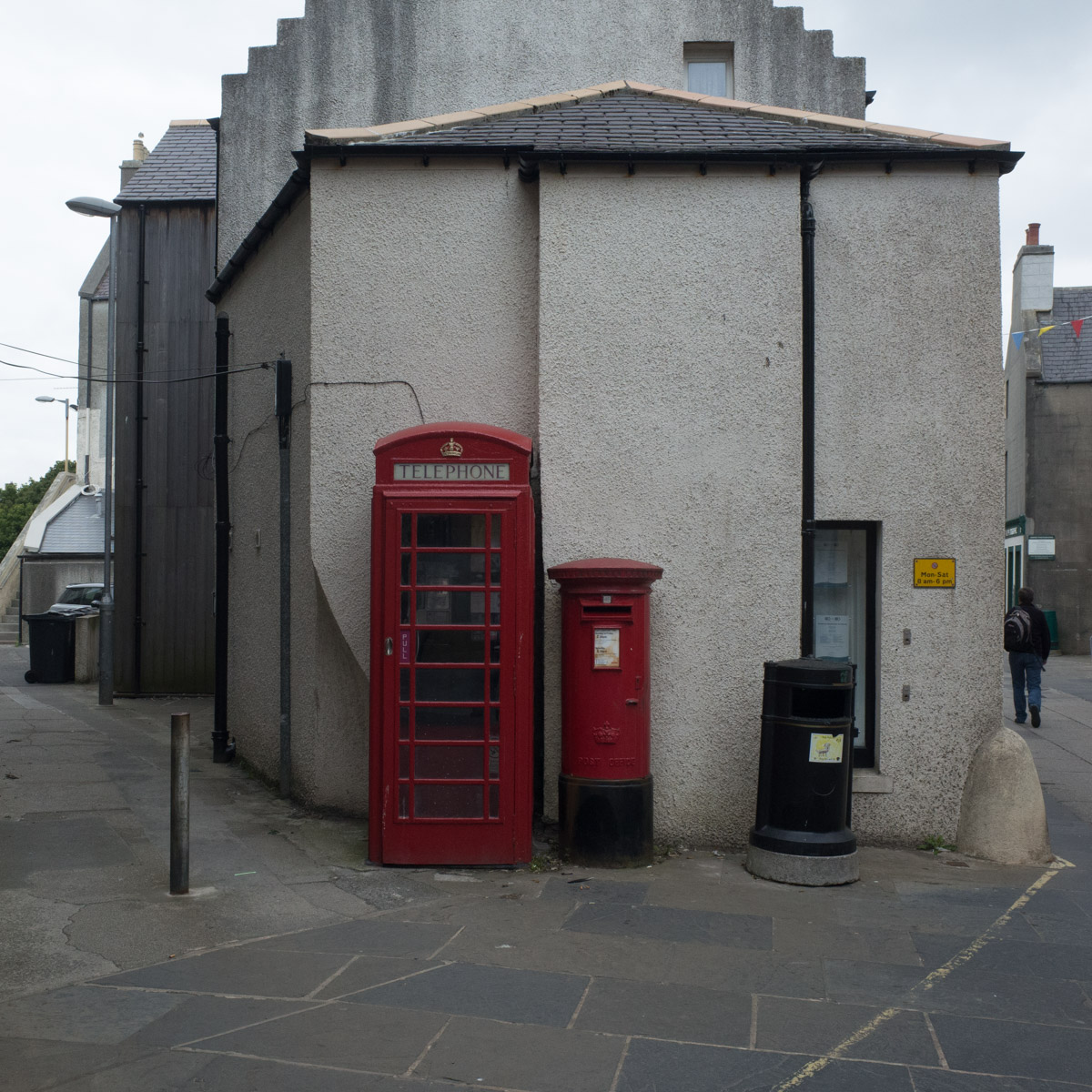 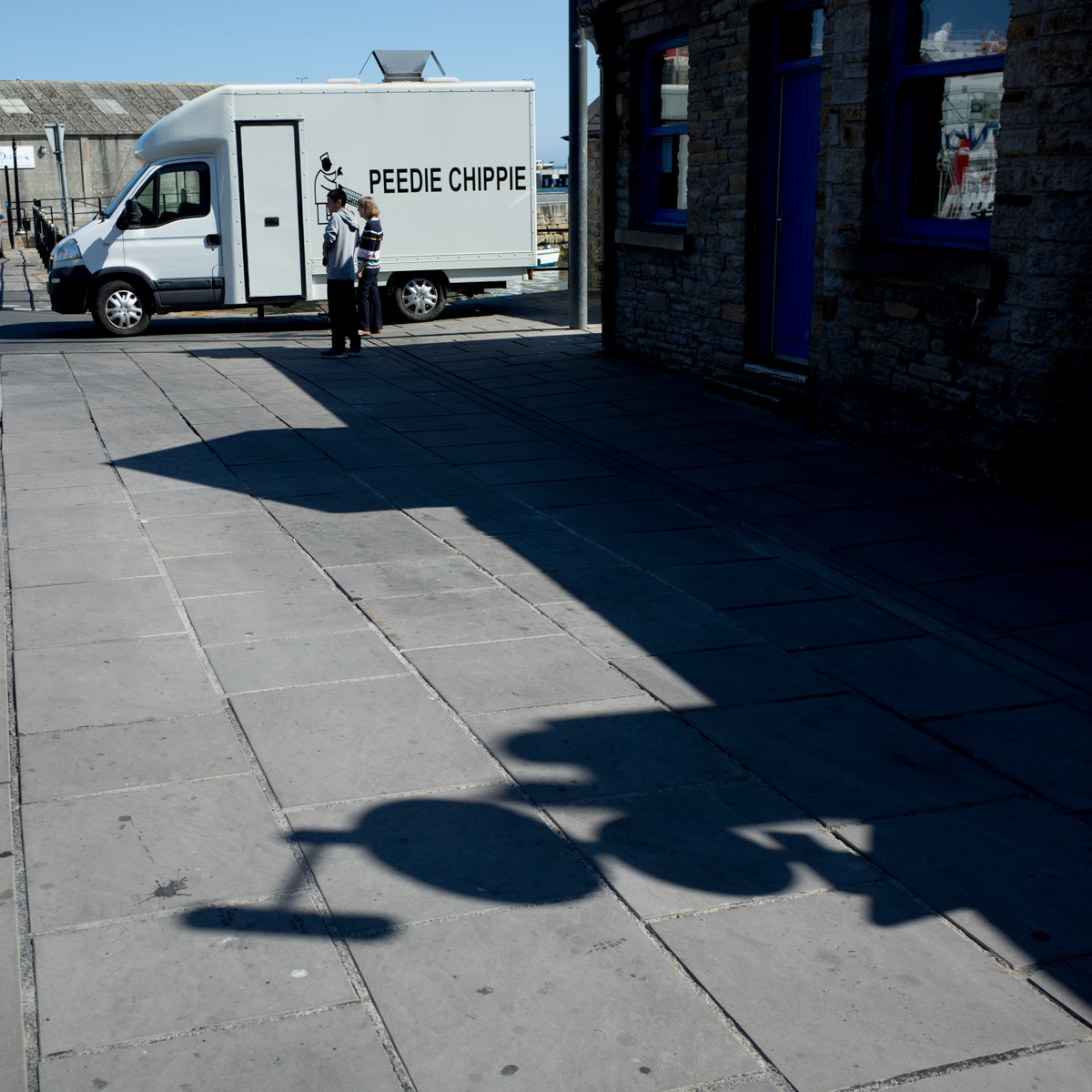 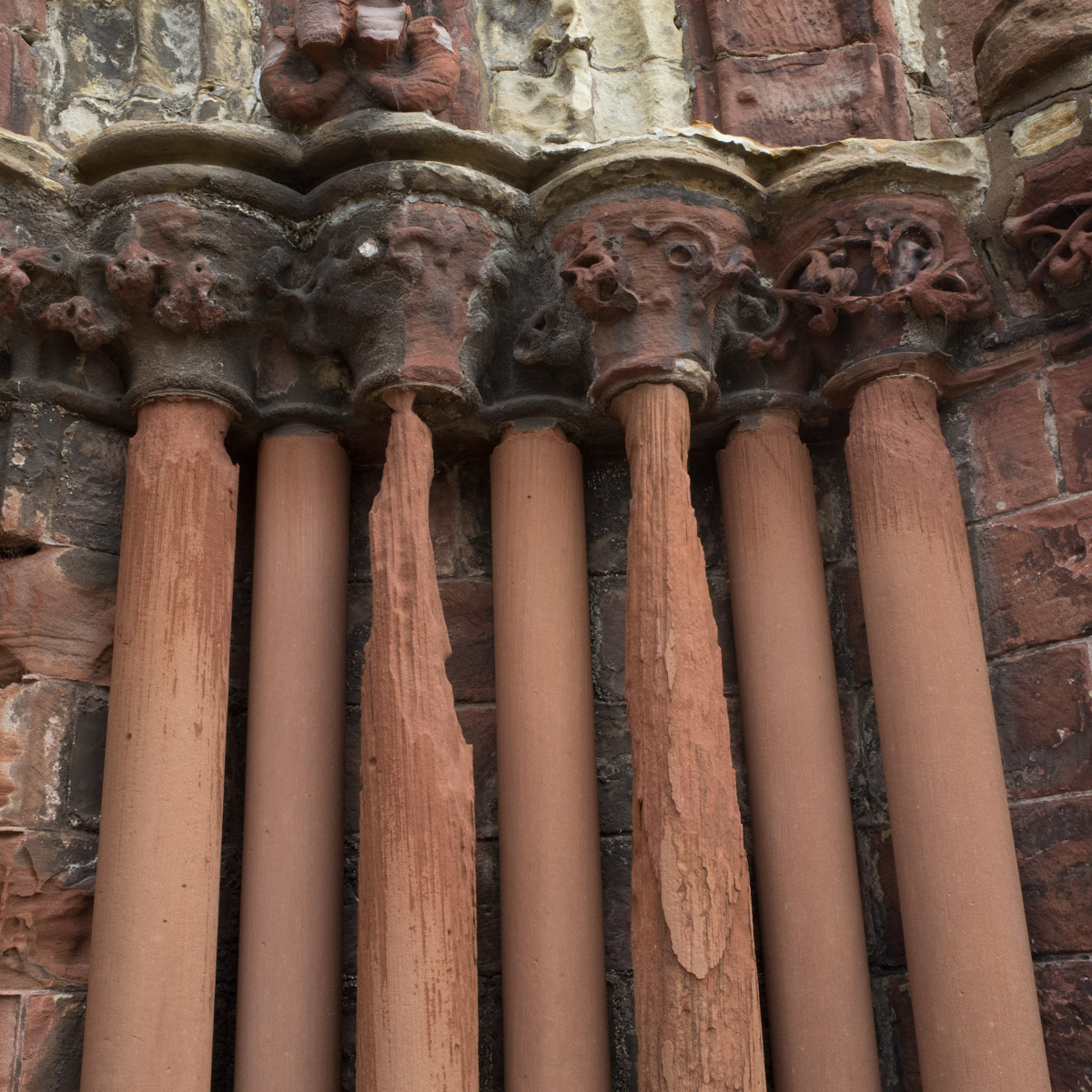 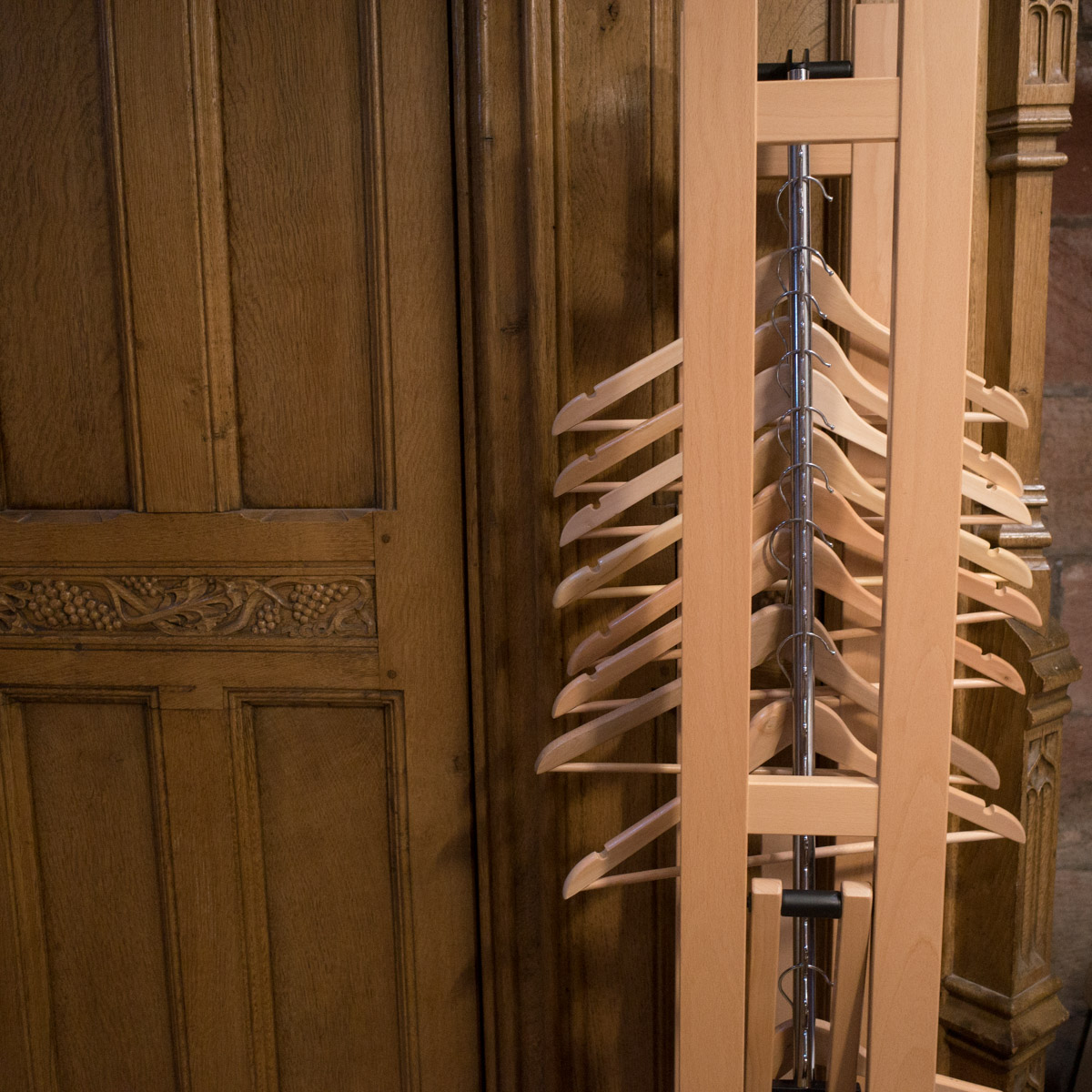 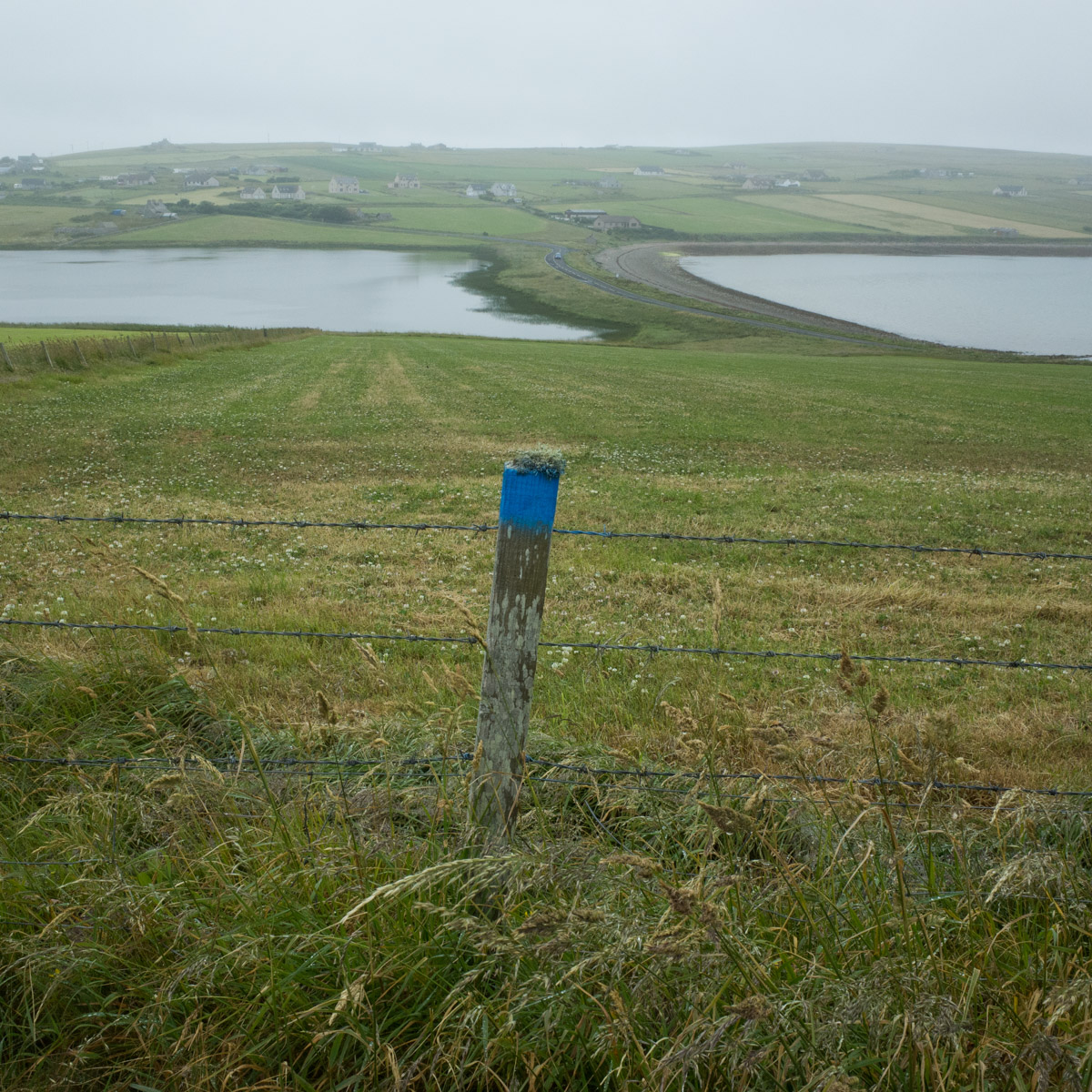 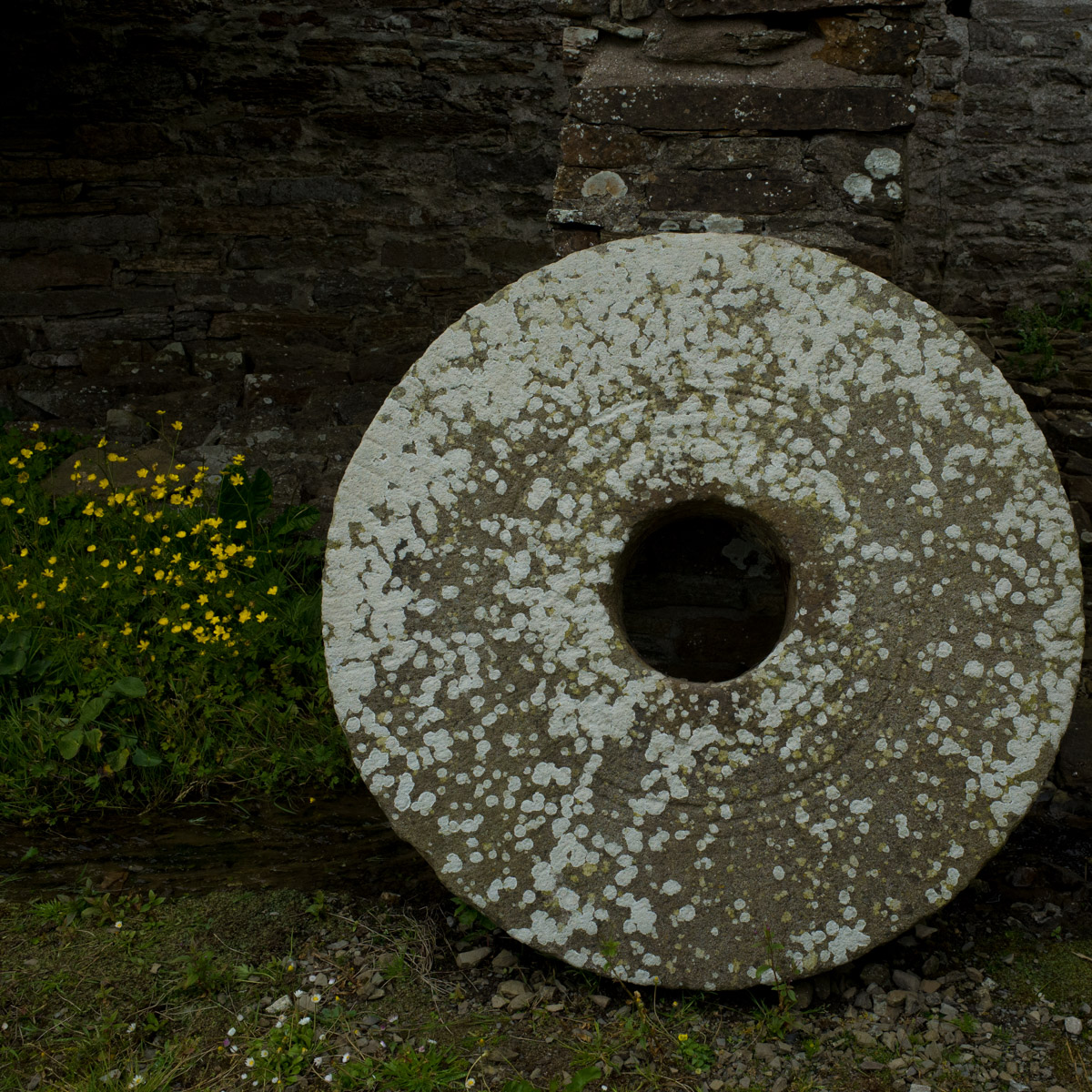 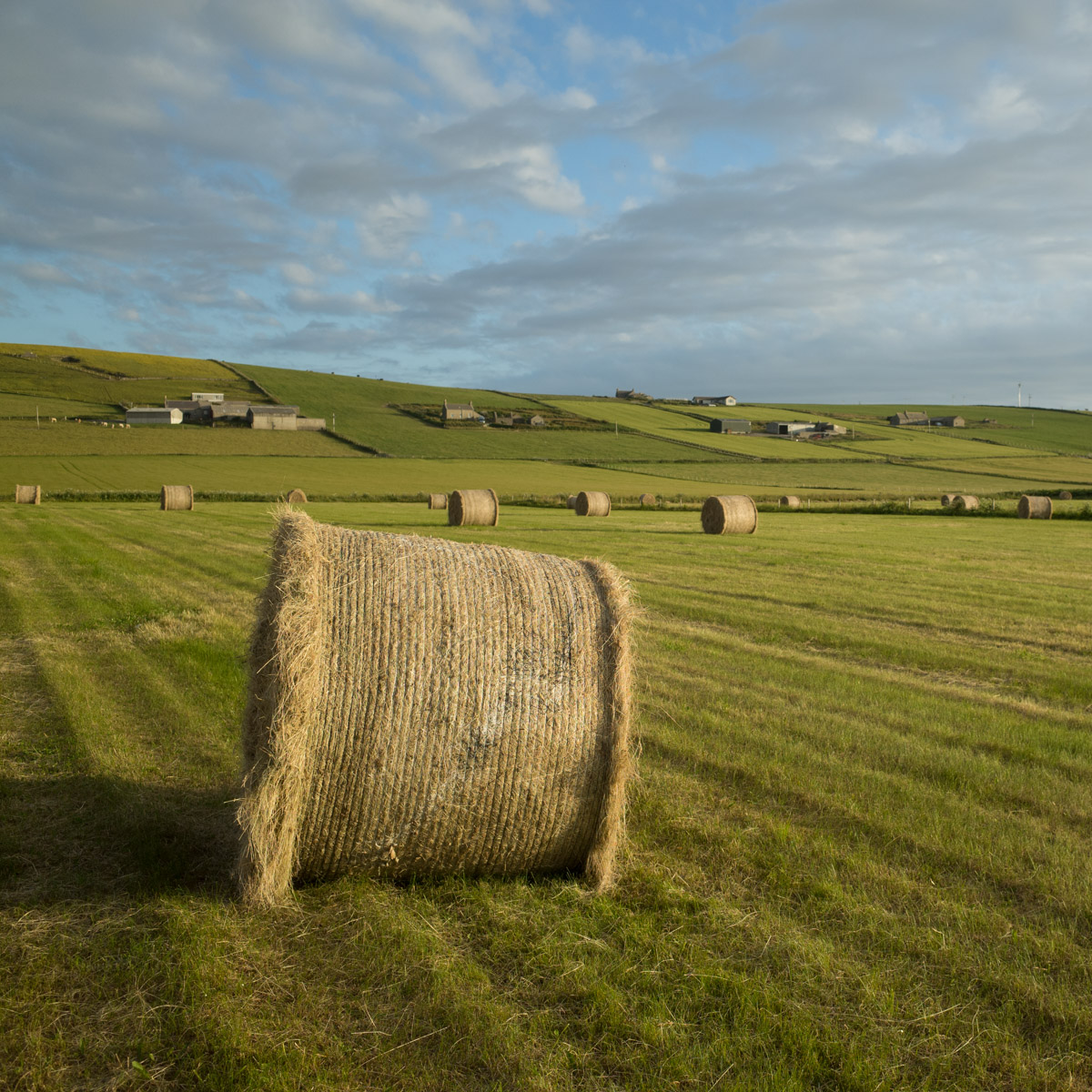 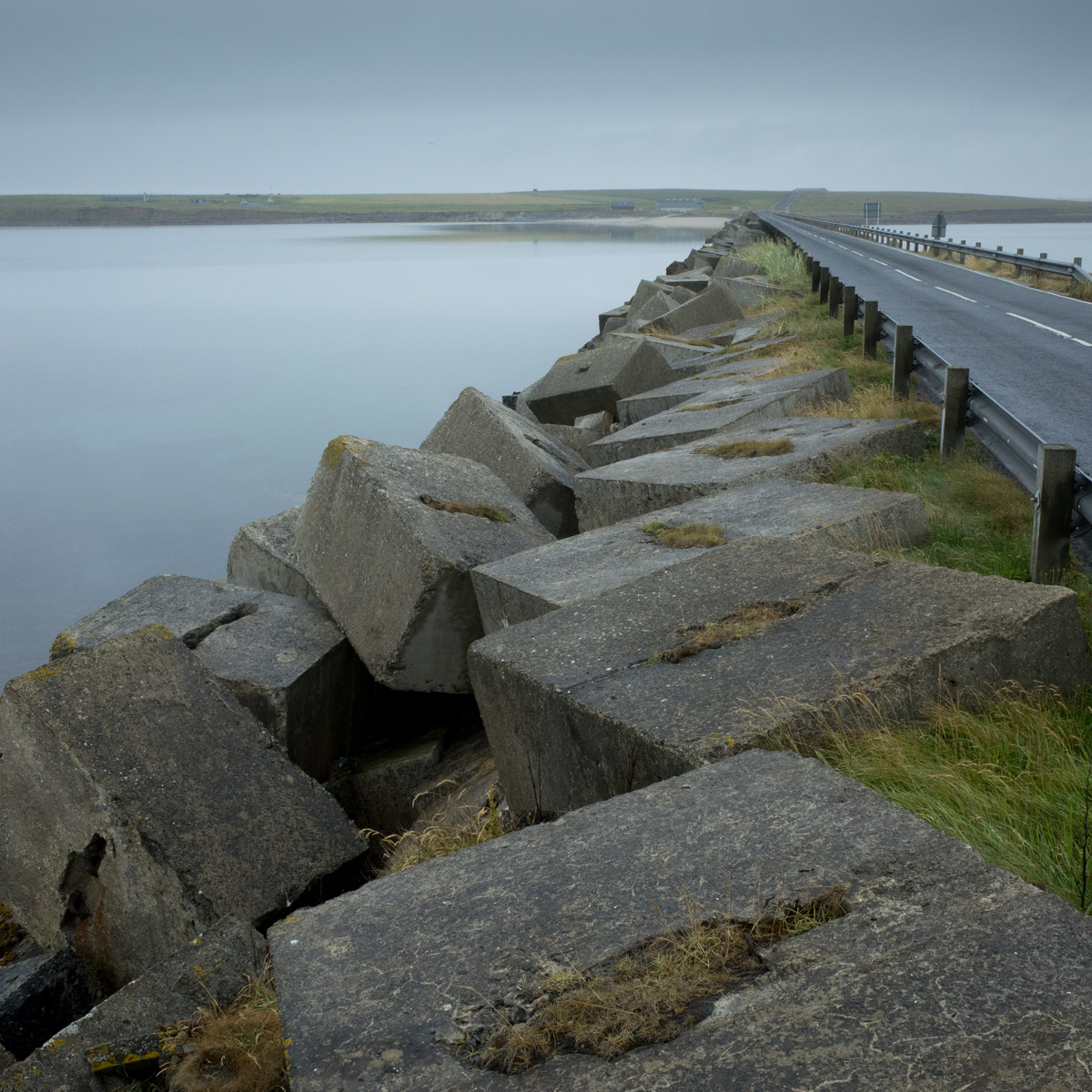 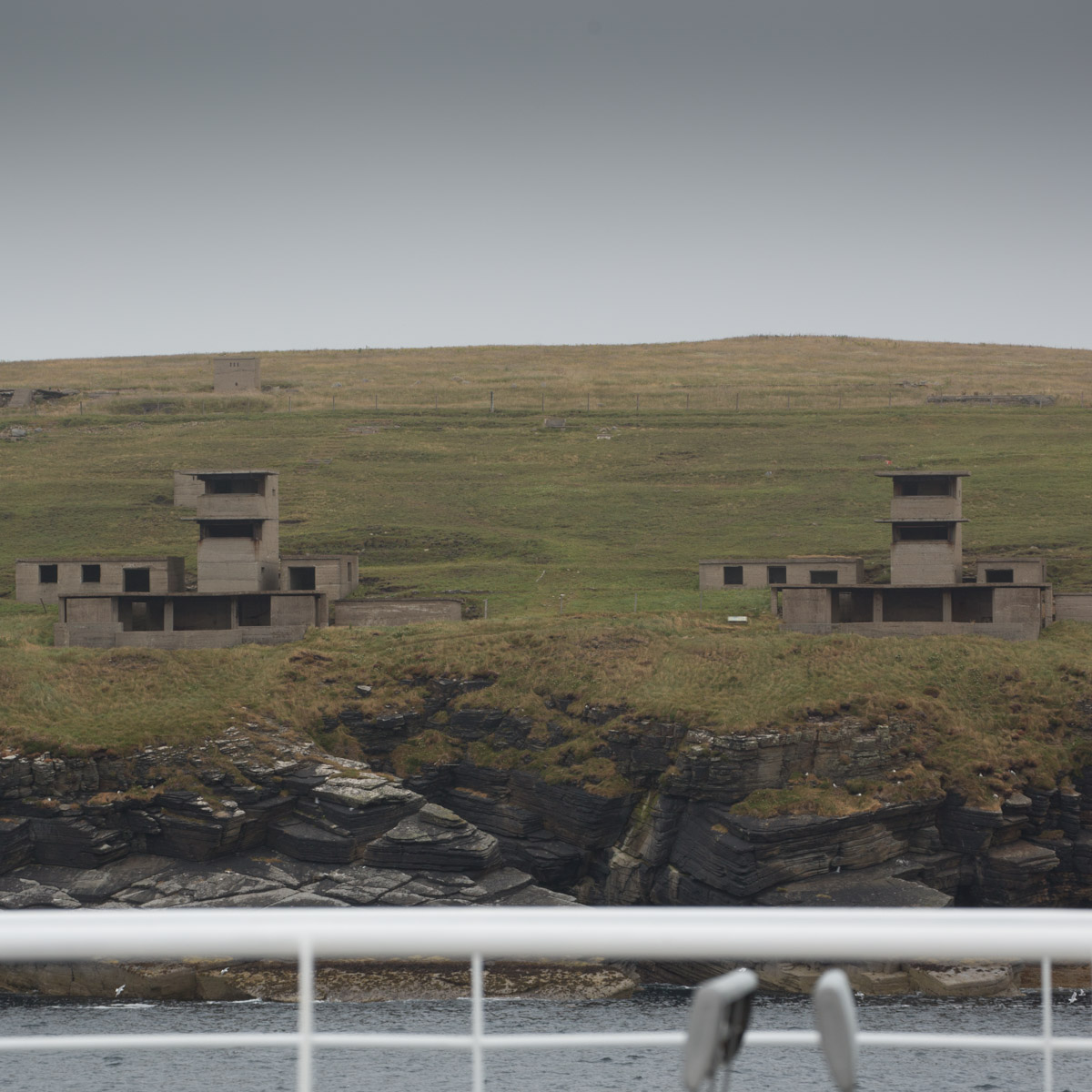 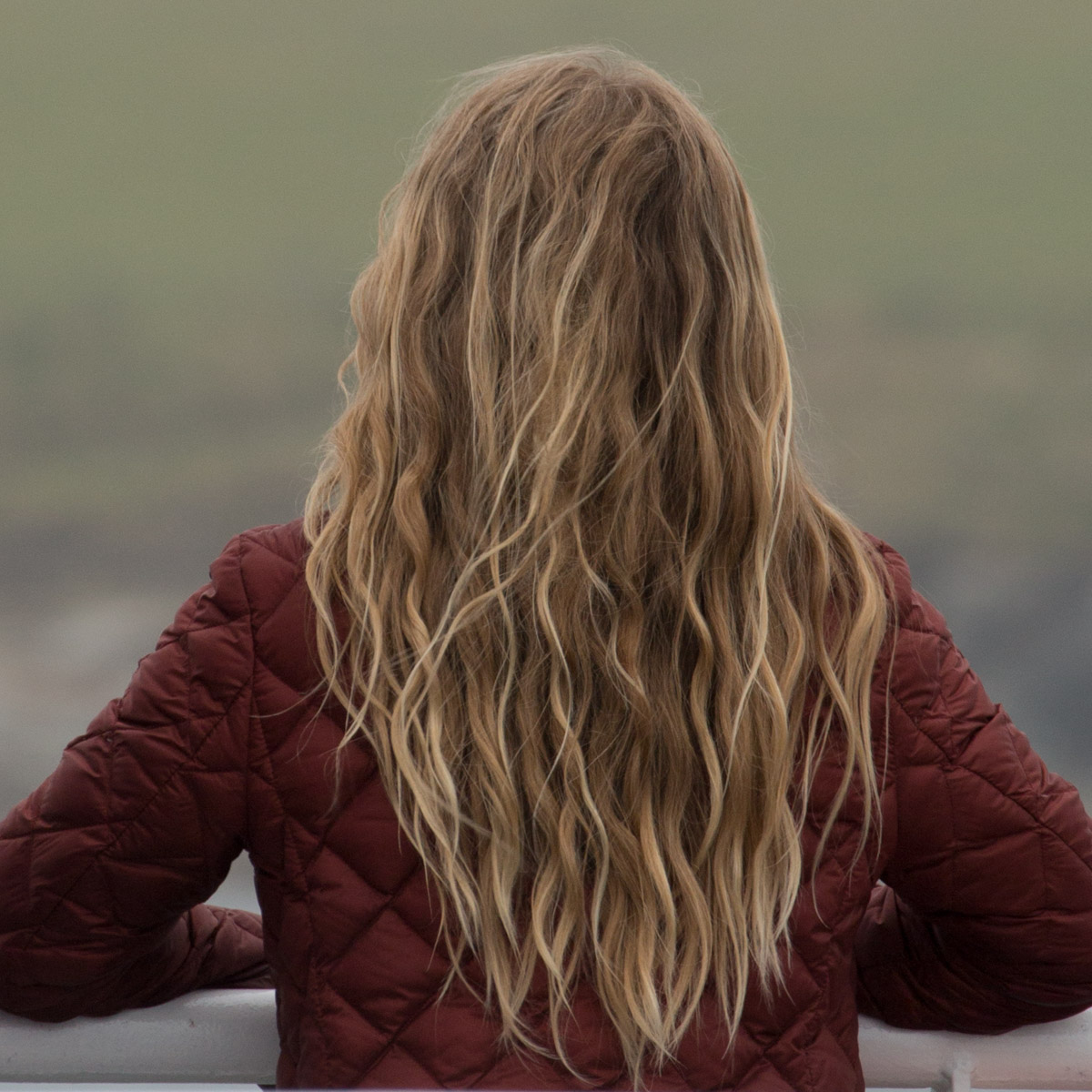