And the award for World Press Photo predator goes to …

2: one who injures or exploits others for personal gain or profit

The World Press Photo award winners are announced tonight. The top prizes come with a tidy £10000 and an audience of millions.

Number one takeaway is that if you want to get on fast in the industry then cheat, lie and don’t go beyond seeing the black and brown people in the pictures as more than mannequins upon which to drape light.

It’s OK, the end justifies the means, even if your name is Marco Gualazzini and you get caught.

Italian Gualazzini is a real winner. He’s on the shortlist for World Press Photos two top prizes, standing to make 20000 euros.  Never missing out on the chance to make a game-show spectacle of suffering the winners will be announced at a ceremony tonight.

My problem with Gualazzini winning is that he’s a liar and a cheat.  Don’t take my word for it. Last year he was kicked out of the KL photo awards for exactly those reasons. And yet just a few months later he’s on the shortlist for two of the top prizes in world photography. Photojournalism is an industry that rewards racist stereotypes delivered by cheats.

So what’s the story?

In 2017 Gualazzini published a series of photos of fully identifiable Indian women and children who he claimed had been raped.

Why is that even an issue?

In India (as in the UK) it’s illegal to take and publish a photo of child and identify them as a survivor of sexual abuse. I’ve been told by a number of Indian journalists that identifying a young women as having been raped puts them at serious danger of being harmed. One very respected journalist I consulted with said ‘this can get people killed in rural India’.

Killed.  Let that sink in. 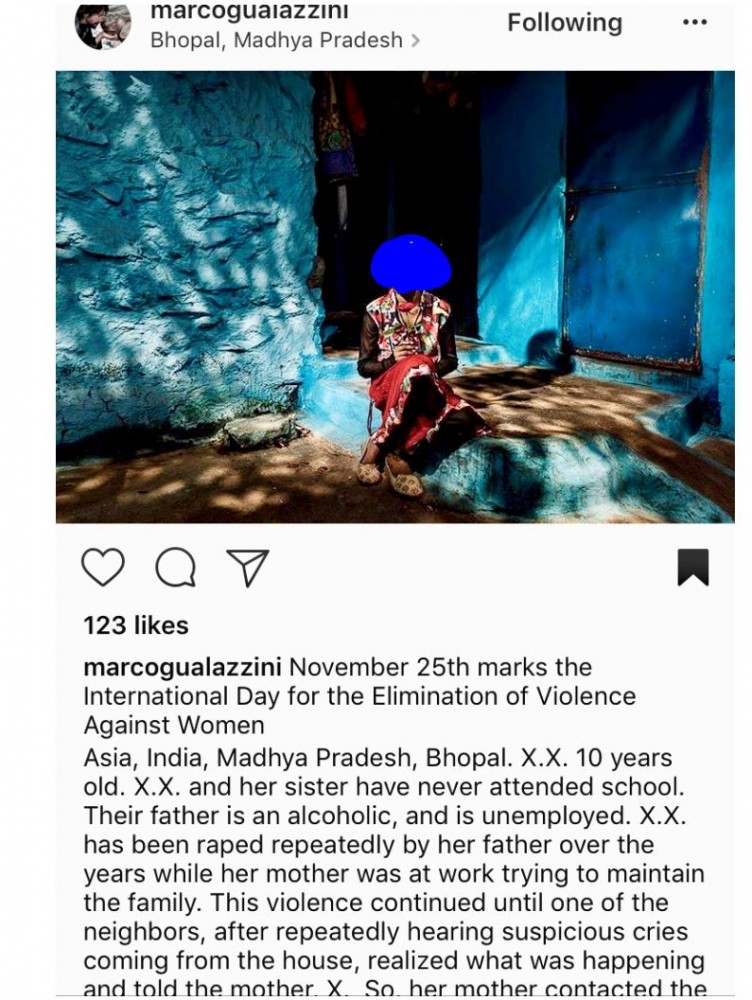 In this example the child is just ten years old and cannot meaningfully consent to her picture being used in this way. A permanent digital record is created that she has been raped repeatedly by her father.  You can imagine what that might do for her marriage prospects in an Islamic part of rural India. Or anywhere in the world.

For a number of years the acclaimed Indian photographer Smita Sharma has been working on stories relating to sexual abuse of children in India. She respectfully wrote to Gualazzini pointing out that not only were the photos he was publishing illegal in India but they risked putting the children at harm.

Gualazzini ignored Sharma. In her own words ‘Marco didn’t bother to respond to a “brown woman” photographer’.

Sharma wrote to me and a few weeks later I raised the issue publicly with Gualazzini and he took the posts of the children down. He left up a photo of a young woman captioned:

‘Talat Khan is an 18-year old Muslim girl who was married off at the age of 13 to settle her father’s gambling debts. The marriage soon degenerated into continual abuse and domestic rape on the part of her husband …’ 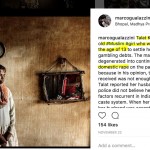 Gualazzini wrote to me on Facebook stating ‘that I didn’t know anything’ about him.

That’s true.  This is where the story starts to get nasty.

Last year Marco entered these pictures into the KL photography awards.  On June 25th 2018 K L Photo awards announced their finalists among which was Marco’s photo of Talat.

Sharma wrote to the organisers of the competition to raise her concerns.

From her own experience of working with survivors of sexual abuse she did not believe that Gualazzini had informed consent.

KL photo awards put the allegations to Gualazzini and his response was forwarded onto Sharma.

He claimed that Talat and her parents were:

‘conscious, informed and aware on what I was doing and what I would use the picture for – publication and contests … moreover it was Talat’s choice to let me take her portrait in order to show the face of who is struggling for her own rights’.

KL awards took Gualazzini‘s response at face value (without speaking to the family) and he remained on the awards shortlist.

By coincidence later in 2018 Sharma was commissioned to shoot for the same charity through whom Gualazzini had gained access to Talat’s family. She was asked to photograph the same family. And that’s when she discovered just what sort of liar Gualazzini is.

In a video Sharma shot of Talat’s clearly angry mother shortly after she had been shown the Instagram she says:

What he’s written about Talat is wrong. The rape is not true. He should not have written it. It’s very wrong. If he comes in front of me I’ll put him to sleep (teach him a lesson). He is making fun of us.

The translator told me that the woman is upset, angry and ashamed.   He also told me that Gualazzini’s actions could have got Talat killed.

Sharma went back to KL photo awards with this evidence and Gualazzini was removed from the shortlist.  The photos of the children were published in Vanity Fair Italy.

This is the truth about Talat in Sharma’s own words:

Talat’s last name is **** not Khan. Her age is 26 not 18 and she is a brave empowered woman who rides auto-rickshaw.  She is NOT a rape survivor but a domestic violence survivor. Her mother was shocked to see what was written about her daughter and requested me to do something about it. I have a video of her mother and can send if necessary. So clearly Marco wrote a wrong story about Talat. He completely made it up.

In a time that news has never been under such scrutiny for being ‘fake’ the guy who is about to walk the stage at World Press Photo and pick up the world’s top photojournalism awards is happy to ‘completely make it up’, whilst at the same time putting the lives of women at risk.

If that doesn’t make Gualazzini dangerous and bring the industry into disrepute, what does?

I wrote to Gualazzini several weeks ago. He did not respond.

I was also interested in organisations that facilitate Gualazzini’s work.  In the photo beneath that he published on Instagram, a named, clearly identifiable 13 year old child is captioned as having been raped and then given birth to twins.  Alongside this he’s written hashtag love.  Followed by hashtag canon photos.  Followed by hashtag everydayafrica. 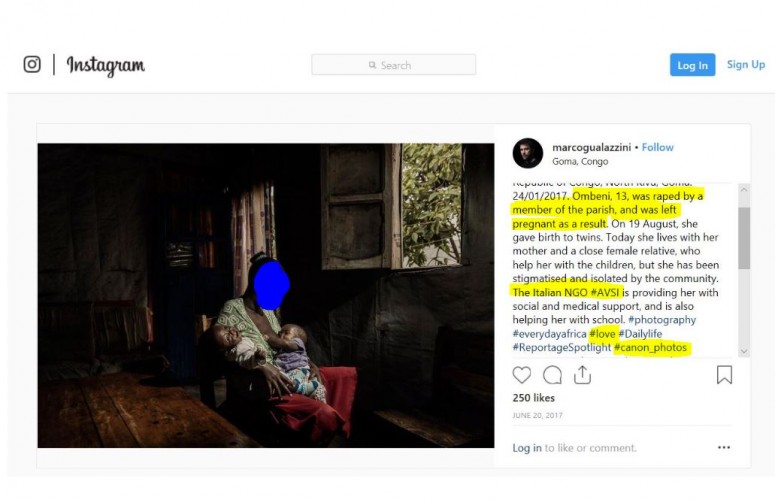 This was not the only disturbing work of Gualazzini that I found in the Congo. A documentary films he made included video of boys taking a shower. 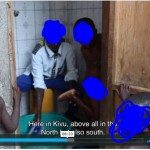 Again if a man walks into a shower in an orphanage in the UK and starts filming naked children he would be arrested. If the images were considered indecent (naked boys showering) he would be prosecuted and go on the child sex offender register. In law there is no defence that relates to the intent of the person filming, only the content.

There is a long and fetid history of white men abusing children in Africa because they get away with it.  I’m not suggesting for a moment that Gualazzini is one these men but even the remotest understanding of that history should have prevented him from entering and filming in that space. The camera seemingly gives him privilege over all other considerations.

The charity that facilitated the photo of the child rape survivor is AVSI.   I wrote to their director of Comms, Maria Laura Conte.

I am wondering what your charity’s position is on the picture of the 13 year old child rape survivor with twins that appears on his Instagram feed with the hastag #everydayafrica! The caption suggest that AVSI facilitated the photo. The youngest child that Marco identifies with a photo, name and location is just 11. Given the stigma that women face I’m wondering how it is in their best interest to have fully identifiable pictures taken and shared on the internet? As someone who used to run a sexual and reproductive health project in Ethiopia to me this is extremely troubling. I am also wondering if your charity carried out a risk assessment in relation to Marco? I note in one video he is filming naked children showering at an orphanage. I would appreciate any comments you have to make on this matter.

Conte did not respond to me. Shortly afterwards the image I flagged was taken down and this appeared in its place.

In the end you have to question why the photojournalism world and particularly World Press Photo continues to award, fund and distribute the work of men who abuse the privilege of being white and having a camera. Who put the lives of women at risk.  In an interview with BJP magazine Gualazzini couldn’t be clearer about what motivates him:

For me the World Press Photo awards are a profound gratification that leads me to believe that everything I have done, or that we as photojournalists do, is not something that is futile.

After reading this what is the justification for Gualazzini photos being celebrated and toured by World Press Photo? Clearly his work cannot be trusted and there is no reason to believe that he adopted a different moral code when photographing in Chad.  As a journalist he’s done. So is the World Press Photo exhibition if they platform him.

I prefer to end with the words of Smita Sharma. The gritty Indian photojournalist fighting the exploitation of her people. It’s her that should be standing on stage tonight, not exploitative predators like Gualazzini who continue to steal the limelight.

I am reporting this and have collected the evidence because I was not convinced and always knew something was wrong. It is because of photographers like Marco and the selfish kind, that our photography community gets the bad name. It is important that issues on women and children get highlighted, but in the right way without exploiting or re-victimising them. I have had tremendous problem in getting access in the work that I do, because of other insensitive photographers who work unethically. I don’t approve of parachute journalism, poverty porn and unethical work practise and have always taken them very seriously. As photojournalists, it is our responsibility to show people with dignity and respect and abide by the laws and code of ethics.

CORRECTION: In the original version of this post I wrote that Gualazzini had been stripped of a KL photo award. This was incorrect. He was shortlisted and then removed from the shortlist once the judges were made aware of Sharma’s concerns.