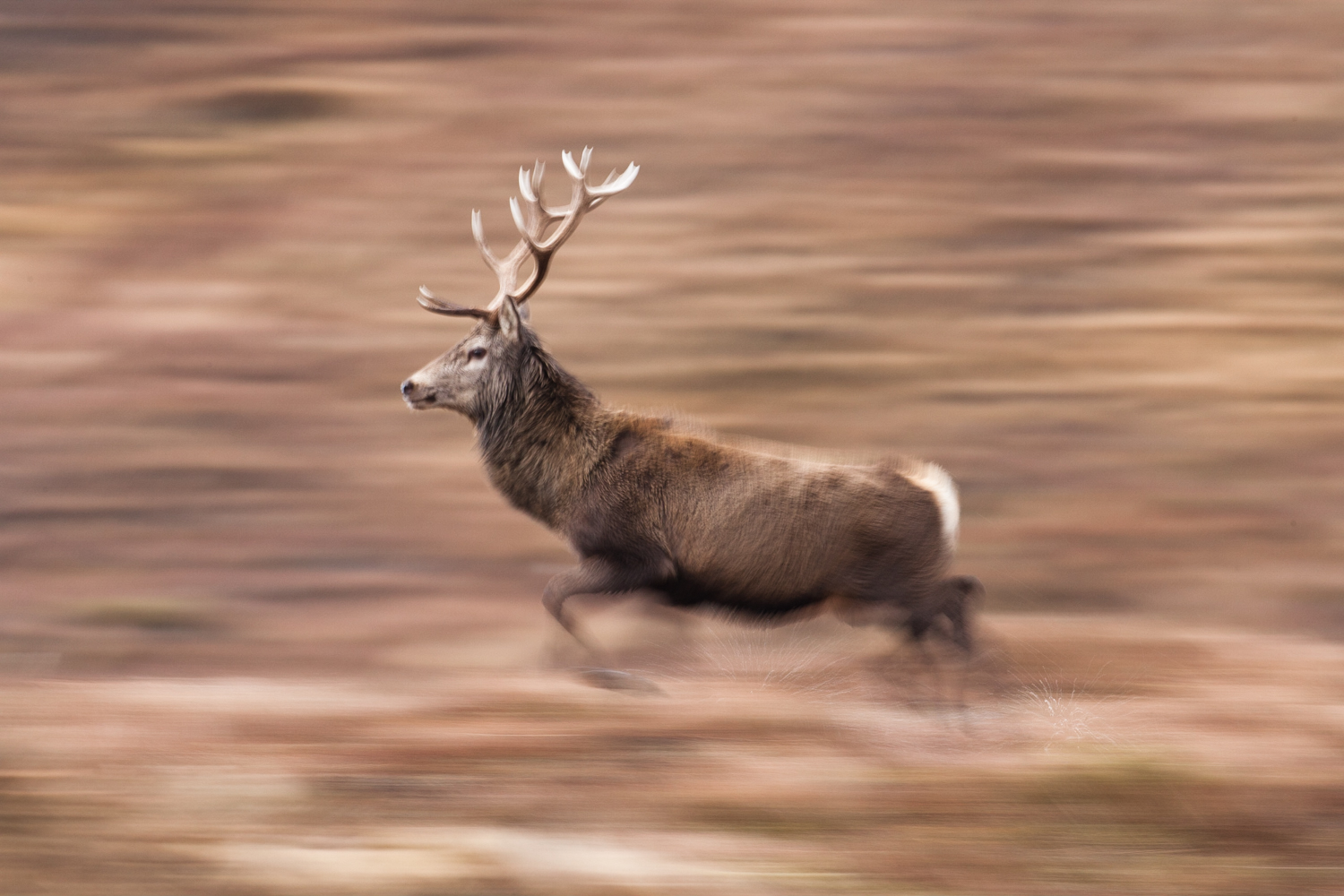 “Its none of your business why I don’t eat meat…” said Ian to me, abruptly and rather forcefully across the dinner table as I entertained a group of guests in a remote Highland sporting lodge, all gathered for a weekend of red deer photography. Ian had just noted the individual menus in front of us, his one detailing his preference of the vegetarian option, but an option of some class and culinary excellence which had delighted him. In the spirit of casual chit-chat I’d asked what his reasons for being a vegetarian were….and that sudden outburst had been his terse response…

“Fair enough!” I replied smiling, then immediately changed the subject in order to put the other, slightly taken aback guests at ease. It was our initial evening together, our first meal as a group, and I was anxous that it went smoothly. Crisis averted we enjoyed the sumptuous spread and the guests, some of whom had travelled over 500 miles to be here, relaxed and enjoyed the grand experience. 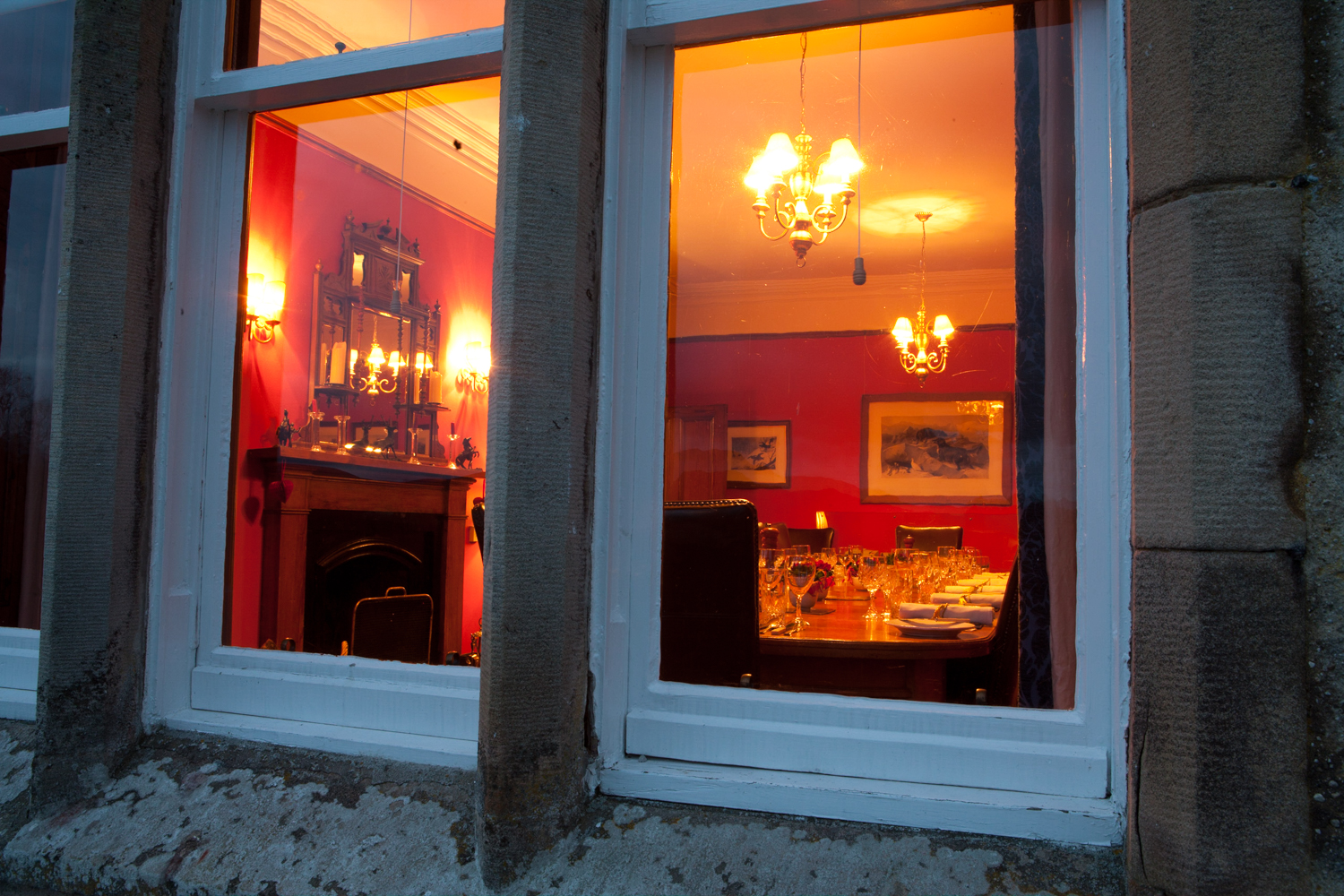 The Lodge at twilight with the dinner table set © John MacPherson

I was co-leading a weekend ‘red-deer safari’ with the Estate’s stalker Calum, each of us driving a Land Rover full of guests up the glen to photograph these impressive animals over Saturday and Sunday, with a full-on luxury sporting Lodge experience included. A long day in the field followed by tea and home-baked cakes followed by the best of the available local produce awaiting us each evening. Its a simple formula that works well, the stalker providing in-depth local knowledge about the Estate, whilst I offer photographic guidance and stories round the log fire after dinner. Depending on the time of year, if the Estate is culling, the guests can see the beasts being taken off the hill to the larder and some of the tasks involved in managing the carcases.

Next day we split the group, Calum the stalker taking Ian and his wife Ann in his vehicle, and we set off up the glen. It soon started snowing and the conditions were rather ‘atmospheric’ as we bumped and lurched several miles to where we knew we could photograph deer near an old lodge in which we could also light a fire and have our lunch in relative comfort. 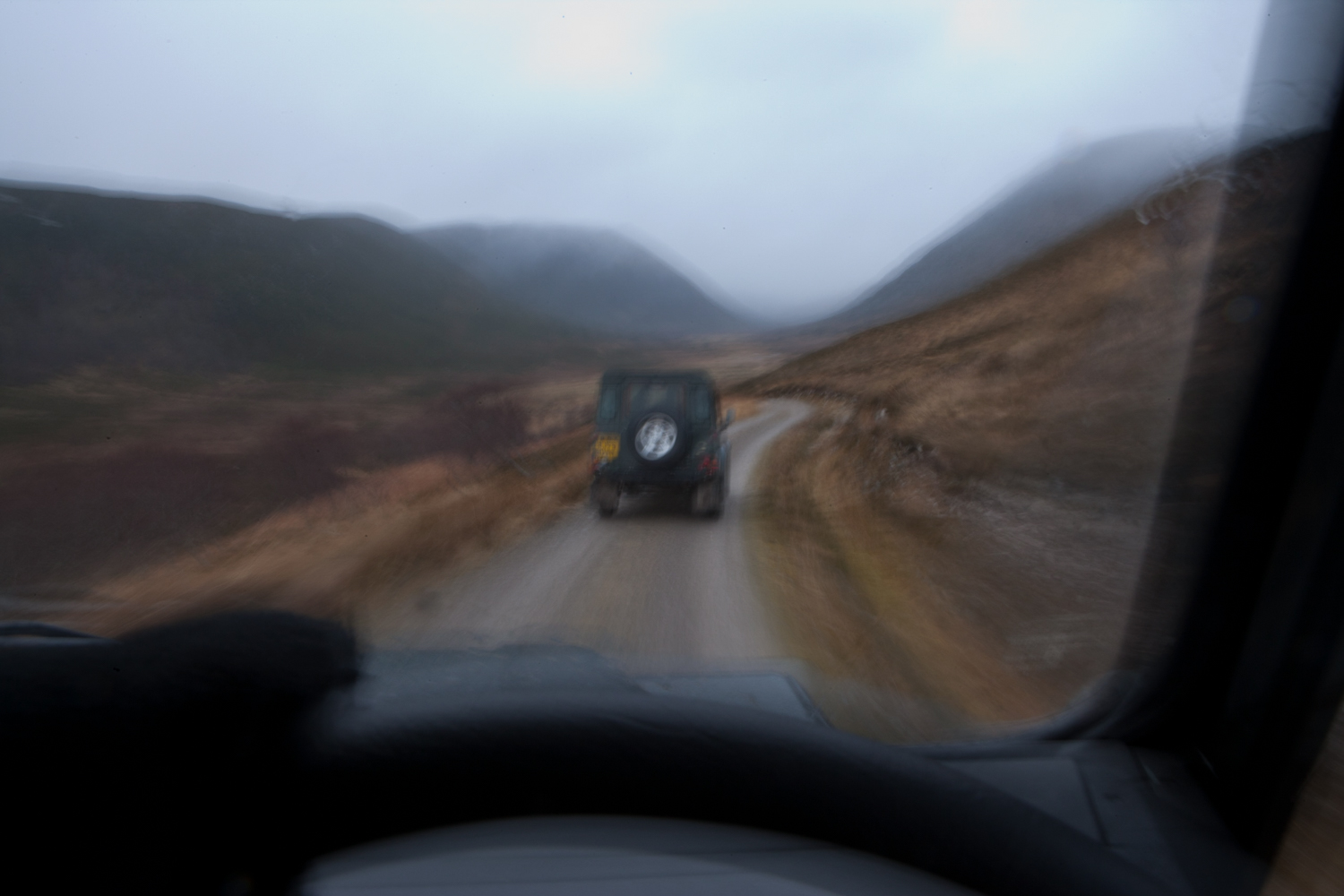 The deer, which are often fed during winter months, came closer to investigate our presence, accustomed to the familiar shape of the Land Rover. The snow swirled in, the deer vanished, then reappeared again as the shower temporarily eased. We huddled at the rear wall of the lodge trying to keep out of the worst of the chilling wind and snow. I looked round and saw Ian with Calum, deep in conversation. Calum was pointing at stags, Ian was looking at him quizzically then intently towards the animals, then taking photographs of them. I went in to the lodge and prepared the fire, got the tea on and we piled in for a break, steam rising off our damp clothes. Ian and Calum were still deep in conversation. 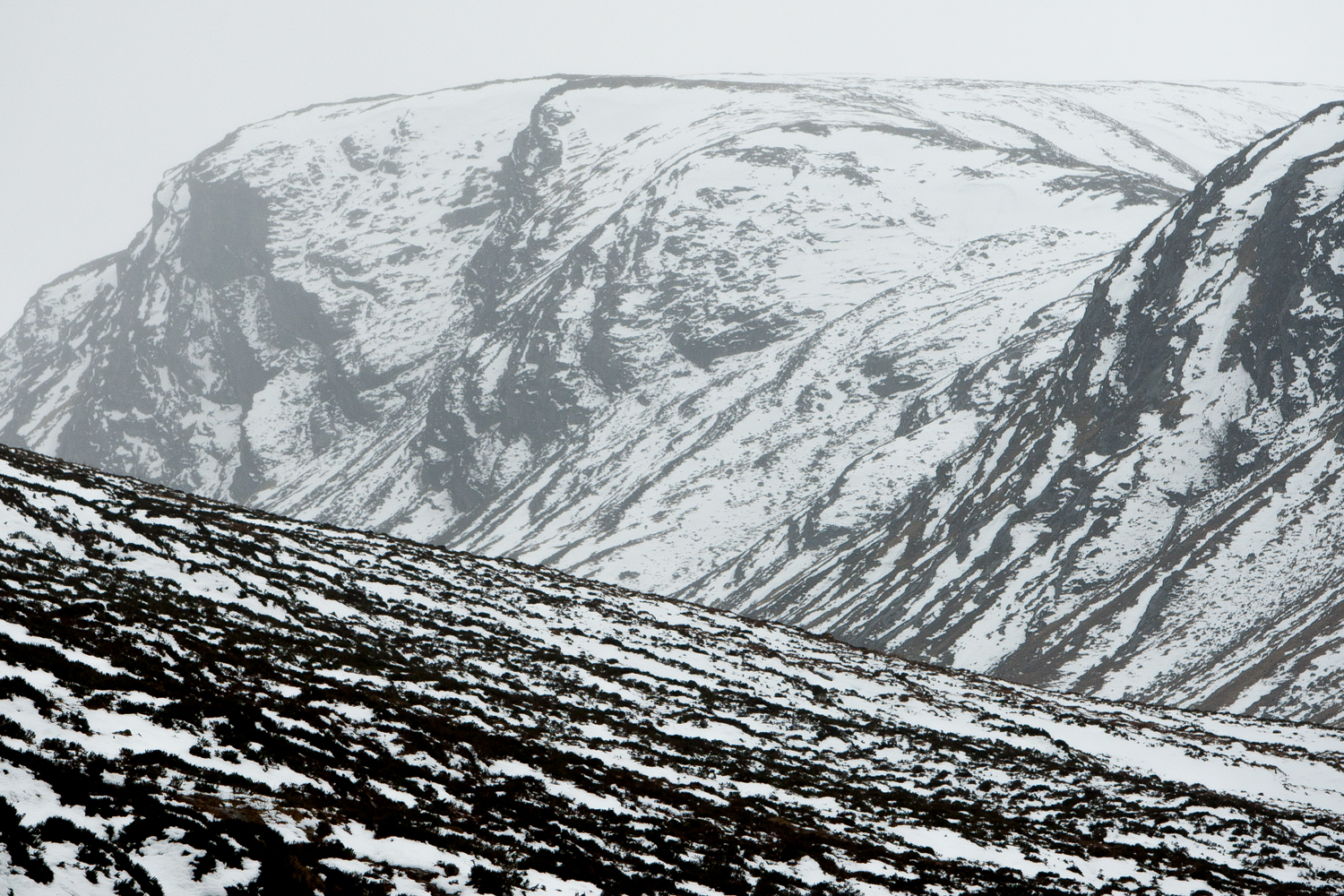 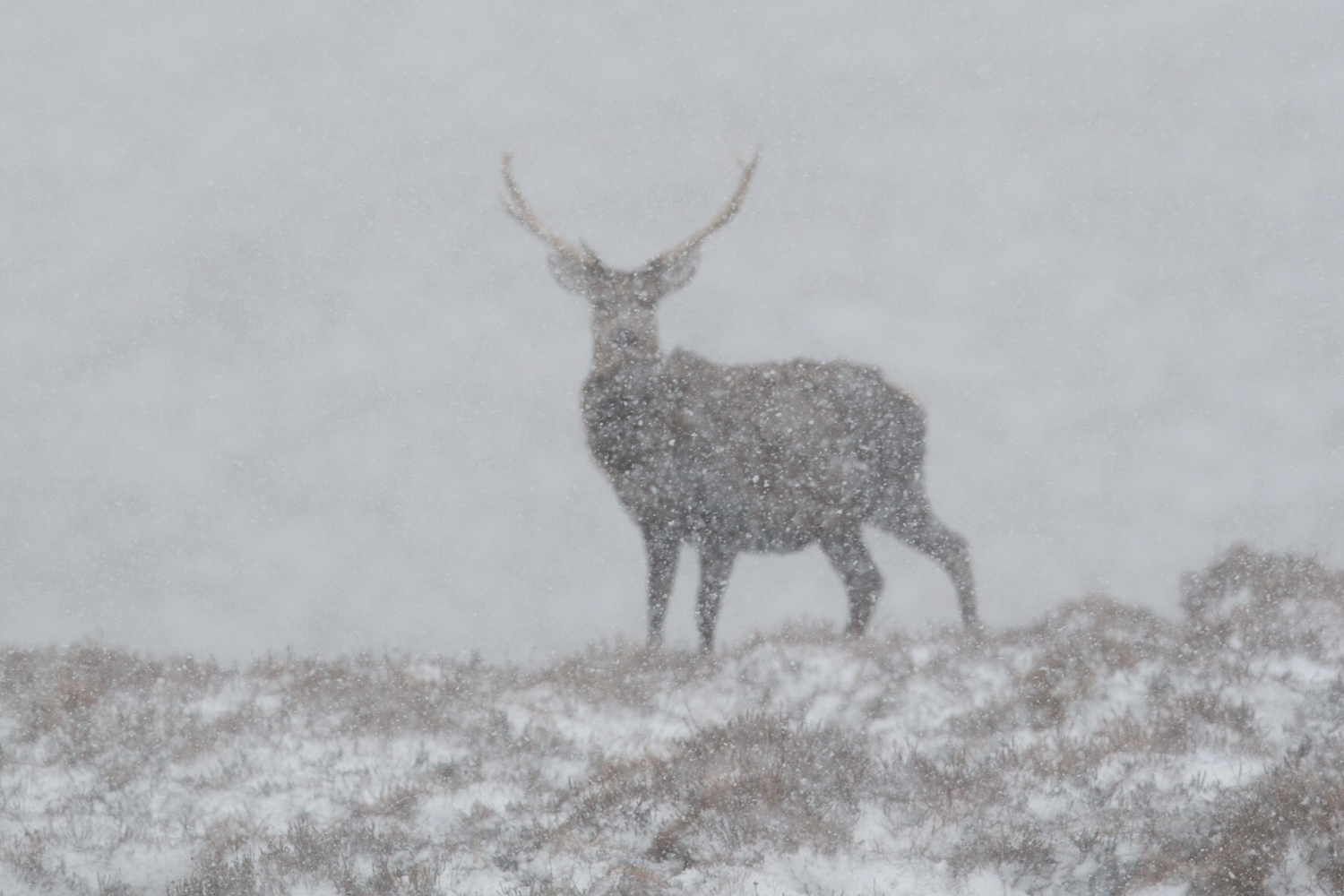 The snowstorm abated, light shafts cleaving the sky and the guests duly dashed outside to photograph it, as did I, all of us oohing and ahhhing before another blizzard rattled round us and enveloped the deer. Ian and Calum were still deep in conversation, staring directly at a scattered group of splendid looking stags, and I just overheard Ian say “Its father? Thats its father? How do you…” but my eavesdropping was interrupted by a guest needing advice on camera settings so off I went.

It was a good day, long and cold but photographically excellent, and the guests were delighted. We drove back down the glen to the main Lodge, Ian in the front seat of the other Land Rover with Calum, still deep in conversation.

The dinner that night was well-earned. Before I could speak Ian addressed me loudly and directly at the table as the first course was served, the other guests turning to listen, agog… “John, I just want to apologise for my outburst last night. My reasons for being vegetarian are complicated and not really something I wanted to speak about. But…but….” and he visibly wrestled with himself, his wife putting her hand on his arm to reassure him, so he continued… “…but I’ve had an experience today I really didn’t expect to have. I thought…go to the Highlands, take deer pictures, job done. But today challenged me in many way, challenged my preconceptions about a lot of things to do with deer management and hunting and meat..and…particularly people who kill animals…” and he stopped and looked pensive, turned to Ann and smiled then continued… “…and I’ve been sat in my room for the last hour or so talking about it with Ann and I’m honestly in conflict about it all and I’m going to have to think really deeply about this for quite some time to see if I can find some headspace to put this if you know what I mean….”

Everyone was transfixed. Cutlery held half-way to mouth, wine glasses poised in mid-air. 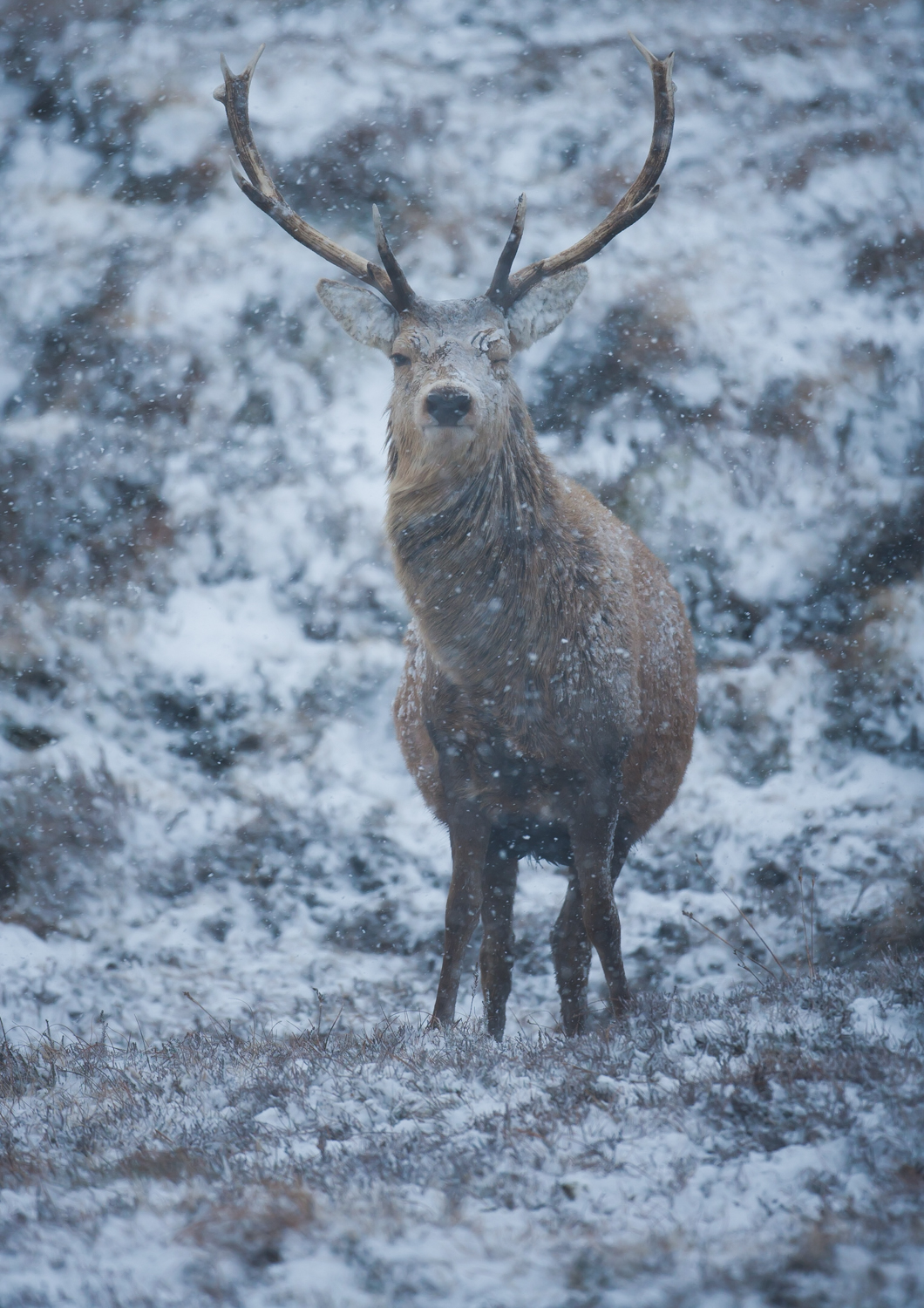 Ian sighed deeply, visibly moved…and continued… “Before I came up here I thought people who killed animals were barbaric, that it was cruel and unnecessary. Today changed that. I’ve sat all day up and down the glen in the Land Rover listening to Calum (who hadn’t joined us for dinner) and the way he talked about the place and the deer that live here was a revelation to me. When we were up the glen in the snow I went to photograph a particular stag and Calum said no, there’s a better one over there. So I asked what makes it ‘better’, and Calum explained about the shape of its head, and its antlers and the whole line of its body, its athleticism and grace, and I realised he was intimately acquainted with ‘his’ animals.

But then he floored me, saying that the particular stag I’d photographed is the offspring of an older stag who was hanging back behind the rest in the distance, and he talked about watching the youngster being born several years ago and seeing it grow over the seasons. And then he talked about culling the older animals and the injured ones, and what he uses, the calibre of the gun, and the training and accuracy required to ensure a clean quick death, and what he feels about that, the sense of duty – something he has to do and do well, killing the old animal as….well…as an alternative to it suffering tooth loss and winter starvation.

And I realised…hmm…I didn’t expect to be saying this to a group of strangers when I left home a few days ago…but I realised that when Calum dispatches a beast its not an act of cruelty, but…well…well I can’t think of any other word than ‘kindness’ its an act borne out of deep affection and concern for ‘his’ deer. I’d even use the word ‘devotion’. And I’m going to have to think deeply about this, about him and his connection with this place and what he does and why, and his ‘love’ of it all, because its not what I thought. Thats all I wanted to say, and thank you for the day out.” And he fell silent. 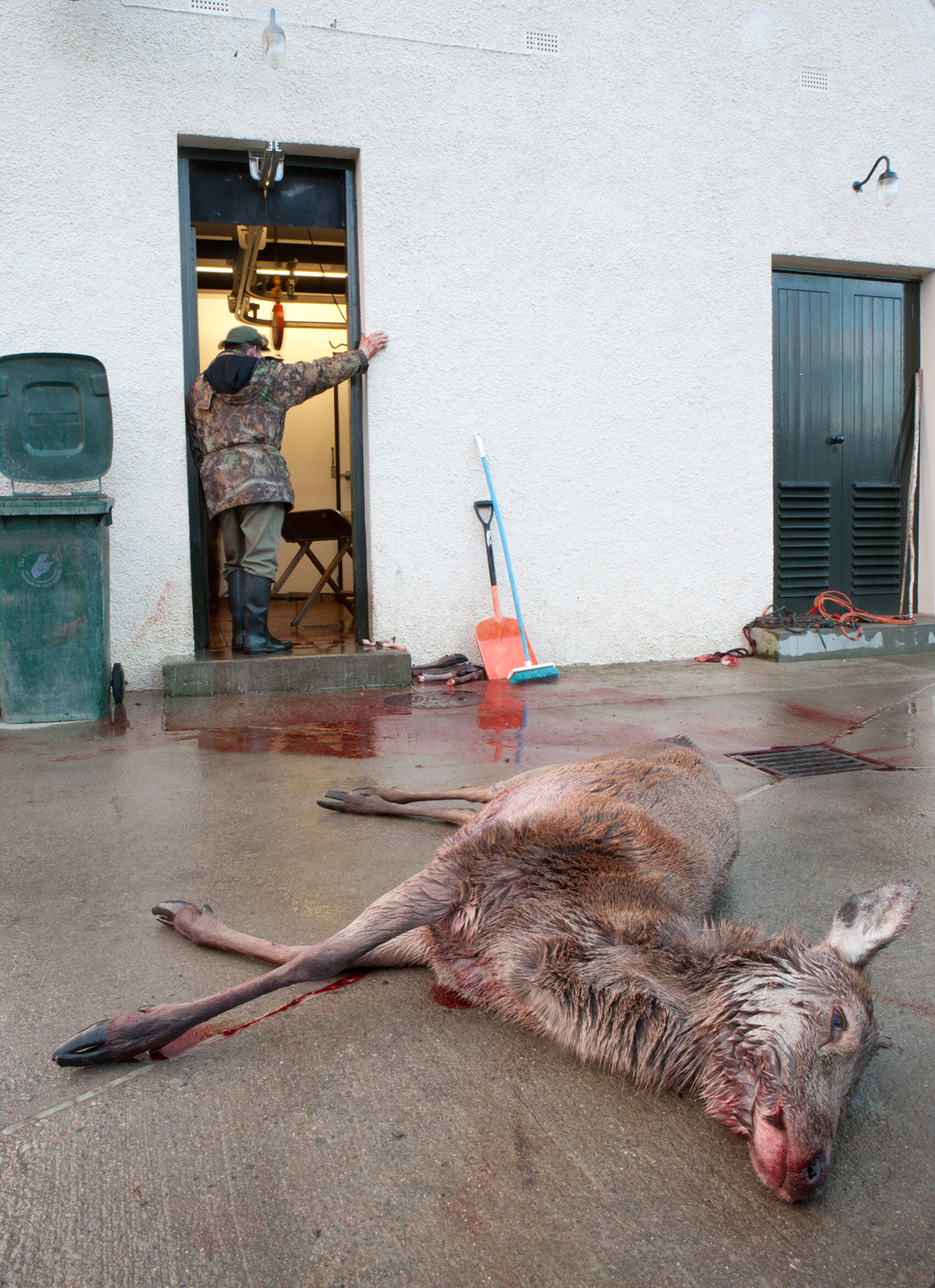 The reality of land management in the Highlands © John MacPherson

It was a profoundly moving moment for all of us. Some guests had no qualms about deer culling, others had never considered the ethical implications of Estate Management, and the gentle conversation that followed ranged far and wide around issues of land management, woodland development, rewilding, ethics, local food chains, road kill as an alternative to mass-produced meat, and animal welfare, a subject arguably of as much concern to (wildlife) photographers as stalkers.

It was a revelatory experience for me too. It underlined just how simple making a vital human ‘connection’ can sometimes be, and when you least expect it, simply a day out with someone with whom you may feel you have no common ground but discover your preconceptions challenged and your attitude somewhat changed. It was in great part down to the willingness of Ian to engage openly with the issues, but the foundation upon which this experience was built was the considerable knowledge and passion of Calum, most of whose adult life has been spent on the Estate, and his willingness to share that lived experience with others. 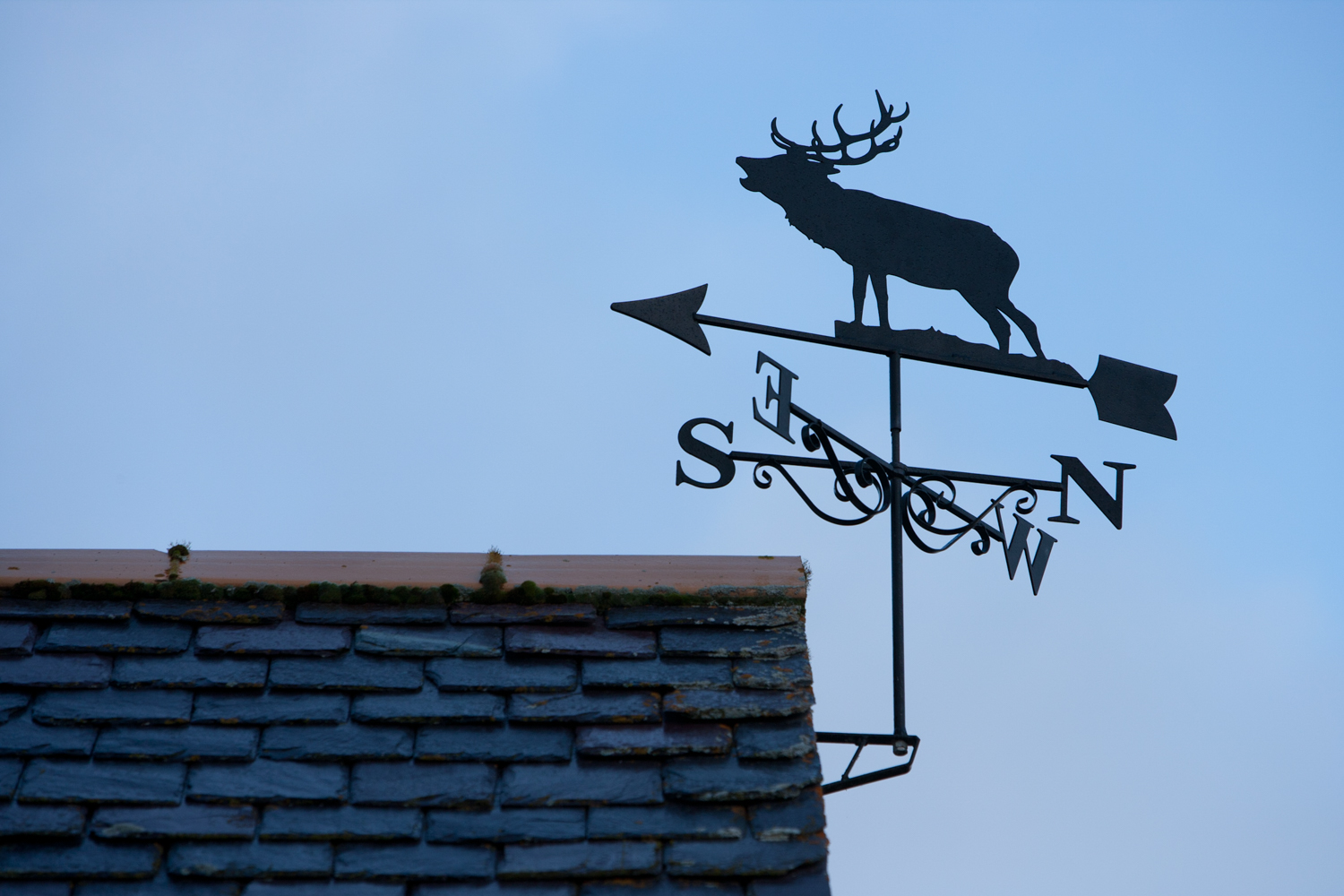 Estate Management, deer culling, hunting, rewilding and wider issues of ‘conservation’ and its implications are emotive subjects, you can go down the pub or more easily onto social media and get into some right old tussles in what can be a very polarized debate. But this experience I witnessed simply underlines that conversation, good old face to face conversing, listening and questioning, can be a powerful tool to allow common ground to be explored. 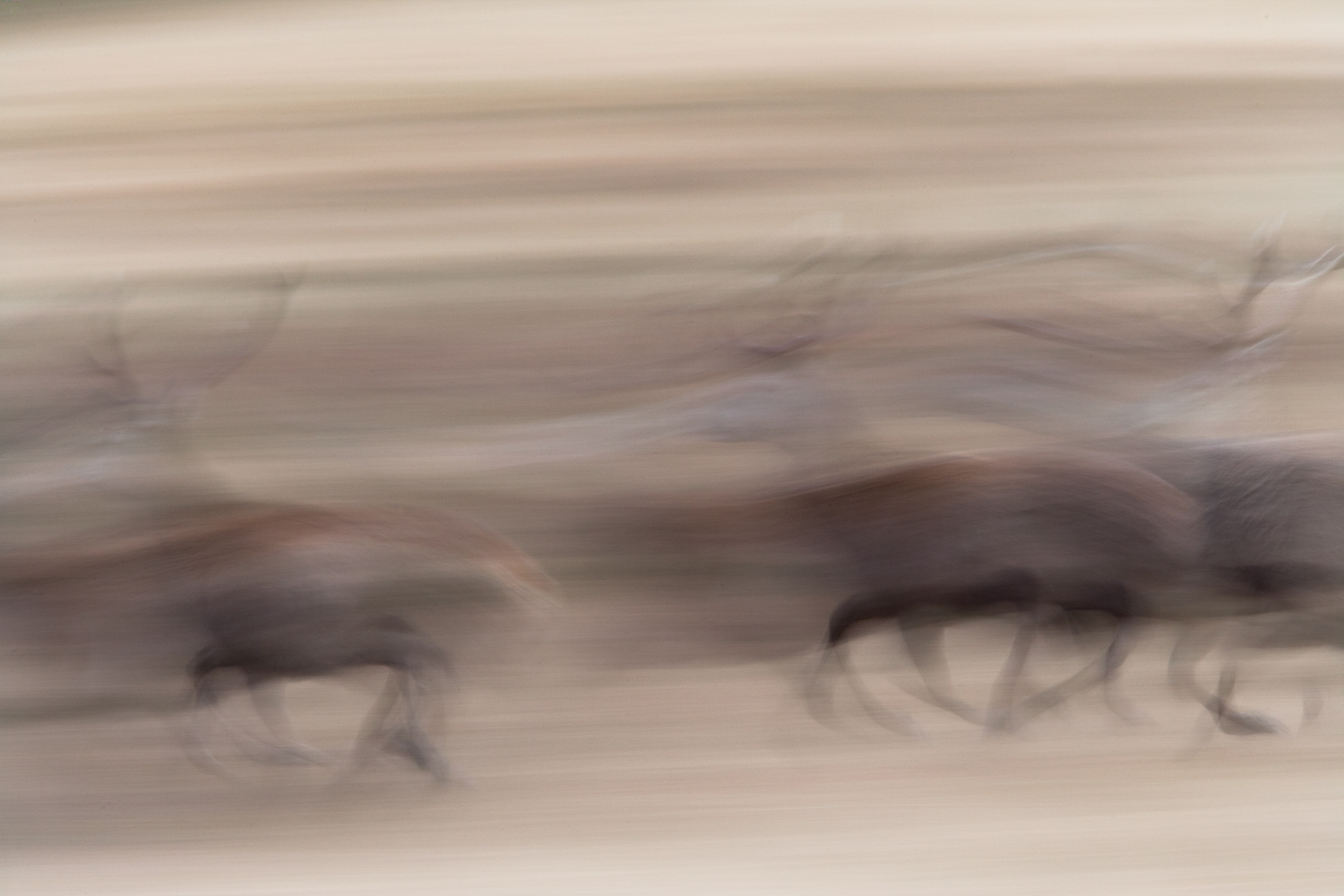 I’ve recounted this anecdote numerous times, and was reminded of it late last night as I watched a short but powerful film on ‘conservation’ featuring Dr Cathy Mayne. In addition to the wilds of Ardnamurchan the film features Glen Nevis, where I spent my childhood, teenage years and into adulthood, wandering on the hill, watching deer and eagles, and also people – an old chap lived in a ‘cave’ nearby for a decade or more then moved into a small tent, becoming an integral part of the ‘wildness’ of this glorious place. Its a landscape I know intimately through winter and summer, I even recognised some of the individual trees that Cathy is walking amongst, and the message she imparts reflects the importance of that human ‘connection’ with place and the stark realities of managing such ‘grand’ landscapes. 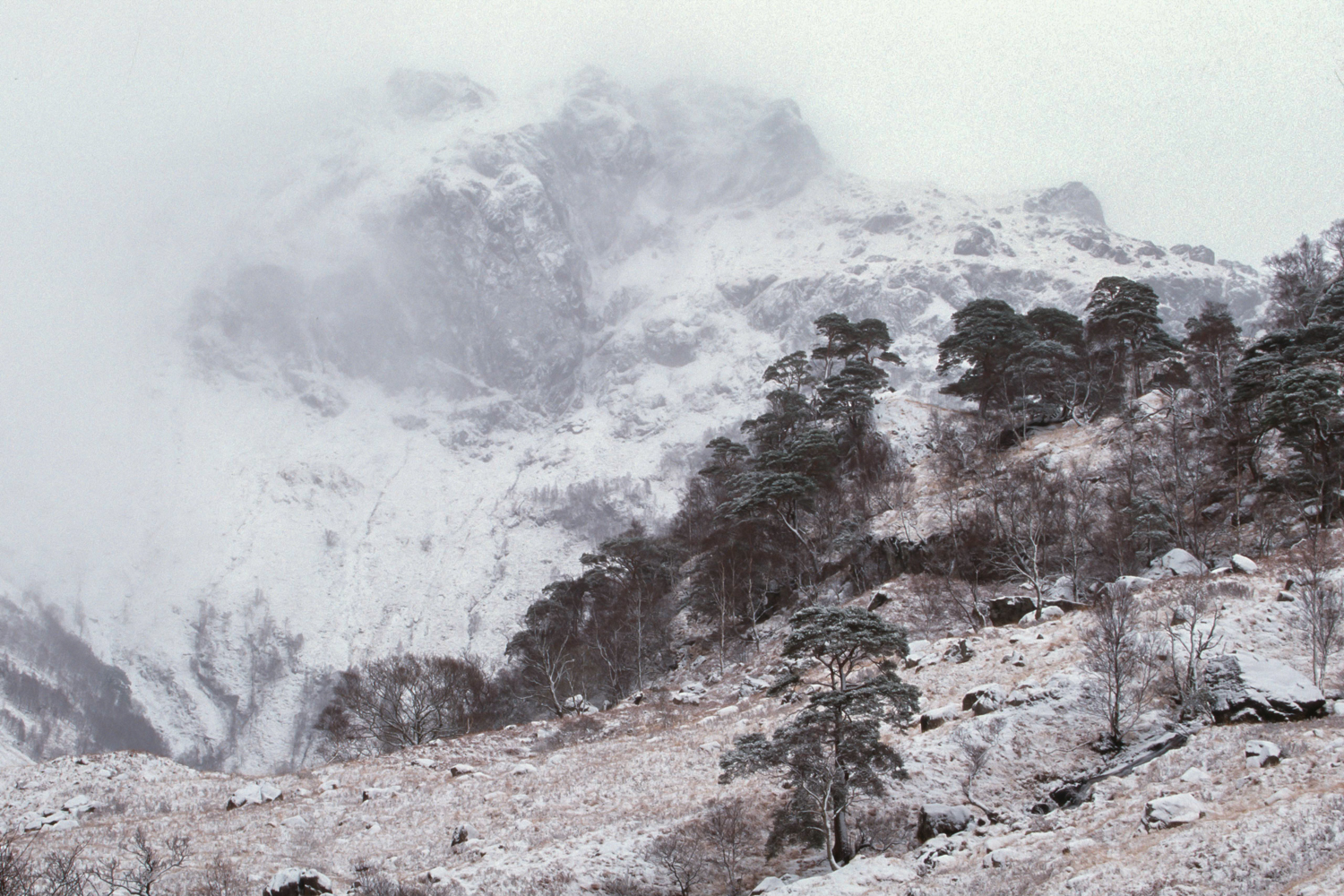 If you want to know what ‘the middle ground’ in this polarized debate looks like – this film will show you. It may also, as happened to Ian, start to shift your perceptions slightly. I’ll leave the last word to Cathy…but in truth its best heard spoken directly by her, her voice rich with passion and concern…

“I hate not doing it cleanly. If I’m going to cull deer I need to do it in such a way that they have a really quick humane death, there’s no suffering, thats really important to me. Its the bit I don’t enjoy because there’s a lot of pressure – I put myself under a lot of pressure to do it well – and inherently I don’t like killing things. But this has to be done and I like the product, I eat meat…I think anybody who eats meat should at least understand how this works even if they’re not willing to do it themselves. I think thats really important.”