As I cleared my mum’s house when she was moved into care suffering from dementia I discovered a small brooch on top of a wardrobe concealed within a dusty cobwebbed envelope. It was easy to establish what it is, a Disruption Brooch, specially created to mark the ‘Disruption’ of the Scottish Church when 474 ministers walked out of the Church of Scotland at the General Assembly on 18th May 1843 and formed the Free Church of Scotland. There’s an excellent overview of this event here. 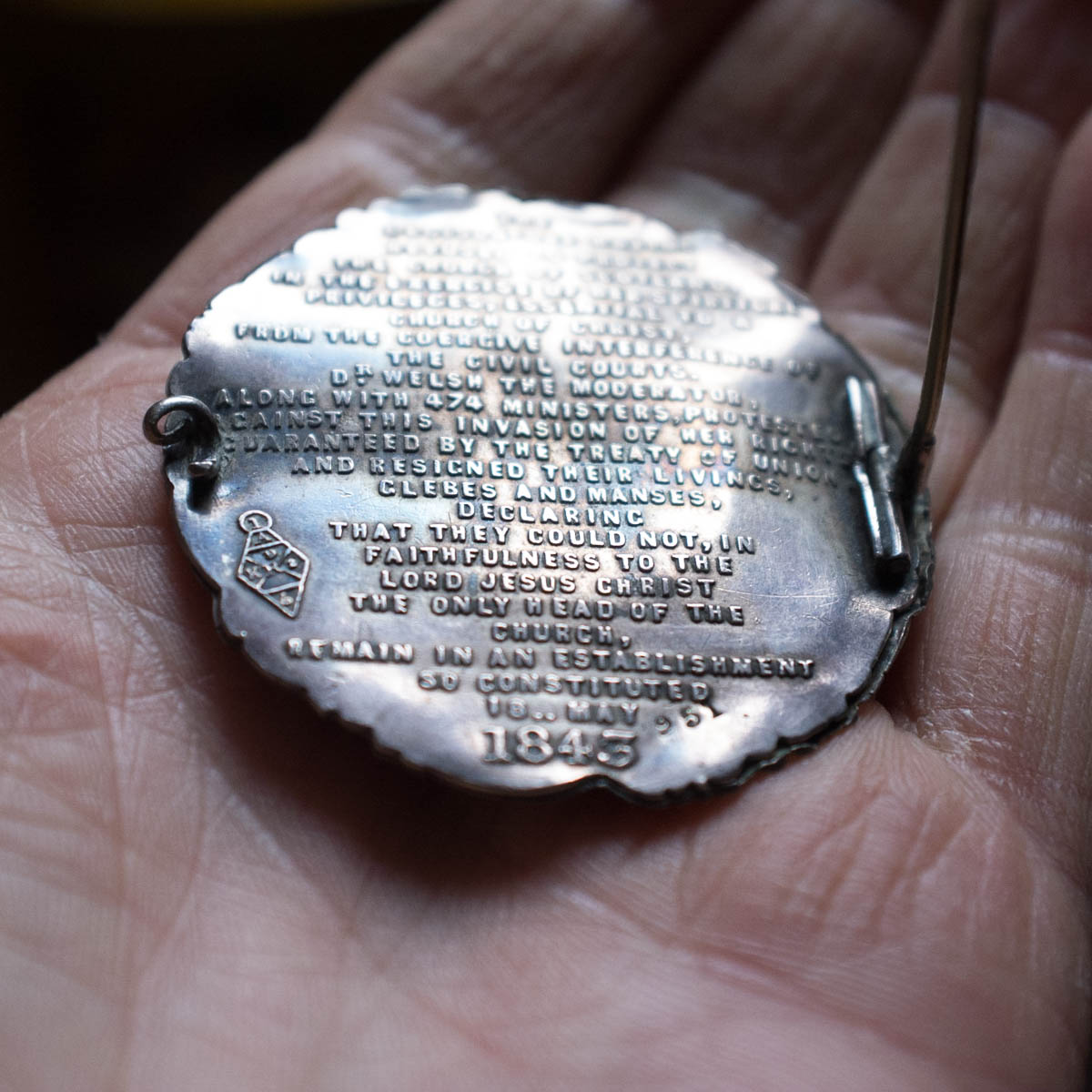 The brooch is inscribed with text on its reverse side:

THE  LEGISLATURE  HAVING  REFUSED TO PROTECT THE CHURCH OF SCOTLAND IN THE EXERCISE OF HER SPIRITUAL PRIVILEGES ESSENTIAL TO A CHURCH OF CHRIST,  FROM THE COERCIVE INTERFERENCE OF THE CIVIL COURTS.  DR WELSH THE MODERATOR,  ALONG WITH 474 MINISTERS PROTECTED AGAINST THIS INVASION OF HER RIGHTS  GUARANTEED BY THE TREATY OF UNION  AND RESIGNED THEIR LIVINGS,  GLEBES AND MANSES,  DECLARING  THAT THEY COULD NOT, IN FAITHFULNESS TO THE  LORD JESUS CHRIST  THE ONLY HEAD OF THE  CHURCH, REMAIN IN AN ESTABLISHMENT SO CONSTITUTED 18. MAY  1843 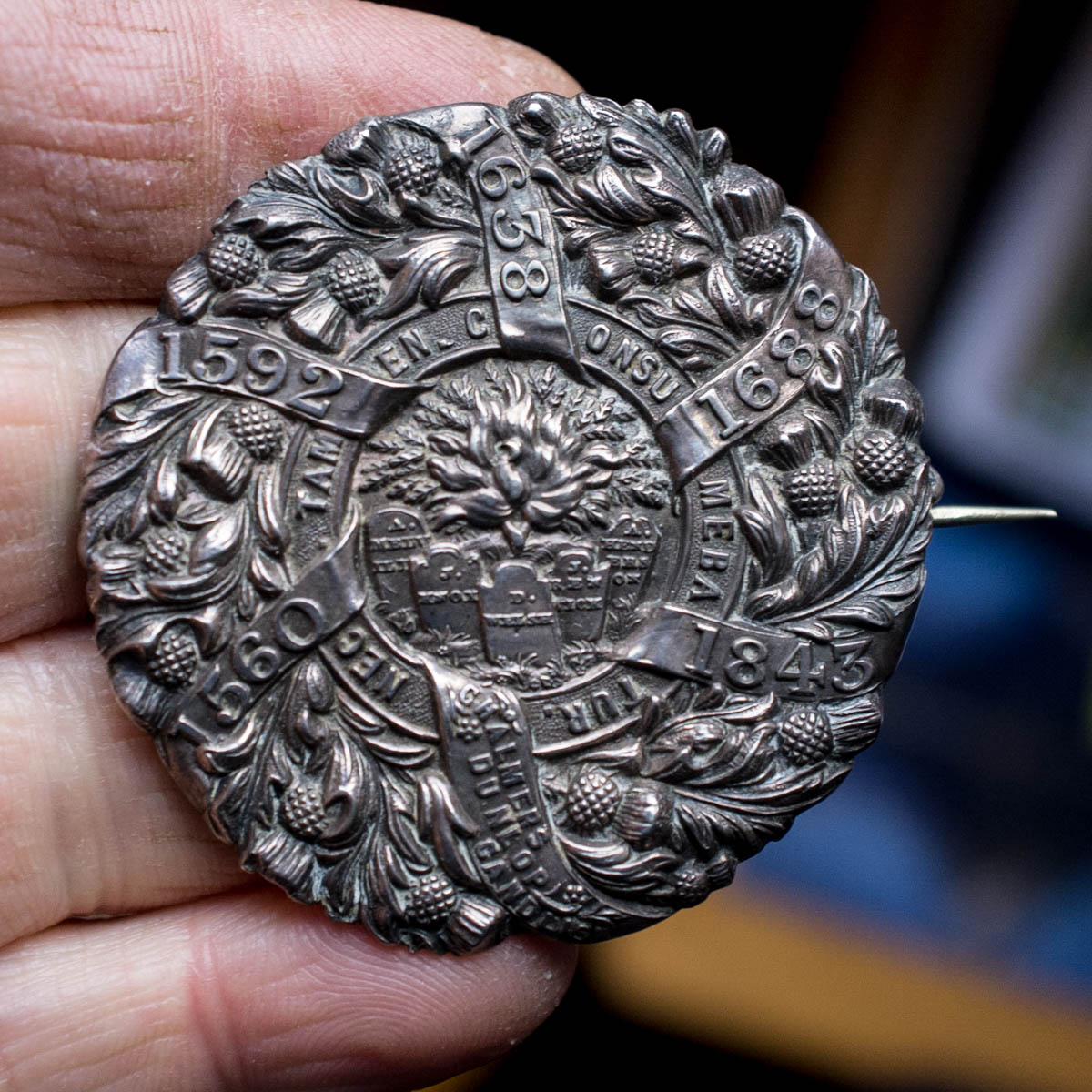 And on its face an intricate design of wreaths, thistles, gravestones and dates commemorate:

1638 Scottish Covenanters rebel against Charles I, signing of National Covenant

1688 End of the Killing Times, ‘Glorious Revolution’ of William and Mary

The brooch I have is numbered 251, and is apparently one of only 500 made. What has not been so easy (thus far) is establishing how it came to be in the family.

One thing that fascinated me about this object is that it was apparently made for women, as it’s the type of thing worn by them on the lapel or with a shawl, but certainly not commonly used for male attire. And in fact there seems not to have been any celebratory male equivalent such as watch chain, cufflinks or tiepin. Given the ‘lesser’ status of women then within the Church (and which is still echoed today in many denominations) this seemed quite a remarkable aspect, which intrigued me.

I made a few comments online and was put in touch with Ann Vanderwal, currently working on a Masters degree in history and archaeology with the University of the Highlands and Islands. Ann has a deep personal knowledge of the Free Presbyterian Church of Scotland having attended as a child and teenager in Toronto, Ontario, Canada and maintaining an ongoing academic interest in its history. 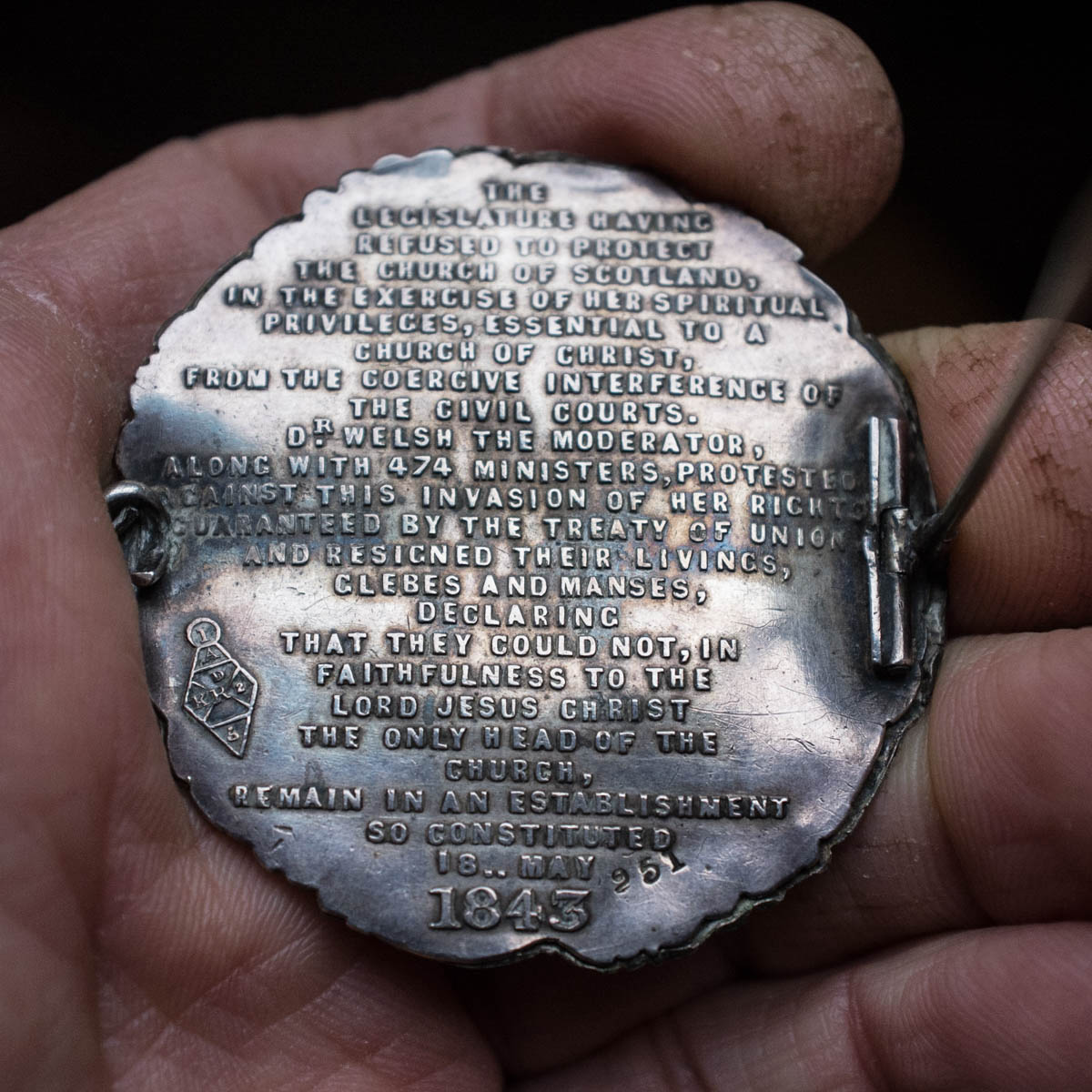 Ann kindly responded and I include her comments here with her permission:

This was made by Middleton Rettie in 1845.  Rettie became an elder for the Church of Scotland in 1831 in the North Parish Church, Aberdeen, but joined the Free Church in the Disruption in 1843.  Rettie then served as an elder, secretary and treasurer for the East Free Church in Aberdeen.  He was also the auditor of the Aberdeen Bible Society.  He had six daughters, one of whom married a minister.

The brooches were made for the wives of ministers who left in the Disruption (474 ministers).  Each badge was numbered and one that sold recently through Bonhams had #115 on it.  I see yours has a #251 stamp.

Since they were made to celebrate the contribution of ministers’ wives to the Disruption (see below), this would explain the lack of matching male jewellery.

While women may not have the role of minister, elder or deacon open to them, that does not mean that they were banished to the back and ignored.  If you take a look at the Disruption painting by David Octavius Hill (here) you can see, at least by my count, 33 women.  Reflecting on the day portrayed in the painting, Alexander Beith (Free Church moderator in 1858) wrote,

“Little if any distinction for the present was made between members of the Assembly and those not so, or between ladies and gentlemen–all were welcomed as having equal rights, because having a common interest, and were indiscriminately gathered together.  With one heart we rejoice to contemplate our wives, our daughters, our sisters, our female friends of every relation interspersed among the black-coated and white neck-clothed brotherhood, sharing in the triumph of the hour.”

More to the point for your pin he also wrote,

“I have often said, that if commemorative monuments be lawful for any object, the wives of the ministers of the Disruption of 1843 deserve one–magnificent and perennial.  The extent to which I honour and respect them I cannot express.”

Another time Beith was being heckled but “a female voice of great power, from the centre of the meeting suddenly addressed me:– “Don’t mind him, sir,” I heard in Gaelic”.  Beith also credits “female adherence..distinguished by such a wonderful amount of effort, effort crowned always with such success.”  This shows that women definitely had a role even if it was not as obvious as the male role.

A more obvious role would be Lady Hamilton who gave £ 30,000 towards minister training.  The Free Church also had an impressive Home Mission board (raised £ 230,363 from 1843-1878) which worked mostly in lowland cities.  One section was the “Bible-women” who had a ministry to the poor, religiously unreached and uneducated.

So there’s not only a huge religious importance attached to this little brooch, but it also pays testament to the very signficant (and probably often overlooked) role women played both in the establishment of the Free Church and in its subsequent service to the community.

But thats not all..!

The link above to the National Gallery revealed another fascinating (and hugely significant photographic) aspect. 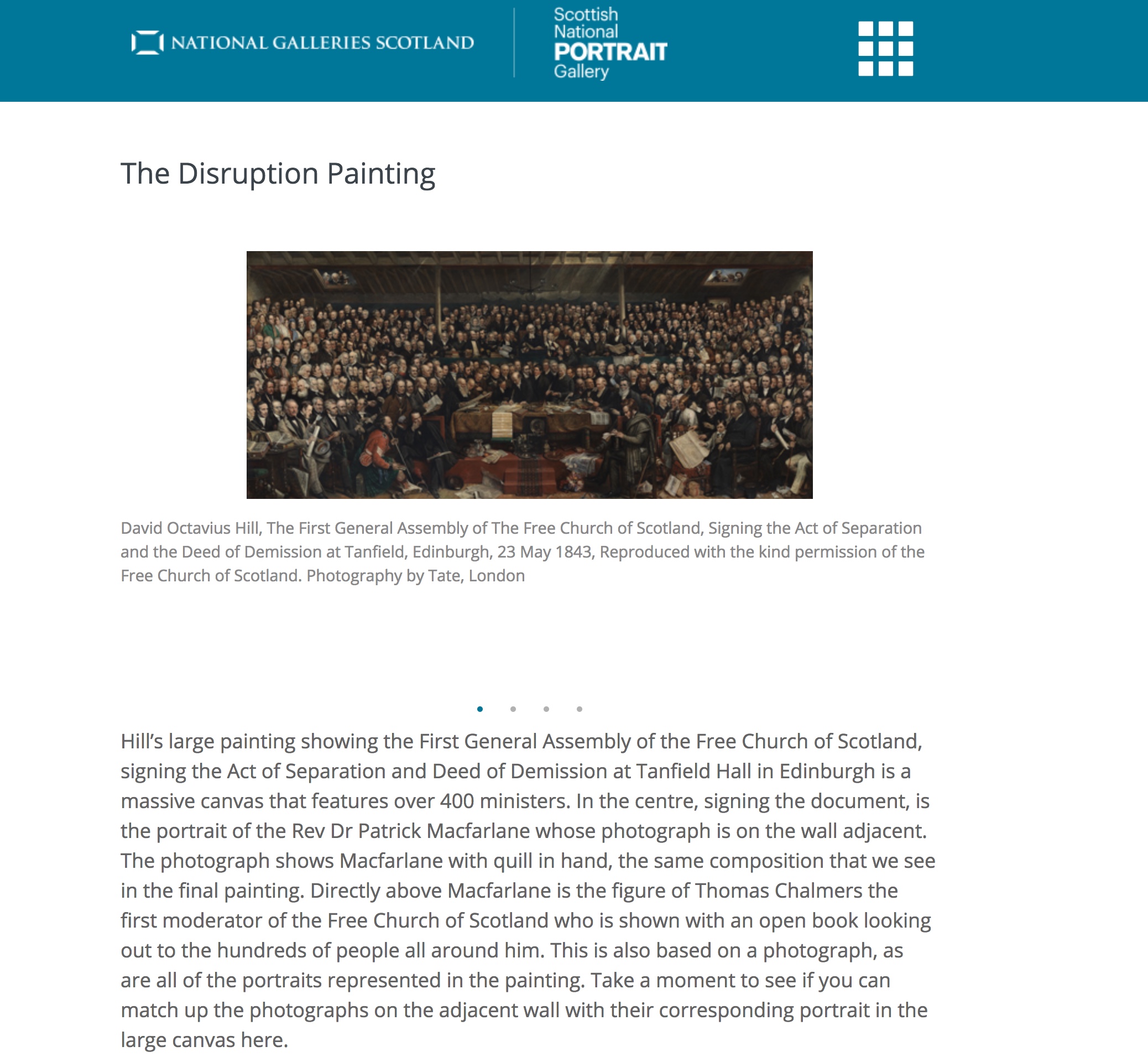 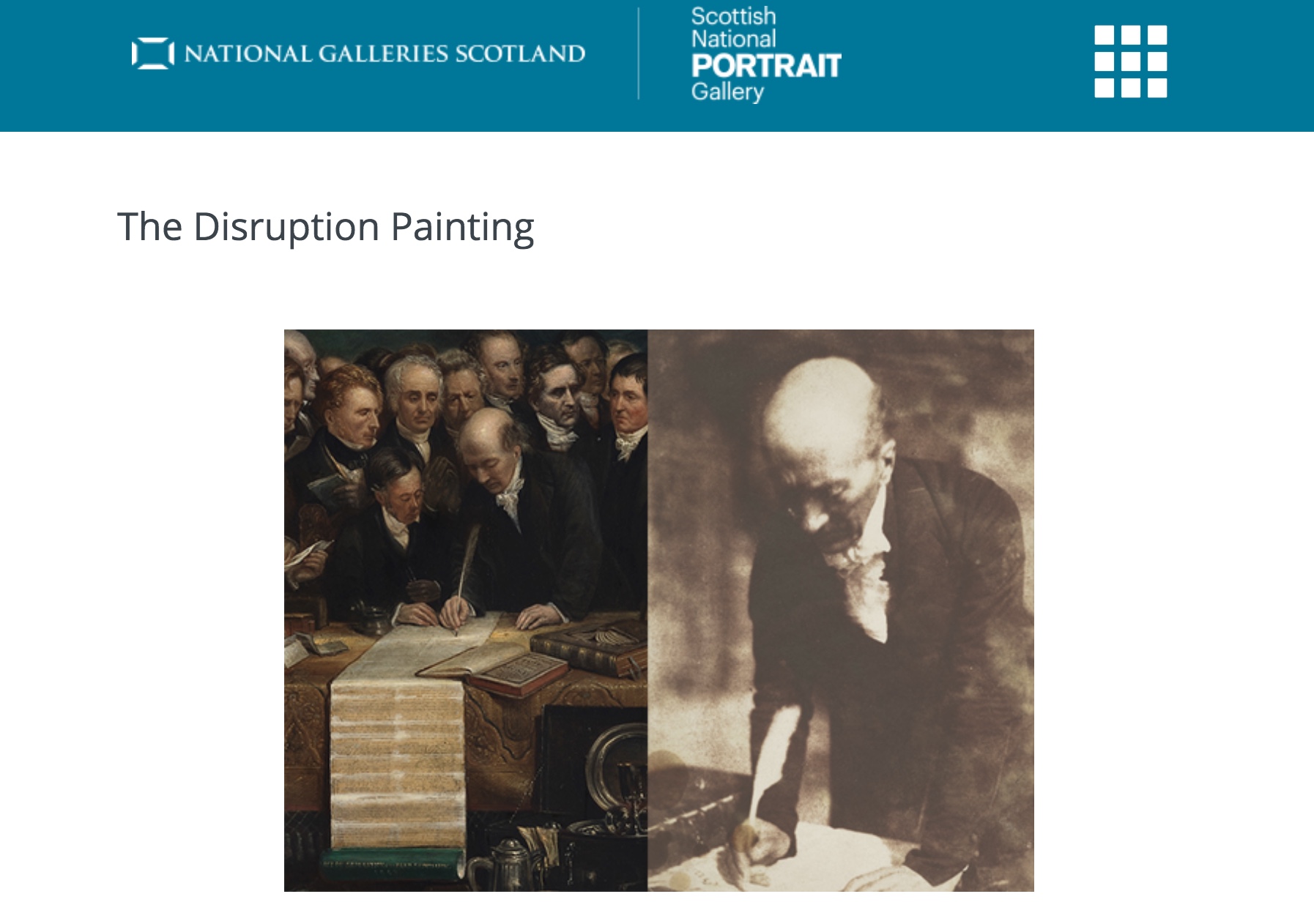 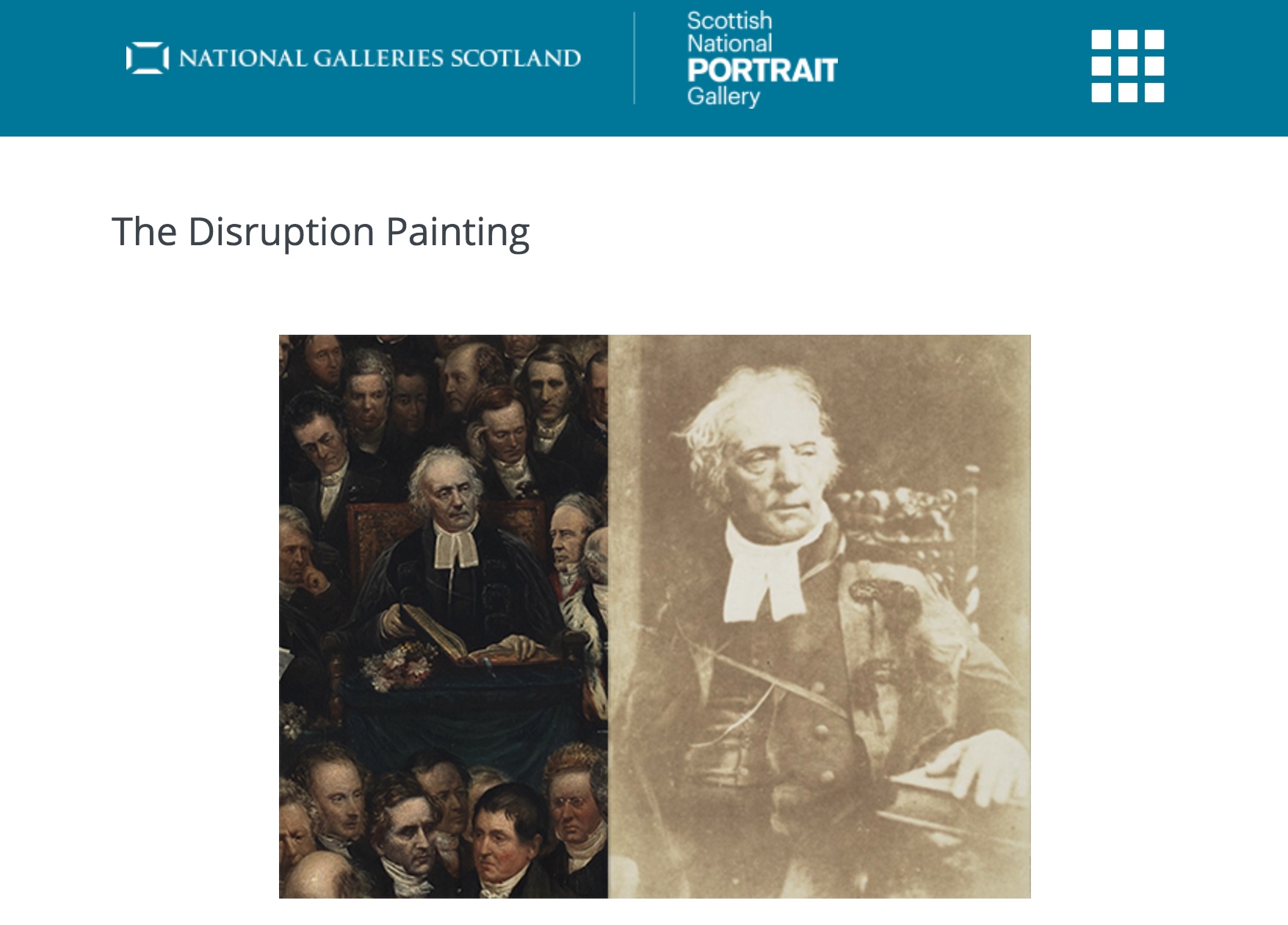 It seems that Hill, an established painter with an interest in newsworthy stories decided to record the event, but realised he had insufficient time to paint all 400 ministers present and turned to his friend, the physicist David Brewster, for assistance. Brewster suggested the help of chemist Robert Adamson who at that time was experimenting with photography. Adamson made his images of the event and subsequently the painting was created from those photographs as is obvious in the comparisons above.

Thus the partnership between Hill & Adamson was born and they created Scotland’s first photographic studio. Hill actually finished the Disruption canvas some 23 years after the event portrayed within it, and included himself and Adamson in the painting, which is now held in the National Gallery of Scotland.  Curiously, the process of making the painting seems to have presented Hill with the philosophical conundrum of having contemporary photographic portraits to paint from but a need to portray these characters as they were now, as described in the National Gallery material:

“In the intervening years many of the subjects had died, all of them had aged. For Hill then there was the challenge of trying to remain true to the event but at the same time recognising that many of these ministers looked a little bit different now. What Hill did was go in and age some of the sitters, greying their whiskers or making them appear more bald, creating a disconnect with the actual photographs. We are left with a curious account then of how things were in 1843 and then how people were in 1866, the time that he completed the canvas.” 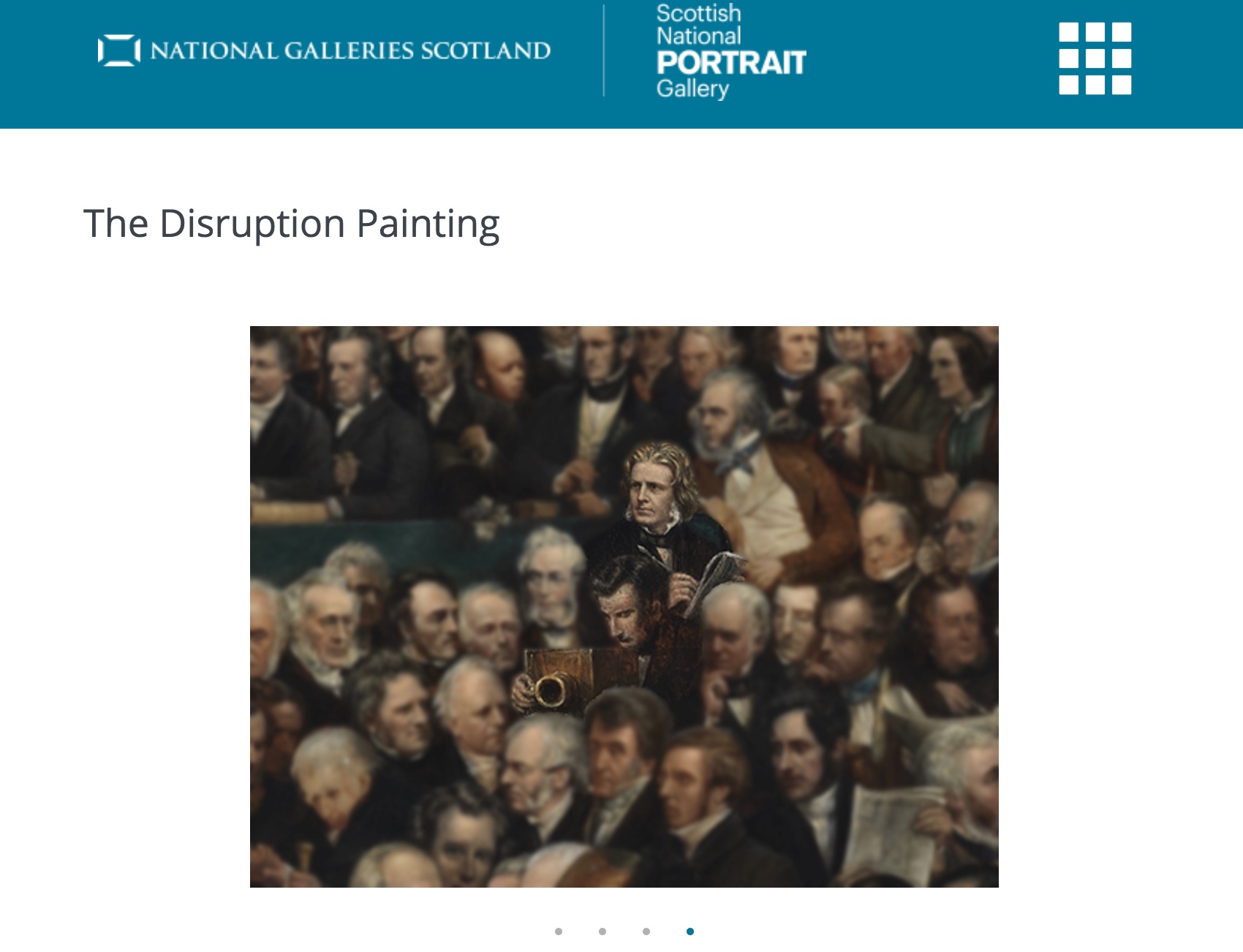 In this ‘new age of imaging’ that we are all a part of, its worth glancing over our shoulder from time to time to better understand where we’ve come from, the technological  journey we’ve made as ‘manipulators of the visual’, whether as painters or photographers. Truth is, as this little wander through religious schism and technological disruption demonstrates, its not ever really been about what the tech is, but what it does, and how it may allow us to portray ourselves to the world.

I’d even be so bold as to suggest that the image above, of Adamson behind his camera in the throng, can be considered a ‘selfie’ of sorts, and portrays also manipulation by clever ‘airbrushing’ of the appearance of others as is so common today on Instagram via various filters! This glorious fusion of Hill’s artistic ability and Adamson’s scientific acumen went on to create a body of astonishing work reflecting 19th century Scotland in incredible detail, amounting to thousands of images now held in the Scottish National Portrait Gallery.

My discovery of a little brooch in a dusty envelope celebrating the ‘Disruption’ has revealed a hitherto unknown (to me) connection to a hugely signficiant celebration of the role of women in what is arguably a major historical event, the effect of which still reverberates through Scotland to this day. It revealed also the involvement of two Scottish photographic pioneers who, in ‘disrupting’ artistic representation by their use of new technology, shaped and influenced our understanding of the period through their art/photography and created the foundations of modern photographic portraiture.