Our skin in the slave trade. Uncle Sir John Moore and I.

I have some family skin in the should we take down historical statues debate.  It’s quite a story.

Last year I came across a version of my family tree on my cousin’s Facebook page.  If the tree is to be believed then General Sir John Moore is my great, great, great, great-uncle. I was fascinated by this because he’s a hero for facing down Napoleon during the Spanish war.

He’s buried in Corunna, Northern Spain, where he took a fatal wound from a cannonball in 1809.  And he’s memorialized in Glasgow’s George Square, where you’ll find a statue of him erected in 1819.  It’s the oldest statue housed on the square. And of course, you’ll find a Wetherspoons of the same name nearby. 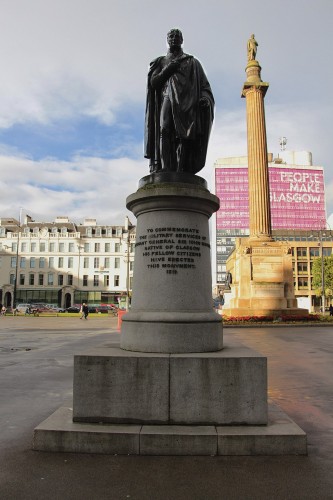 Earlier in his career (1796) Sir John Moore fought and retook the Caribbean Island of St Lucia and was made governor.

On her website History Home  Dr. Marjie Bloy describes how  ‘Moore was left in command of the island, where he was engaged … in warring with the negro brigands, who swarmed in the woods. He re-established order and security.’

What she omits is the slaves of St Lucia were freed by the French governor Gaspard Goyrand when he abolished slavery on the Island in 1795.  The ‘negro brigands’ that Sir john Moore defeated were former slaves once again fighting for their freedom.  My uncle, on behalf of the British government and in support of some of the Caribbean’s most notorious plantation owners, put them back into slavery.

I didn’t work this out for myself. It was pointed out to me on twitter by the photographer Sandra Harper who is a descendent of Caribbean freedom fighters.

Whilst my family was putting the chains back on black people, hers were fighting for them to be free.  I’m grateful to Sandra for doing the work my family didn’t.

Written on the statue is the inscription ‘TO COMMEMORATE THE MILITARY SERVICES OF GENERAL SIR JOHN MOORE NATIVE OF GLASGOW HIS FELLOW CITIZENS HAVE ERECTED THIS MONUMENT IN 1819‘.

A nation benefiting from the murder and suffering of others will not look itself in the mirror and admit to what everyone else can see.  And so one form of racism is buried beneath another when history is rewritten to erase the evil and celebrate all our other magnificent achievements. This form of sweet forgetting is very effective at maintaining structurally racist nations.

My Mum and Dad bought me up to believe that black people were invited to the UK  to do the jobs that white people didn’t want. Implicit was the idea of charity. That we are better than them. Superior, if you like.

‘The continent (Africa) may be a blot, but it is not a blot upon our conscience. The problem is not that we were once in charge, but that we are not in charge any more‘. Boris Johnson, 2002

At my primary school, the few brown kids were openly called p***’s. We told racist jokes about them in the playground. I remember being present when a tiny lad with big spirit, Harjit, was kicked repeatedly against the window of a branch of Wilkinsons on my local Nottingham high Street. I didn’t say or do anything.

I remember Dean. The one black kid in my junior school who was openly labeled ‘trouble’ by the teachers long before he’d caused anything remotely resembling trouble. We were told to stay away from him. I cannot imagine how lonely and cruel a space that the school must have been for Dean.

I remember when Diane Jordan was announced on TV as the first black Blue Peter presenter. I was in the games room of the brutal private school I attended (on an assisted place).  Oh they’ve hired a n*****, someone brazenly shouted. I was thirteen at the time. Some laughed. I stayed quiet. Genuinely shocked.

I learned at that school (Trent College), that there can sometimes be a gap between the brochure, where they bragged about producing well-rounded future leaders, and the reality.

The reality was an all-school assembly where we were told by the headteacher that our school was going to be in the papers and if a reporter approached us we were to say nothing. What he didn’t mention is that my chemistry teacher had been raping children on barge trips. Or that other pedophiles had been given references and sent off to abuse more boys elsewhere. He didn’t say sorry. And he didn’t ask if any of us had been affected to come forward in private to get support. Or what information we might have about teachers still at the school who were grooming pupils.

He just wanted our silence, for which he probably got an OBE.

And so I was in the brochure for winning the school drama prize. But not for being groomed.

There we have it.  The British way. Statues to the best of us. Rub away the brass and you’ll likely expose the horror of our past. It’s not pretty, but it’s necessary.

It’s easy to judge General Sir John Moore. I’m not going to. History tells me it’s more than likely I would have done exactly the same if I was in his position. Although others didn’t (Quakers had long campaigned for the end of the transatlantic slave trade).  I’d rather acknowledge that all around me black British people are carrying the trauma of being expected to be grateful to live in their own country, where every index will tell you they are not equal, that white superiority reigns. Where they continue to be treated (and feel like) foreigners in many public and private spaces.

I can’t stand the thought of Sandra Harper being looked down in George’s square by a rendition of my uncle. And I cannot understand why Bristol council did not remove Colston from his pillar.  These are not great works of art. They are puff pieces to dead people whose true history we neither know nor teach.  They are a generous 3.5 stars and five reviews on TripAdvisor.

As many as four million slaves died being transported in the slave trade.

Tossed overboard into the sea. 18000 of them on Colston’s watch.

If Bristol council has any imagination they will dredge up his statue and make its tossing in the river a yearly event. A Guy Fawkes day for our times. A  reminder that it is not just Colston who needs to come down off his plinth but the culture of denial that kept him there.

Some people who are not afraid to speak truth to power and have informed, challenged and educated me through writings, lectures, podcasts, friendships, social media threads etc and I recommend you follow. There are many, many others.