Tim Hetherington’s last photos and their presentation on the Guardian

Yesterday I received the following email from a photographer and thinker whose work I really admire (not someone who has anything to prove). The subject was ‘Hetherington’s last photos’ as recently published in the Guardian.

This really frustrates me.

The ‘cult of the war photographer’ perfectly illustrated, exactly as raised on your blog post.

The photos are not that good (with the exception of image 8 and maybe 9). Why does the critic write about them as if they are?

Image 10 – shocking exploitation. Use a picture of an anonymous dead body (with no background contextualisation) as a means of enthusing about a photographer.

I started to wonder why is this such a sacrilegious point of view? (it’s worth pointing out the photographer is an admirer of Hetherington’s work. This post is about the presentation of the photos) 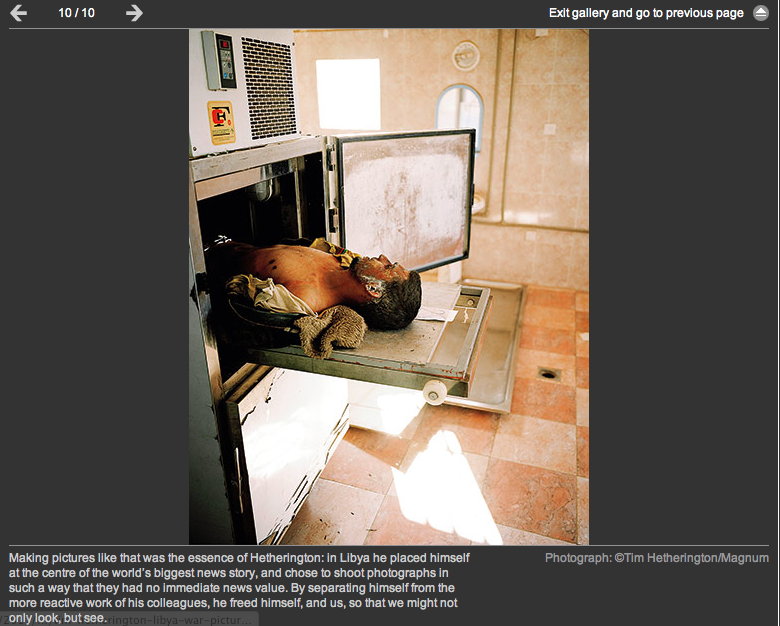 We don’t know this man’s name. We don’t know his story. We don’t know how he lost his life (though chances are his family will have been alerted to this image). He’s merely an extra in a different story; the one about what a great war photographer Hetherington was.

The caption perfectly captures a different kind of conflict at the heart of much modern photojournalism.  This image, it’s claimed, encapsulates the ‘essence of Hetherington’, which enables us to ‘not only look, but see’.  But surely the more we see the hand of the photographer the more the stories of the people in the images become obscured?

It was this picture and caption that really made me think:

‘Hetherington’s comprehension of the condition of war was profound, and in losing him we understand less about war and what motivates young men to wage it. ‘

There’s no doubting Hetherington’s understanding of conflict and all the questions it raises, but do these photos, shorn of any meaningful context, really help us to understand the Libyan war any better? For me its a bit like suggesting that looking at a sequence of pictures of a woman giving birth means that you can somehow ‘understand’ what it is to give birth.

The photo above would, I think, have fallen foul of Hetherington’s own critique of much of the photography that came out of Libya, which he expressed to his friend Michael Kamber shortly before his death

He was upset at how some photographers presented the rag-tag rebels as heroic fighters, when in fact they were sometimes “kind of a joke.” Those pictures, he said, might win prizes, but not his respect. “We have to fight making propaganda,” he said to me one night at dinner. “The media has become such a part of the war machine now that we all have to be conscious of it more than ever before. ”(NYT LENS BLOG)

Infact the photo of the man above could have come straight out of a Hollywood movie. Young, fearless, good looking and toting a big gun. Remind you of anyone else? 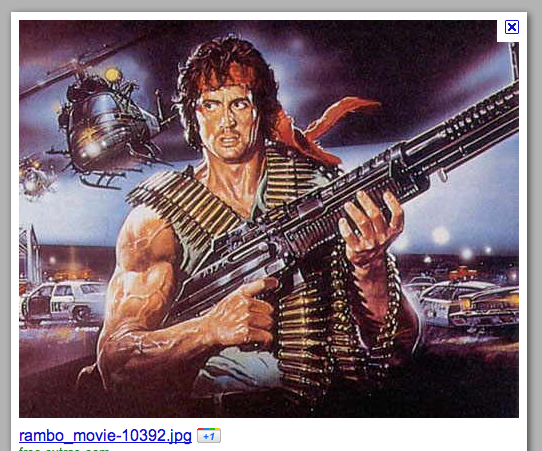 In another interview published on the New York Times Lens blog last year Hetherington was asked by Michael Kamber if he still considered himself to be a photographer?

Hetherington was wrong in stating that photography is no longer a form of mass communication, but I think his comment reflects his own understanding of  what his photography on its own could or couldn’t achieve. He was searching for better ways to tell the stories that he cared about, to challenge new audiences, which is why its so sad that the presentation of his images in this way seems part of a strategy to place Hetherington back into a world he’d seemingly moved on from.

In the film Restrepo, Hetherington, working alongside Sebastian Junger, was able to achieve something that the hundreds of thousands of photos from the Libya conflict were never able to do. Give voice to a group of men. That’s because Hetherington understood that the most profound, the most affecting stories are almost always told by the people that lived and experienced them. Maybe it’s for that very reason that we seem to have reached the point that the war photographer themselves have become an easier story to sell than their photos. And that’s how we’ve ended up with the photo of a dead man in a fridge ‘as a means of enthusing about a photographer.‘

There seems to be a small minority of people in the photography world who feel threatened by criticism of the cult of the war photographer.  But is it not possible to agree that photography published in national newspapers, referencing a recent and ongoing political situation, of which the UK played a significant role, and in which up to 25000 people died, must be open to critical debate, irrespective of whether the photographer is alive or dead?

To say otherwise seems to me to be a claim that Hetherington was not involved in journalism, that nothing he did was open to interpretation and that the value of a photographer should be measured in the number of backslaps they can acquire.

I didn’t know Hetherington, but I’m pretty sure he was better than that.