Smile for the camera please

whilst I cut off your clitoris …

Not funny is it.

So lets start with another story.

A famous Iraqi journalist travels to the USA where he gains access to a pedophile ring and gets pictures of a seven year old boy being abused by a catholic priest.  The boy thought he was going to a party but it turns out the priest has something else in mind. The pictures show the boy in agony and pain.

On returning to Iraq one of the national papers decides to print the photographs for which the journalist is paid. The photos zip around the world on the net. The boy is clearly identifiable in the pictures and no effort is made to conceal his identity. Why bother? These are great photographs and after all its only a white trash American boy.

For their work the photographer is awarded some of the most prestigious photography awards in the land. Afterall it was exclusive access and really it would have taken too much skill to shoot the piece without actually showing the boys face crying out to his mother in pain.

At what point does this story become implausible?

Tell me then,  just what is the  justification for the Washington Post in publishing Andrea Bruce’s photographs of a girl having her clitoris cut off?

Its a question that not enough people are asking as Bruce continues to pick up awards for her series of photographs on the practice of female genital mutilation of young girls in Iraq.

It seems that the only person to speak out about this is The Travel Photographer.

But let me add my voice, this  is a clear infringement of article 12 of the Universal declaration of human rights.

No one shall be subjected to arbitrary interference with his privacy, family, home or correspondence, nor to attacks upon his honour and reputation. Everyone has the right to the protection of the law against such interference or attacks.

We are led to believe that the seven year old girl was not even aware she was about to be cut (she thought she was going to a party) and so cannot in any way have given permission for the picture.

If I had published this photo at the BBC I would be sacked and the BBC fined. The girl would be able to sue under European Human Rights legislation.  I’d like to think that it would never, ever happen.

Would Bruce have taken this shot if this was an American child being mutilated? Maybe; that’s what photographers do, but it certainly would never have been published.

The subject is important. It needs to be covered and Bruce is a seriously talented and thoughtful photographer but I have always believed that journalists devalue their profession when they appear to put themselves in front of the lives of those whose stories they are covering. To do this with a child is a shocking because no apology can ever give that little girl back the indignity of having her face splashed around the world to be pitied at the moment of her abuse.

And that’s where again I think this a further abuse of the girls human rights. This time as they relate to children:

The child shall enjoy special protection, and shall be given opportunities and facilities, by law and by other means, to enable him to develop physically, mentally, morally, spiritually and socially in a healthy and normal manner and in conditions of freedom and dignity. In the enactment of laws for this purpose, the best interests of the child shall be the paramount consideration.

Only someone cynical could argue that the photograph of the girl being mutilated was in her ‘best interest’.

And sadly Andrea, what we both know is that some very  sick people will enjoy that photograph, just as they would a boy being sexually abused.

We need to reflect. 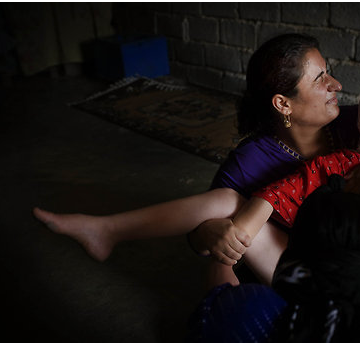