Joseph Rodriguez – Where it’s at (part 1) 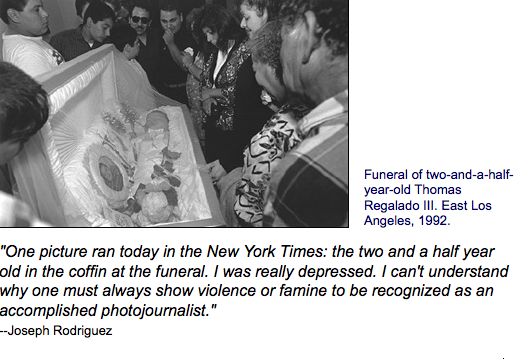 This week we’re kicking off a new series ‘ Where it’s at’. This is where the finest work we sing about on duckrabbit will go. The stuff that kicks our ass. 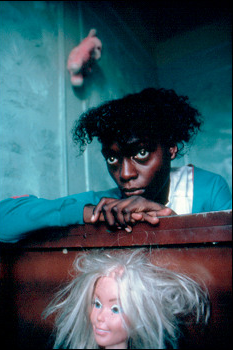 Where better to start then with  Joseph Rodriguez?

Regular readers will know that duckrabbit couldn’t give a toss about the tedious cult of the photographer but kids could do a lot worse then carve Rodriguez’s name into their arm.  Why?

Aren’t you fed up with all those knobheads that think its cool to shoot crack addicts, that think they’re the photographic answer to Jack Kerouac, Bukowski, or some other gin soaked poet heading for an early grave?

At duckrabbit we call it ‘glamorous grime’ and it seems to have an unshakable grip and unfathomable weight in the photographic community.  duckrabbit finds it bewildering.

So many photographers think that they can stride into the shadows and expect to make sense of something at such a shallow level. Infact the more screwed up their subject the better.

I mean do you really think its surprising that there are drug addicts in Afghanistan, the worlds number one producer of heroin? That’s about as revealing as shooting portraits of a chocoholic in a chocolate factory.

Please get a grip.

Some people throw Rodriguez in with all this nonsense because he comes from a ghetto, but he’s completely different. I mean from what I can gather most of the photographers that practice ‘glamorous grime’ come out out of the worst kind of ghetto, the white American one. That’s why the down and out stuff turns them on so much, because it makes them feel like they’re down with the people.

Rodriguez’s roots give him an empathy and an insight into the lives of others. That’s why it was Rodriguez who shot Harlem for the National Geographic back when they were doing stories that went beyond monotone.

He only sees people, not photo opportunities.

He records lives lived and he never measures the lives of those he shoots against a a photographic award, magazine spread or advertising contract.

His eye is never on the future, it is always in conversation with the now.

This week we’ll be looking at his work on the Criminal Justice System in America and anything else we can claw from him.

I know that Pete Brook at Prison Photography will also be writing about Rodriguez, so I’ll give duckrabbit readers a heads up when his more cultured digital ink hits the screen.

Please take the time to read Joseph’s words below and watch one of three photo films produced by Benjamin Jarosch we’ll be featuring on the site.

There have been many studies over the past several decades dealing with the Criminal Justice System in the United States. Most recently the Pew Center on the States released a report, One in 31 the Long Reach of American Corrections, stating

“The sentencing and release laws passed in the 1980s and 1990s put so many more people behind bars that last year the incarcerated population reached 2.3 million and, for the first time, one in 100 adults was in prison or jail.”

The report continues to say that,

“With far less notice, the number of people on probation or parole has skyrocketed to more than 5 million, up from 1.6 million just 25 years ago. Combined with those in prison and jail, a stunning 1 in every 31 adults, or 3.2 percent, is under some form of correctional control.”

What are the indirect but often overlooked impact of these statistics?

My work provides countless opportunities for discussion, dialogue, and exploration related to the lives of those people directly and indirectly impacted by the incarceration and subsequent release of prisoners – namely, the children, the spouses, and the community.

Through working with Walden House I have learned the ripple effect of incarceration is profound, but rarely discussed. The family paradigm is shifting.

What expectations does a wife have of her husband who has been away from home and society for over 10 years?  Why is he unable to sit at the dinner table like he used to?  Why has he forgotten how to talk to his children?  How long will it take for him to find work?  When, if ever, will the community embrace him as one of their own again?

How families adapt (or fail to adapt) to the absence and return of an incarcerated parent, spouse, son, or daughter goes largely unnoticed by the criminal justice system and is left to an over-burdened social services sector. With fewer resources available, the report said, “prison costs are blowing a hole in state budgets.” As a result many states are beginning to look at alternatives to the old way of dealing with incarceration, especially with its nonviolent drug offenders.

As a photojournalist I felt compelled to humanize these statistics.

At Walden House, a local drug and alcohol treatment center operating for 38 years in the state of California, I took it upon myself to photograph and interview residents, many of who have been repeat offenders. Its program has evolved into a national leader in developing strategies to help addicts recover and maintain their lives. Today it helps treat more than 3,400 men, women, and children daily.

I’m part of a project that’s teaching photography to poor black and Latino teenagers. We’ve shown them Rodriguez’s website for a couple different reasons. First, we simply want them to see some great photography. Second, we want them to know that it’s done by people from their community and that it often reflects lives similar to theirs.

I’ve had the pleasure of meeting Joseph a few times and a more decent, committed, straight talking gentleman one could not hope to meet. He photographs people because he genuinely gives a shit about their situation and wants you to do so too. An inspiration, and not just to photographers.

This reminds me of a very simple and very powerful photography exhibit I saw back in the late 70’s. Small snapshot, B&W portraits of “Bowery bums” telling their stories typed on index cards of how they got to skid row. Some of the most incredibly, heart wrenching stories ever told- even if only half of them were true…

As for the the US prison industrial complex, along with “the war on drugs-” an outright collusion of policies.

“As a photojournalist I felt compelled to humanize these statistics.”