Where it’s at – Maisie Crow

‘Where it’s at‘ is where duckrabbit profiles the work that inspires us.  Last week we were privileged enough to feature the work of Joseph Rodriguez (we’ll be putting up some more of his multimedia features later on this week). Today the focus is on Maisie Crow. 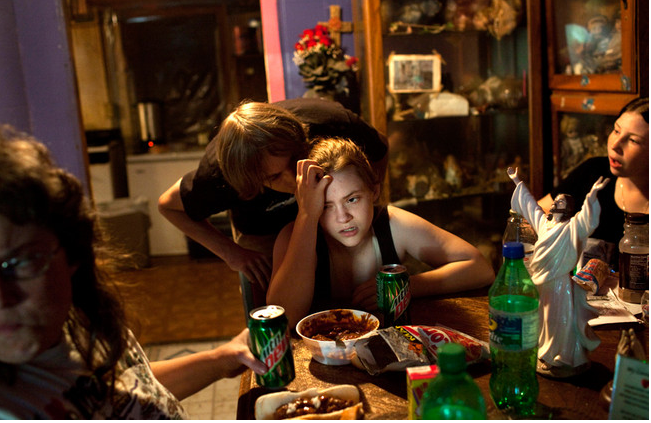 Tonight Maisie will be officially receiving the Ian Parry scholarship at the Getty gallery in London, where they’ll also be an exhibition of her stunning work.

‘Ian Parry was a photojournalist who died whilst on assignment for The Sunday Times during the Romanian revolution in 1989. He was just 24 years old. The scholarship was set up by his friends and family in order to build something positive from such a tragic death.’

Maisie is a young American photographer who has just completed her Masters from Ohio University.

Regular duckrabbit readers will know that we have already championed Maisie’s multimedia work in our monthly column on RESOLVE.

What’s really great is that for once the judges have recognized someone working close to home, not skimming their lens across alien cultures. There’s a depth and honesty to Maisie’s work that few photographers aspire to, let alone reach.  Whilst the trend is to find your voice as a photographer by developing ever more alienating styles, Maisie understands that it’s all about the people whose pictures she’s taking, it’s all about their stories.

Tell me duckrabbit readers since when has telling someone story straight and true and honest, not been enough?

As a photographer that puts her alongside the likes of Finbarr O’Reilly, but as a multimedia producer she has few peers.   duckrabbit hyperbole?  Watch this feature. It tore me apart.

(there seems to be a widespread problem with Vimeo’s feeds at the moment, but until they sort it you can still click on the players to be taken to the videos)

If you were taken over by that piece, here is a more recent short film by Maisie which featured on the fabulous SOUL OF ATHENS website.

You can read an interesting and at times biting debate about the merits of this feature on  A PHOTO EDITOR.

A Life Alone from Soul of Athens on Vimeo.

For 63 years, Tom Rose and his wife, Mary, built a life together on his family farm on Canaanville Road. Then last year Mary passed away, leaving Tom to face the future alone, surrounded by a lifetime of memories.

Crow manages to seamlessly stitch stills and video into masterfully compelling “hybrids.” Short, insightful and visually dynamic- and always with the ring of truth…

Masie Crow is my new hero. Now, this is really something to aspire to.

Ciara, Maisie is my new hero too!

This is the way of the future, hats off to Maisie!