(amended title because Joerg’s was MUCH better)

Take a look at this picture by Damon Winter, as featured on the (excellent) New York Times, Lens Blog, and part of a series featured in the newspaper: 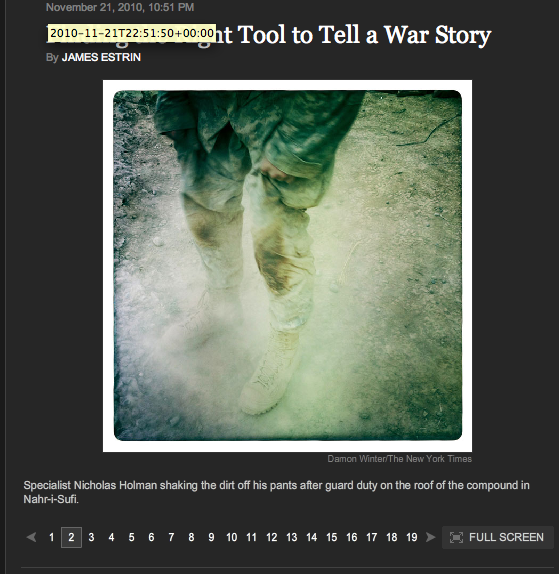 The photographs have been taken using an iPhone that automatically applies heavy processing with an iPhone app. On James Estrin’s (LENS Editor) Facebook page Nina Berman had this to say:

In his introduction to the photos James makes the point,

‘Does it really matter what camera Damon Winter used to make these beautifully composed images? I don’t think so. It’s the images that are important.’

Not that the photos aren’t ‘beautifully composed’, nor that there isn’t a skill in taking them. However to me the camera and the processing applied to the images is fundamental to how we respond to them. That’s why so many people are buying these Apps because as one website comment about the Hipstamatic iPhone App puts it:

I *love* the photos that come out of this app, it makes just about anything look amazing.

Even, it seems, the Afghan war.

Once again we are talking about how ‘beautiful’ the photos are, or what a great device the iPhone is, but not about the war in Afghanistan (although many people do comment that the photos bring them close to the lives of the soldiers). Would we really be talking about these pictures if they hadn’t been processed by an app on the iPhone?

Realistically we can only be debating the use of an iPhone because we are so detached from the reality on the ground for the many suffering Afghanis, despite the photography (or lack of it beyond American and British soldiers). Journalistically that must be viewed as a failure. It’s also a failure of democracy, the very thing we are trying to import into Afghanistan, because there is so little debate about the billions of dollars of taxpayers money that have been used to wage a war that we are only just starting to admit we can never win.

Not to mention the well documented torture and murder of Afghan citizens in detention by American soldiers.

In the meantime a lot of people have got very rich, some people have better lives, many have died and the photo community are rushing out to buy iPhone apps. Fair enough, I saw the pictures and want one too.

Maybe the New York Times can do an experiment, to help us understand how post processing affects the way we are manipulated by an image and wether these photos mean, as Nina Berman points out, that the ‘doors have been blown open.’ After all if an editorial standard is to be dumped there should be some kind of rational explanation.

Present the same images both with and without the additional processing (the camera’s standard JPEG)  and measure the response.

It seems to me that if you take editorial integrity seriously, as some kind of objective process (not that I believe in such a myth), this would be a simple way of gaugeing just how much our response is being manipulated by the skill of the photographer or the skill of the computer and where that line should lie?

(Please note I have no problems with manipulation, staging or otherwise, just as long as you don’t try and hide it from me)

Tom White who writes the EXCELLENT Photography Lot already posted on this story and wrote the following comment:

I worry about this – as I said to my students when they brought it up; it sends out mixed messages. The AP guidelines on retouching (in a typically vague manner) state that anything above basic colour correction and toning should be labeled clearly as a photo illustration. I think these fall into that category. On the other hand, is using the hipstamatic app really so different than choosing to shoot with a holga or load your camera with high speed black and white film because of the effect it gives? At what point are these things unethical? When do they become culturally acceptable as standard journalistic practice? I do know that if I took raw files from my SLR and hipstamaticised them in photoshop I would be in trouble. Wouldn’t I?

The problem is that photography is both a science and an art and as such contains an inherent contradiction in the form of the objective/subjective process. With photo manipulation and retouching, there is a huge grey area between definitely acceptable and horrifically unethical. This debate has been going on since the invention of the medium and will no doubt continue without ever getting properly resolved. I could pull up examples of manipulation that have been held up as unethical while at the same time find similar (and more extreme) examples that no one seems to have batted an eyelid at.

My personal view is that when you are presenting work in a documentary and journalistic context and viewers are looking at the style and the process to the detriment of the content then you have failed. I actually do find some of these photos have a great intimacy to them that in cultural terms is enhanced by the use of the iphone app and may perhaps bring the daily lives of the soldiers into the barhopping world of the iphone wielding hipster, stopping them for a second to make them think about the war. However, ultimately I doubt it. Especially as I imagine the more common response is ‘wow, cool app’.

I wish I had a penny for every time I heard someone who I am photographing ask me if I was going to ‘make them look good in photoshop’. This to me is the really worrying thing. If people assume that photos are manipulated then how can they trust what they are seeing? For a journalist, where trust and believability are essential aspects of the work, this is a problem.

In any case, while he’s over there, perhaps Damon could use his iphone to get the same intimate view from the afghan side….