Its all in the edit (delete at your peril)

I’ve been teaching photography in various ways for over 20 years, and embraced the digital revolution for all the reasons we all have, but also because of the ways it enabled me to show a novice photographer a technique in ‘real time’ and see the result on the lcd screen. Learning is quicker and more fun this way. But one thing that I’ve tried to encourage people not to do when learning, and which digital makes easy to do, is delete in the field.

I’ve tried to encourage a process of editing in the computer, and looking at the work as a whole, and seeing how the images that you might like have been arrived at, by studying the progression of images as you shot ‘through’ the subject over a period of time.

Yes just like the contact sheets we used to make in the good old film days (and some people still do). 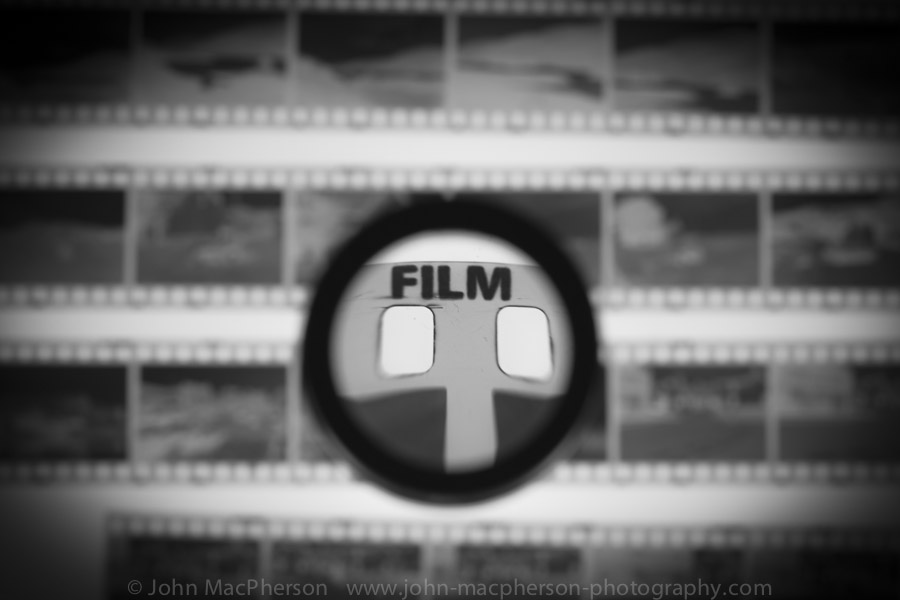 I think there’s a lot to be learned from doing this, not just technical lessons, but aesthetic too. But I’ve come to realize that there’s another aspect to this thats really important. Its that for many inexperienced photographers it’s actually quite difficult to determine what actually constitutes a ‘good’ or ‘successful’ image and that too often its the technical qualities that are the defining ones, overriding any other less tangible considerations.

I was teaching photography for a community association adult group over a recent winter, all beginners, mostly using basic digital compacts. Simple class structure – an ‘assignment’ to undertake in the intervening week, and a group review of the class images from the tasks for the first hour of each successive session.

“Whoa!” says I. And she stopped and backed up as I requested, through numerous images, until we came to a few pictures I’d spotted as she’d flicked through.  One was simply beautiful (although the original was in colour, but with a horrible colour cast). 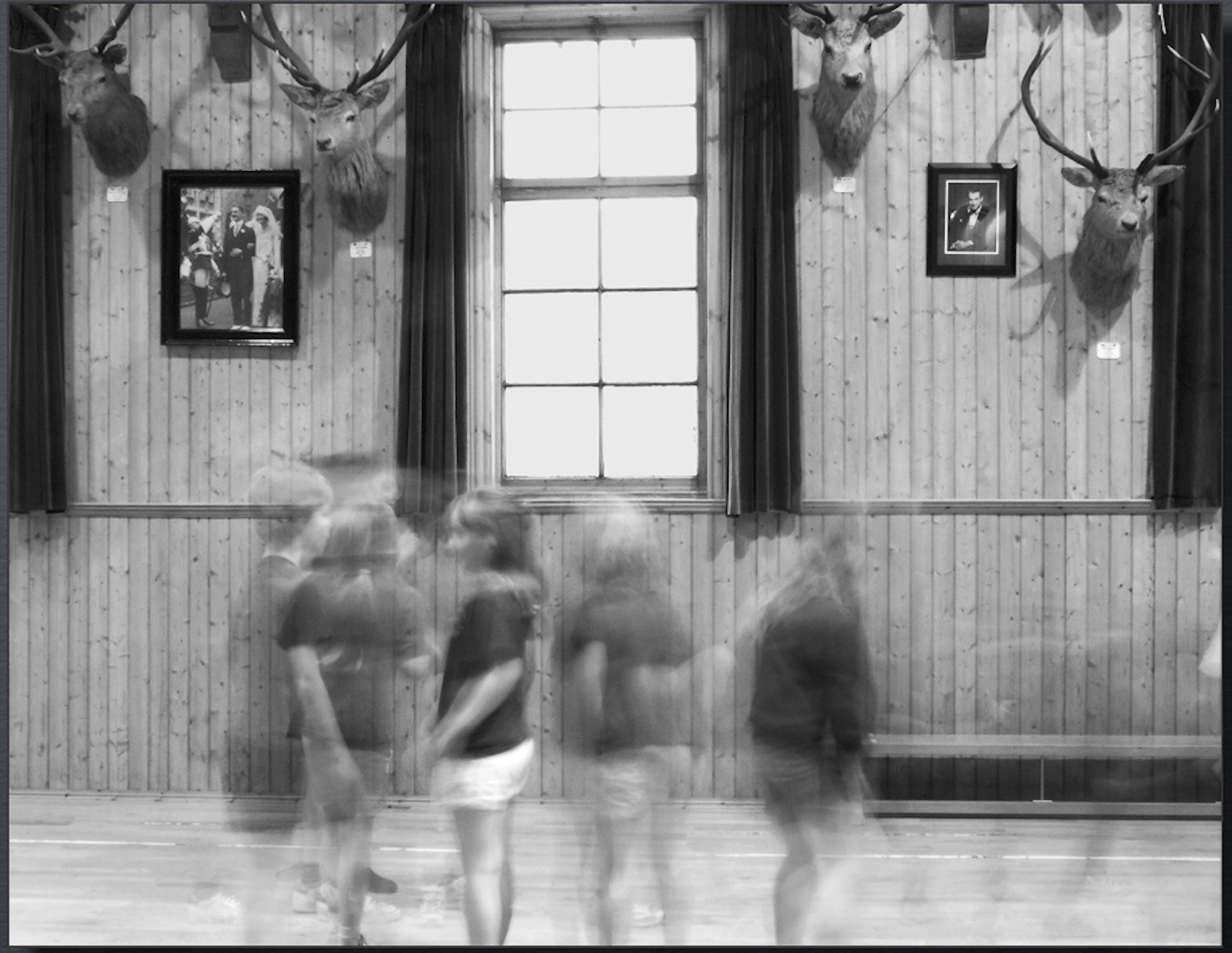 I asked what she thought of it. “Not sharp, didn’t work“, she replied. And again said “I meant to delete these“. I asked the class what they thought and the same comment was made by several of them about the image not being sharp..

And so I told them what I thought. That this was a wonderfully evocative image of a highland village hall, the timber lining, the tall windows, and the pictures on the wall of the local laird (estate owner) and his wife at their wedding, the stag heads, all of it just shouting ‘village hall’ and giving it a real sense of place, but with that wee bit of additional magic –  the children. Moving around as they played during the long exposure, they had recorded as a slightly ethereal presence, wispy and transparent, almost ghostlike. And I explained how for me this evoked the presence of past children, and future children, and because they were virtually unidentifiable they were ‘any child’, and that this was a timeless image which should be celebrated and enjoyed and certainly not deleted.

The class were well up for the discussion that followed and enjoyed having their preconceptions about what constituted ‘good’ work challenged.  And many of them found the concept of ’emotional content’ a revelation, and the realization that it is a quality totally independent of the technical aspects of an image, to be a very liberating thing.

We all have to start the learning curve of photography somewhere, and it’s been a continuing source of delight to me that with some guidance (and even without) the vast majority of people have something to say ‘visually’, and can often take a really really good image to illustrate it. Truth is that taking ‘good’ images is very easy, but the difficulty is that they are invariably surrounded by a mass of work of lesser value.   How does one discern the good from bad? If you’re a novice photographer how can you tell the difference? I often wonder how many real gems never see the the light of day because they are simply deleted?

In one subsequent class an even more emotive moment occurred. The class task was to photograph something you like or something you dislike. One woman class member showed an image of a leg, clearly badly smashed up and surrounded by a metal cage, obviously in a hospital context with a nurse’s hand visible at the bottom of the frame holding the leg. She explained this was an image she hated because it was her partner’s leg, taken after they’d decided to move 500 miles to Scotland and she’d relocated and got a job whilst her partner worked out his notice in the south. However he’d had a serious accident and was now in hospital down south for at least 6 months, until his leg healed. And this meant the new life they’d planned together was on hold because of the accident, he was down there, she was up here, hundreds of miles away “and this photo – well I hate it, I just hate it because of what it signifies, the separation and his absence” she said with an emotional crack to her voice.

After a moment I asked the class what they thought, and there was a subdued range of nods of agreement, and sympathetic murmurs. This image and its meaning had obviously struck them all as being a little ‘heavier’ and more emotional than they’d expected. So I asked a question:

“What attitude do you think that nurse’s hand displays?“.

Silence. So I asked again for everyone to look at the hand and tell me what it looked like. Still silence.  I gave some guidance, and suggested that what they had responded to so emotionally was the verbal description of the image’s meaning to the author, NOT to the image’s actual content.  And then asked them did they think it looked like a caring hand or an aggressive hand in the photo. After a few moment one of the bolder folks (bearing in mind this is only week 2 of our course) said “er….um….well…..caring I think“.  I pressed on “why caring?“.  And then several of them started to look, to see, and to think, and answers flowed, such as “it’s hard to say, it’s just well the way it looks” and  “it’s the way it’s touching the leg, sort of delicately” and so on.

I added “yes, we all recognize aggressive actions, stances, bodily shapes, and equally we recognize passive, caring, tender attitudes and actions, whether we are aware of this or not. For me this hand sums up ‘care’, and ‘tenderness’ and ‘healing’, and I’d suggest that rather than hate this image you should perhaps love this image because what it demonstrates is that in your absence someone else is looking after the person you love with a great degree of care, and dare I say it, tenderness. And at the beginning of your description you described how well looked after your partner was, that the staff were really caring”.

There was a silence then a little tearful sniff, and “Oh my, you’re right, I’d not realized. I didn’t see. Yes, the staff are so caring….Oh my…I’d , I’m…..I’m…I see now. Phew. Ohhh!” . The hugely absorbing discussion that followed took us in a wide arc through a range of topics, about emotional content, visual literacy, cognitive dissonance and much more and left the class somewhat drained, but much much wiser; and acutely aware that images can be ‘read’ and interpreted in widely differing ways.

Every image has a story. Telling that story, about how you felt that day, why you pointed the camera in a particular direction, what it felt like for you then and what it feels like for you now, all help to articulate the worth of your work, and can make you think carefully about the content.

But what others will see in your images might sometimes surprise you.

You can learn a lot by sharing.

Wondering whether or not to press that delete button?  Might be better to wait.