Presenting poverty is difficult, as is presenting suffering in general. To expose someone to the lens, and then to the wider world, in a moment of struggle or pain or fear, must be justified by some purpose, some greater act of goodness. Otherwise it is simply a kind of voyeurism – a static piece of rubber-necking. I think this is a well-recognised problem that all photojournalist with any claim to integrity must struggle with – so I don’t expect to break any ground by bringing it up right here. No, this piece is simply to offer a neat little example – a coincidental chain of images – which made me think about the problems of showing poverty and which also throws up some other knotty little issues that turn out to be pretty big fat major issues that run within the practise and concept of documentary photography. 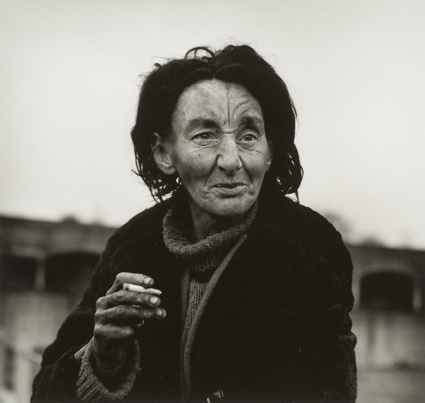 Last week I went to see Don McCullin’s retrospective at Tate Britain. It’s a muted and interesting display occupying only one room (I’m told the McCullin exhibit at the Imperial War Museum is more impressive). I found myself struggling with McCullin’s images of homeless people and remarked to my friends that I believed these portraits had to be viewed with some nod towards historical context. By this I meant that I suspected these portraits were something more remarkable at the time of their production (60s – 80s) than in 2012. To be clear, I mean the fact of their existence was more remarkable, rather than the aesthetic of the image. The aesthetic is still incredible: eyes stare or defer, skin is rendered in smoky greys, coats and shadows are as heavy and black as charcoal on a canvas. But treating the dispossessed with a painter’s reverence must’ve been a bigger statement then than it might be now. I’m not saying it’s right that social issues should be reduced to fighting out whether or not their image has become cliché – but I am saying that it does, sadly, happen.  The fact that a pressing social issue can become ‘cliché’ is a disturbing problem and one which artists interested in social change must inevitably grapple with and seek out new strategies against. 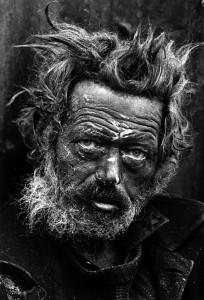 I think the cliché is probably born of three sets of circumstance: that of the socially concerned photographer, that of the homeless person, and the bitter fact that homelessness is a problem that is ongoing and needs ever renewed address. The photographer’s desire to deal with the issues of poverty in his/her vicinity coupled with the accessibility of people who have nowhere else to go and who therefore continually offer their image, seems to make it quite likely that ‘the homeless’ will become a subject for the concerned photographer. Throw in the draw of some loose change being handed over in return for a snap and the potential for the image to be made is even greater. It is the economic imbalance, the fact that one person has private space and can protect his/her visibility and that the other has very limited access to private space and protection of his/her visibility, that worries me and makes me think that deeper problems might sometimes underlie the small social event of photographer photographing homeless person.

The other thing that made me uncomfortable was that these photos made feel useless. I did not understand why I was being asked to consume them as objects on a gallery wall. Were these art objects or a campaign? Both? Or maybe, evidence of a past campaign that now takes on the form of art? Or perhaps, evidence of McCullin himself, of his actions within the world, of his type of photography? The narrative these pictures propose are troubling to me – am I learning about McCullin (who afterall, is the subject of the exhibition), am I learning about these homeless people (who may be long dead, or totally altered from the image on the wall), am I learning about homelessness in general?  In any case, what can I hope to achieve as witness to their suffering? Suffering which is at least thirty years out of date. It’s a funny bind because the fact that these images figure a past makes me think that this suffering is ancient and unchangeable. This encourages one to turn the images into an art object, a piece of imagery. But that suffering is still there, however old, and to dislocate the art of the image from the suffering of the person shown seems usurious and inhumane.  Indeed it comes down to this: Am I witnessing a social problem or am I consuming an image? And how reconcilable are these two cases?

All these questions and feelings resurfaced again a few days later when I saw this spread in The Guardian’s Weekend Magazine (of the 21st of January): 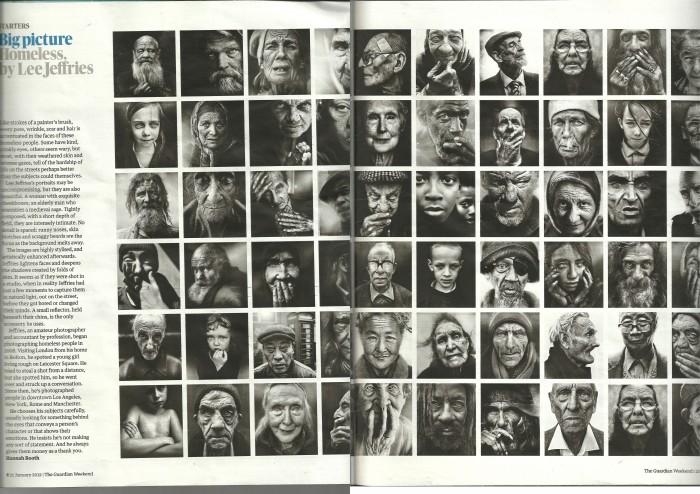 A number of things struck me – first of all the attractiveness of the grid layout and the density of portraits across the two pages. I find this layout intriguing, it makes me want to study each image and draw comparisons between them.  The highly detailed and dense quality of each image is interesting as well, if a bit over-glossed – creases, eyelashes and scratches are all rendered with a metallic precision.  Then, I noticed that there were no captions, no stories for any or each of these faces. At first this intrigued me even more – I began to ask questions of the faces, I began to worry about their histories, I began to notice the difference between them. But then I also began to wonder where the stories were and whether it was fair to present these faces, especially in such an aesthetically pleasing way, if the complex issues that lay behind each person’s predicament were excluded.

On one hand, I welcomed this as a new strategy: it got me interested; it got me asking myself questions. On the other hand that line of questioning ended in me wondering what the purpose or intended effect of putting these images in a weekend magazine without their stories was. There is a hint of idealisation about it, of romantic storytelling: “…they are also beautiful. A woman with exquisite cheekbones; an elderly man who resembles a medieval sage…”. I find too much romanticism unhelpful to social causes.  Once we enter a romantic narrative we also broach the reasons and feelings that motivate us to continue writing the narrative.  It was this sentence especially that I found most excluding and difficult: “…their weathered skin and intense gazes tell of the hardship of life on the streets perhaps better than the subjects could themselves.”. The face becomes a visual object to tell a tale, rather than the first presentation of a whole and complex human being with a whole and complex story. I think these faces do tell us a lot, but is it enough for a project that seeks to develop an intimacy with homeless people and to break down the everyday barriers that allow us to walk on by, to then reduce that story only to the face? I might be closer to the face of another than I have been before, but I’m also being asked to take that image, and that person, at ‘face-value’ and this erects a new kind of barrier.

In fact, on LightBox, some of my worries and questions were answered. The explanation of Jeffries’ practice and the fact that he has used his work to raise funds for the homeless helps to make the status of these images a bit more clear. Also, the photographs on LightBox have captions – only location and date – but it makes a big difference to the meaning of the image. It makes this person locatable and historical thereby giving them a context which illustrates their situation in social terms. Jeffries says: “I’m stepping into their world. Everyone else walks by like the homeless are invisible. I’m stepping through the fear, in the hope that people will realize these people are just like me and you.” Of course, art cannot always be measured by what the artist claims it to be, however this does reaffirm my initial feeling towards the images – that they attempt a kind of intimacy that subverts the non-homeless person’s average interaction with the homeless person.

Well, this goes to show how much an editorial can construct, construe and influence meaning.

This post was originally published on my own blog here.