Are you close enough to see the truth?

Rant warning. The following contains mild anger, a fragment of barely concealed contempt, and a modicum of frustration. It’s not going to tell you anything new, but might serve as a reminder of some important things it’s easy to forget.

I’ve looked at a few images online recently which have made me feel very uncomfortable. Virtually always taken by men, these photos are of the homeless, the destitute and the ‘unusual’. One photographer talked about photographing a seriously distressed individual in the street, and the individual screamed for him to stop and not do it, and the photog boasted about his response – which was to step closer and take another shot. This individual’s attitude was “if it’s on the street, it’s fair game”.  Fair game! Bah.

I’ve had a long-standing interest in marginalised people, such as those who have ‘hidden’ disabilities which may manifest in ‘strange’ ways, ways not necessarily understood by the casual observer. So it angered me to listen to a fellow photographer describe a very distressed person as ‘fair game’. Language no different from that used by hunters, with no consideration being given to the way the photographer’s actions actually made the ‘subject’ feel, nor with any hint of concern for what might be the cause of the unusual behaviour that had attracted his attention in the first place. All that mattered was his getting the image.

Some years back my elderly dad suffered a serious stroke on a foreign holiday, which was misdiagnosed by the local doctor who prescribed rest and an aspirin, but my mum was very concerned and managed to get enough cash together to pay for an immediate flight back to London with him. With dad staggering and by now incoherent, and both of them still wearing ‘summer holiday’ clothes, she wrestled him through the airport and to a train. Arriving in freezing central London dad fell down between the train and platform and was jammed up to his chest. She described being unable to remove him, pleading with people to help, businessmen, smart folks in suits, elegant women in warm coats, all of whom sneered their thinly disguised contempt at her, and one of whom murmured “drunks”. Tear-stained and distraught she was finally aided by a couple of ‘thuggy young lads’ (as mum described them) who tenderly extricated dad and reassuringly assisted both to a taxi, and on to hospital. Things are often not what they seem on the surface. Smart suits don’t make you smart. Thugs are not always thuggish. Staggering people are not necessarily drunk. Life is complicated; and sometimes ‘the truth’ is an elusive quality.

So how do you get to the truth? By engaging with people. Sometimes it’s appropriate to simply take your image of the scene and depart. There’s no ambiguity, no hidden meaning. It just is what it is. But there are other times when things may not be what they seem. Situations where interaction reveals a better understanding, and some truth emerges, and if you’re lucky, the gift of a story is bestowed upon you.

A fact underlined beautifully by an experience described recently by duckrabbit.

And my own experience, one of many, whilst working on a project recording Scottish islands and the people who live there. I went into a small crafts shop to buy a souvenir. Sat by itself in the middle of nowhere, I’d passed the place numerous times but never stopped. It was a quiet day, hens wandered about, and inside the small ‘shed’ I encountered two women. So I politely asked if I might photograph them at work. Within ten minutes, I had been gently quizzed by the older woman and had teased out of me details of my project and wider work, my family history and much more. Then I was drinking tea, and as the afternoon wore on I found out mum was Sam and her daughter was Mickey. But then the story was revealed. Mickey is blind, and has epilepsy, and as she lives in a very rural area with few facilities she was offered some day care, much needed respite for both mum and daughter, in the day care facility for the elderly several miles away. But as Sam explained, her seizures “had frightened the elderly people” and Mickey was asked not to attend any more. So to provide a useful alternative and some valuable social interaction for Mickey, Sam built the shed, virtually by herself, to allow space for her daughter to work and run their small joint crafts enterprise.

I left with more than just the souvenirs I purchased, with an insight into epilepsy, prejudice and a mother’s devotion. 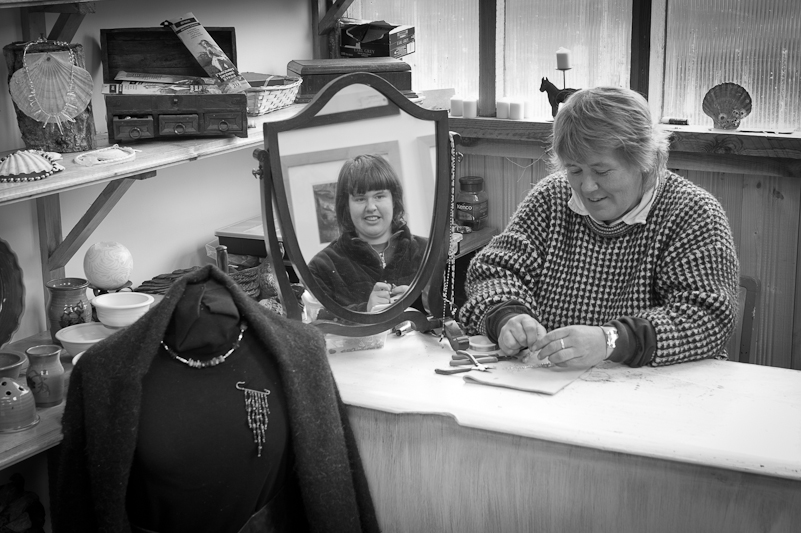 And more recently I’ve been astonished by the images and words that Jim Mortram is presenting as he explores the lives of his fellow citizens in his ongoing documentary ‘Market Town’. The images themselves are a shock to the system – direct, gritty and powerful, and some of the finest portraits I’ve seen anywhere. There’s a depth and honesty to them that’s compelling, and a look in the subject’s eyes that I think reflects the intentions of the photographer. And that look is trust. Trust born from the fact that Jim’s not just invading people’s lives, but also sharing in return a great deal of his own experience. And then there’s the words. Not Jim’s words, but his subjects. Simply related, no nonsense narrative. It’s a powerful combination.

I make no apologies for mentioning Jim’s work again on duckrabbit. It’s important work and needs shouting out about. For various reasons. But for me, one main and very personal reason.

Despite working professionally as a photographer, I also worked concurrently for over twenty years as a Social Worker, part-time in both jobs, by choice (for complex reasons I wont bore you with) with people who have physical and/or learning difficulties, social difficulties and problems such as epilepsy. The same people that Jim photographs. I’ve seen the effects careless comments can have on marginalised people, witnessed first hand the callous discrimination they often endure, and could relate to you several tales that would make you cringe, if not weep, at the actions of our fellow citizens. And I’ve barely restrained myself from punching people on a few occasions when they were unaware their comments were being overheard by someone who COULD respond; but instead I chose to articulate my contempt for them using their weapon of choice, language. It hurts far more and the ‘pain’ lasts far longer.

The voices of the ignorant are too often loud; those of their victims rarely heard.

You, or indeed I, may see a scar-headed individual in the street and if we’re really really perceptive realise this person has epilepsy (the head scarring and broken noses are the big clue that they fall down a lot). But if we’re totally ignorant we’ll see at best a toughie, or at worst a shambling basket case, distressed and somewhere out beyond the edge of our understanding. And consequently we may treat them ‘differently’ and in a less than caring way. But their ‘problems’ are not so much rooted in their illness, but in our ignorance.

Jim’s work seeks to narrow that gap in our understanding. By giving a voice to people who are often denied the opportunity to be heard. He wants you to see for example that people who have conditions such as epilepsy, are not defined by their illness, are not simply ‘epileptics’, but are people just like you and me. They have loves and laughs, and hopes and fears. And friends. They belong to communities and live their lives as richly as the interruptions of their illnesses will allow. 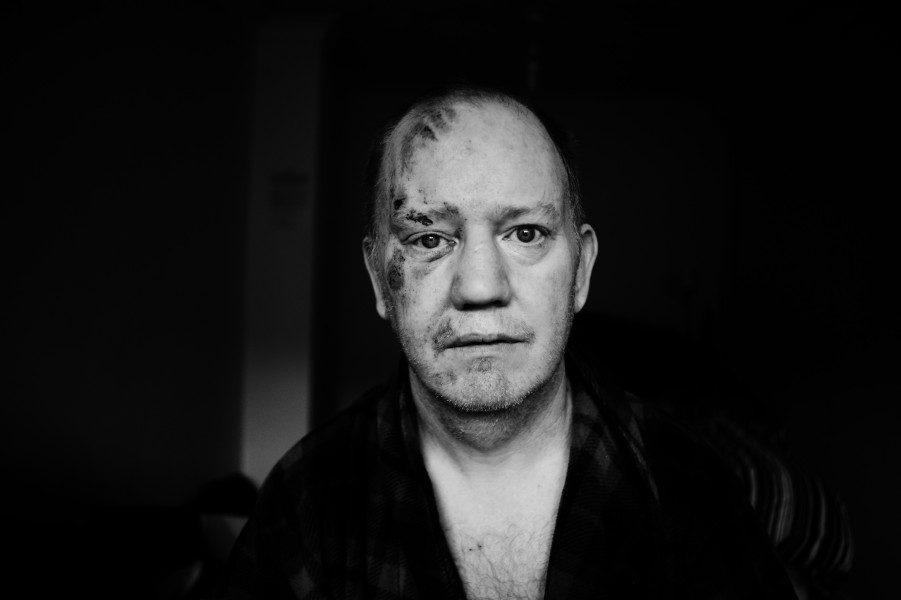 Simon. Not ‘an epileptic’, but a John Wayne fan © Jim Mortram

And by engaging, and I mean really engaging, as Jim is doing with the people who live in his community, sharing the experiences of their respective lives with each other, and relating their words, little gems of knowledge about Jim’s collaborators are revealed, such as Simon Childerhouse.

You might previously have described Simon as ‘an epileptic’, but thanks to Jim you can now see Simon as a John Wayne kind of guy, a movie buff with impeccable taste in leading men. True Grit? Yep pardner – but particularly the bit that says ‘true’.

There’s precious little truth in a lot of the online work I view, but there’s a great deal of it in Jim’s work. And we’re all the richer for that. This is the kind of work that underlines for me why photography is important, and carefully considered and concerned storytelling vital. Simon’s own words should be all we need to read in order to understand:

“…if I have a fit in bed I wet the bed and I’ve got pads on the bed to keep the sheets nice and dry. It’s embarrassing but that’s why I want to share it, to explain so people understand.”

There’s an old saying (from Capa) bandied about a lot in photography “if your pictures aren’t good enough, you’re not close enough”. I used to think that this referred to physical proximity, getting into someone’s face, right up there close. It took a long time and many hard knocks for me to realise I was completely wrong. Jim’s work demonstrates the real meaning of ‘close’. It’s really all about empathy, trust and understanding.

Has this post made a few of you feel just a little uncomfortable? Yes? Good. Because I am uncomfortable too. Jim’s work has made me realise I, as a photographer, can do much more for people like Simon. And I’m going to try. Will you?

“Fair game”?  Sometimes life’s not fair, and for individuals like Simon it’s never a game.