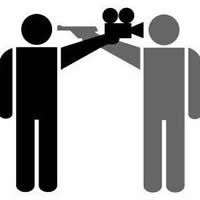 From the Anarchist News

“Photographers were continually confronted throughout the demo. These vultures not only put people at very serious legal risk by shooting their faces, but physically interfered with the march’s movement and the capacity for people, masked or not, to act…………..”

“………………….Such actions taken towards photographers demonstrate our intent to be neither incapacitated by the media, nor represented by an apparatus which we despise. Aggressively confronting photographers is an element shared by most of the major blocs which acted on Mayday, which is indicative of a clear desire to refuse the traditional, liberally-oriented paradigm of pandering to the media. While the bloc in NYC did not reach the level of physical destruction demonstrated in numerous other cities, its aggressive response towards those infiltrators from the media actualized an increase in militancy unprecedented within the context of recent demonstrations in the city. For anyone who is not acting in order to acquire social capital or to grace the cover of the Post, it must be made unequivocally clear: journalists are fucking enemies.”

“………………….To our enemies: if we won’t hesitate to directly confront hundreds of cops and to destroy property, what makes you think we hold the lens of your camera to be sacred? You want to preserve your four thousand dollar camera to watch us break everything else? We are not doing this for you, and this is not a game. You clearly do not understand that there is no exception. We feel nothing but contempt for you cowardly spectators.

the “did you know that a photographer’s camera could pay your rent?” collective”

What future for citizen journalism?  Anyway, the comments and responses made to the above post are worth a look.