(please note when this post was first published it was widely reported that Barakat was seventeen. Reuters did nothing to correct this because presumably they didn’t know Barakat’s age. On December 24th they wrote that infact Barakat was eighteen when he died although its unclear how they’ve managed to establish this. Due to this information we changed the first word in the title of this post from ‘child’ to ‘teen’. Corey Pein has more info here.)

Yesterday Reuters  reported that a photographer working for them, Molhem Barakat, died covering a battle in Aleppo. Barakat had been taking photographs for the prestigious news agency since May. Those photos have appeared in many of the worlds leading newspapers.  What they failed to report was that at the time he was seventeen.  If he had been fighting he would have been classed as a child soldier.

(UPDATE there is  now conflicting reports about Molhem’s age. The best we can say is that he was likely to have been seventeen when he started to shoot for Reuters. Reuters in a statement refuses to answer the question, possibly because they themselves don’t know).

Reuters did report that not only was  Molhem a photographer on their books but also an ‘activist’. According to the reporter Hannah Lucinda Smith, Molhem was an ‘aspiring suicide bomber‘ who tried to join an Al-Qaeda offshoot earlier this year but was turned down for being unsuitable (Molem’s name is changed in her article).

“Al-Qaeda are good!” he told me, with a smile and a double thumbs up. “I hope that they’ll accept me and that one day I can set off a suicide bomb in a regime area.”

The article makes it clear that one of Molhem’s motivations was the pay that he would receive for fighting.

As we passed through the battered streets he told me his reasons. First was the monthly salary of 11,000 Syrian lira. It is a pitiful wage for a potential suicide bomber, but enough to tempt an eighteen-year-old stuck in a war zone with no job, no money and nowhere to study.

(UPDATE: Smith has written to duckrabbit saying  Molhem’s urge to fight was a direct reaction to seeing relatives killed at the hands of the regime, and to living in a city where there were few other options. Given this its of course understandable that he would consider becoming a bomber)

It seems that Molhem was able to find the money he was so desperate for from Reuters instead.

One of Reuters 10 Absolutes of Journalism is to  ‘Always strive for balance and freedom from bias.’ Clearly they have a different definition of the word absolute then I’m used to. No-one should be surprised that journalists are targets when a major news organisation is prepared to hire a child who has expressed a desire to be a suicide bomber.

It’s worrying that other news organistions are not asking Reuters for some kind of public explanation. Many of them have sold advertising off the back of Barakat’s pictures.

I would be grateful if you could provide me with on the record answers or a statement responding to the following questions:

– There have been conflicting reports of Molhem’s age ranging from 17 to 19. Are you able to clarify this?
– If not, how does Reuters respond to some reports that Molhem was 17 years old, and therefore a minor under UK and US law?
– What checks does Reuters carry out to verify the ages of young freelancers working in hostile environments?
– Is Reuters aware of whether Molhem Barakat had completed any hostile environment or first aid training. Was he equipped with personal protective equipment or a first aid kit?
– What it the current policy of Reuters on purchasing material from freelancers in Syria?

I look forward to hearing from you.

We are deeply saddened by the death of Molhem Barakat, who sold photos to Reuters on a freelance basis. To best protect the many journalists on the ground in a dangerous and volatile war zone, we think it is inappropriate to comment any further at this time.)

(UPDATE Corey Pein has written a series of questions he thinks Reuters needs to answer here.)

In a post yesterday Smith mourns the loss of her friend:

I won’t remember Barakat photos but I will remember his beautiful smiling face. Someone should put it up in the newsroom at Reuters: 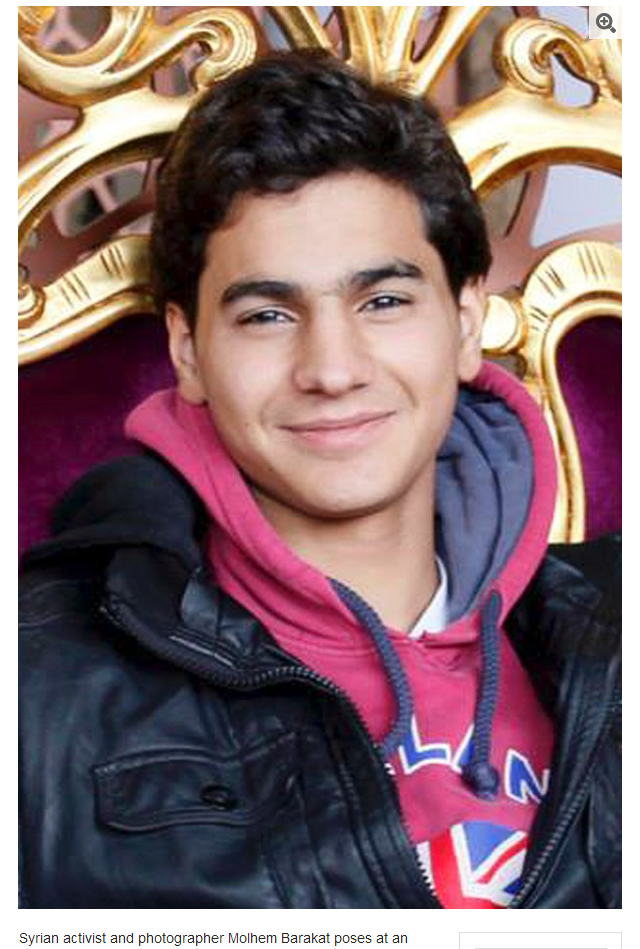