The Guardian is running the following story about AP photographer Narciso Contreras being hung out to dry for photoshopping an image.

The Associated Press has severed ties with a Pulitzer prize-winning freelance photographer who it says violated its ethical standards by altering a photo he took while covering the war in Syria in 2013. Narciso Contreras recently told its editors that he manipulated a digital picture of a Syrian rebel fighter taken last September, using software to remove a colleague’s video camera from the lower left corner of the frame. That led AP to review all of the nearly 500 photos Contreras has filed since he began working for the news service in 2012. No other instances of alteration were uncovered, said Santiago Lyon, the news service’s vice president and director of photography. AP said it had severed its relationship with Contreras and would remove all of his images from its publicly available photo archive. The alteration breached AP’s requirements for truth and accuracy even though it involved a corner of the image with little news importance, Lyon said.

This is the picture 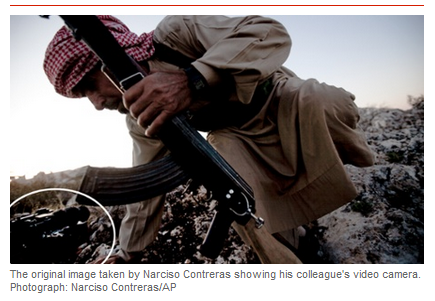 It’s worth noting that it was AP who wrote the story themselves. You can either read this as a press release or an attempt at transparancy by the agency. I’d say its a PR exercise in making sure you get the story out there the way you want it before anyone else does.  Most of all they are protecting the Pulitzer prize they won for photography in Syria to which Contreras was a key contributor. Note how they contacted Pulitzer BEFORE releasing the story (ass covering).

Contreras has this to say

“I took the wrong decision when I removed the camera … I feel ashamed about that,” he said. “You can go through my archives and you can find that this is a single case that happened probably at one very stressed moment, at one very difficult situation, but yeah, it happened to me, so I have to assume the consequences.”

It takes integrity to come forward and admit making a mistake. Investigations show this mistake was singular and took place in one of the most stressful and extreme environments anywhere on earth. The removing of the camera made little difference to how the photo can be read. It’s not a deliberate attempt to deceive the audience into thinking that something else was taking place than can be inferred from the pictures.  It’s a nod to the fact that above all else in photojournalism it’s not truth but aesthetic which  is valued. If this wasn’t the case it wouldn’t even have occurred to Contreras to alter the photo.

What is really laughable is Lyon’s comment that ‘The alteration breached AP’s requirements for truth and accuracy’. I don’t know what kind of truth Lyon is talking about, but I do know, more often than not, the facts the audience need to form a balanced view are outside of the image. The lie is that agencies like AP would have you believe otherwise. 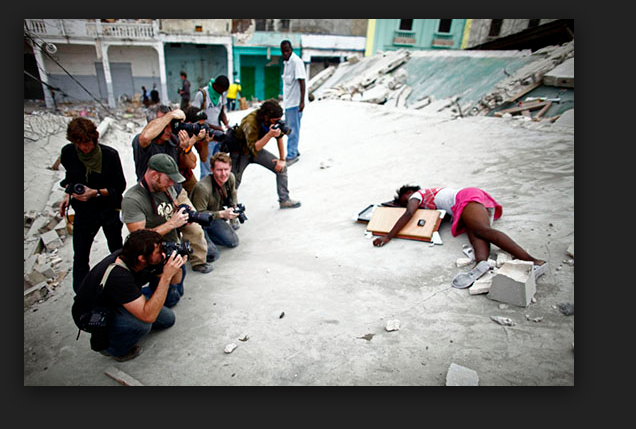