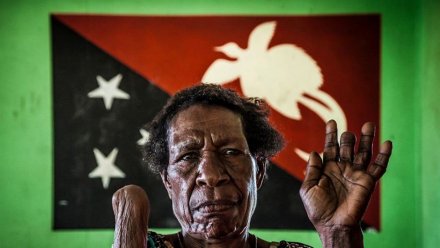 Last year I travelled to Papua New Guinea to work with the Sokhin on a documentary about violence against women in Papua New Guinea (you should be able to hear the documentary and watch the photofilm on the BBC soon). Not only is Sokhin amongst the most talented photographers I’ve had the privilege to work with he is, without a doubt, the kindest.

Some of you may be aware that the New York Times pulled a series of Vlad’s pictures last year because they claim they did not know that Vlad’s fixer was featured in the work. Two things to say about that. One, it was a mistake to not mention this to the journalist writing the article. Two, there is nothing intrinsically unethical in paying someone to give up their time so that you can tell their story.

I believe the reason why there is a rule about payments in America is predominantly economic (in the UK payments are often made to contributors). Paying for a story that turns out to be false and ends up in court case can lead to increased damages.  However asking someone to take time out of their life for a couple of days, particularly people in poverty, and not showing gratitude is pretty shallow. If a photographer can expect to be paid for giving their skills how on earth can it be wrong to pay someone for giving of themselves?

Conflicting standards are at play. Long standing New York Times contributing photographer Paolo Pellegrin went one stage further than Sokhin, by staging several documentary photos with his assistants and then allowing false information to be entered in the captions. The real difference (apart from the staging of the pics) is that the assistants were probably working for free, which must make it OK, because there’s nothing unethical about relying on free labour is there? Did the New York Times throw the book at him and remove his pics? Nope. They published the picture and gave him a platform (rightly) to explain himself.

Whatever your opinion Sokhin is worth persevering with.  He forms deep relationships with the people he photographs. They have huge affection and trust in him. I have witnessed this on multiple occasions. His work is often collaborative with the people he shoots and because of that his pictures should not be read as traditional news shots.

Vlad’s work on on violence against women is having an impact in Papua New Guinea. For example he was able to get the Minister of Justice  (who I’d failed to secure an interview with over six months) to sit down and spend an evening with a local campaigner for survivors of sorcery related violence. I was amazed by this, but knowing Vlad I probably shouldn’t have been. He makes things happen.

Vlad’s work deserves to get funded.

When FotoEvidence first exhibited the documentary photography project Crying Meri we had no idea how fast and deep would be its impact. Within months, the work was picked up by both the United Nations and Amnesty International for campaigns to expose the extraordinary violence against women in Papua New Guinea (PNG). International attention and a public outcry by concerned citizens brought a response by the government, which passed the nation’s first law prohibiting domestic violence late last year. This is testimony to the power of art and creativity to expose, open eyes and enlighten. By backing the publication of the photobook Crying Meri in hardcover and for iPad you can be part of this creative process at the intersection of art and humanity.