Man up for the World Press Photo Awards

I’ve already detailed on a number of occasions poor governance at the World Press Photo awards. Today I want to write about another example, worse in many ways than the others.

But first a reminder of this years self-inflicted PR failure. The chair of judges, Gary Knight, turned out to be a business partner of the winner, John Stanmeyer. Given this Knight sensibly offered to stand down but was told that this was not allowed. According to the Secretary of judges, David Campbell, there was no need for him to do so because  an actual conflict of interest would only exist if a photographer votes on their own work. Since judges are not allowed to enter their own work, the logic goes, a conflict of interest cannot exist at the World Press awards, only an ‘appearance of a conflict of interest’. This is straight out of Monty Python or Catch22.

Michiel Munneke, the Managing Director put out a statement saying ‘The four chairs and 15 jurors who participated in the process acted at all times with unquestionable integrity and deliberated in a way that ensured each entry was treated fairly and equally. We deeply regret that their professional reputations and conduct may have been called into question, and we stand with them to reject any accusations of impropriety.’

Whilst regretting the fact that the award was diminished this year he could also recognise that there is a credibility problem when the chair of judges is required to chair over and vote on the work of a business partner. And once he’s recognised the problem he could introduce a solution; the ability for someone in these circumstances to abstain. Campbell claims that it would be too hard to administer; if that’s the case they should bring in someone clever enough to make it work; it’s not as if World Press would be inventing the abstention.

All awards have problems. They rely on humans. No-one should be surprised, and mostly people aren’t, that dodgy stuff sometimes goes on. The World Press awards are better administered then most but despite that a former chair of judges of a World Press competition  told me that an award was rigged. A discussion was had outside the judging room. It wasn’t done for the personal gain of any involved, but it did mean, if the chair is to be believed, that something was picked for an award the judges didn’t think was the best. That’s not the only conversation I’ve had with a judge who has told me things are not always what they seem. Again this kind of thing is to be expected, it’s just not credible to pretend otherwise.

But let’s be honest this is not the biggest issue World Press faces. The biggest issue is that they appear to be unaware that the human race has two sexes and that black people don’t exist just to be photographed dying of starvation.

This year only 14% of entrants were women. I’m sure this is of concern to World Press and  is something that they want to address. A good opportunity would have been to recognise this during the two awards days in which a number of photographers are invited to speak and inspire. Here’s something they tweeted yesterday: 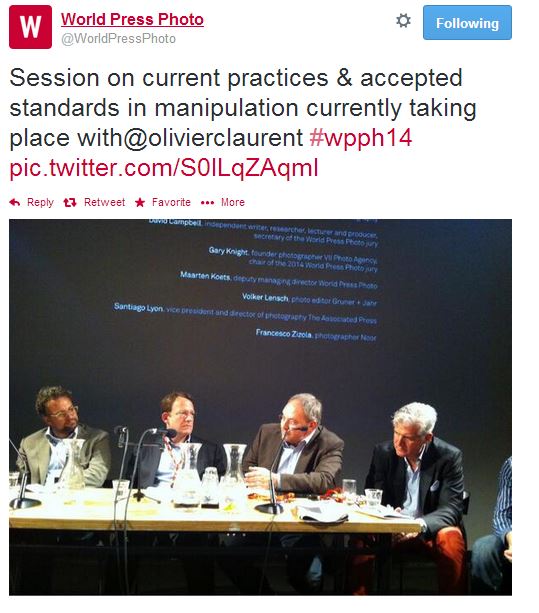 An all male, all white panel about ‘standards’ in photography. This got me thinking. How many of the invited speakers (not award winners speaking) were men and how many women? According to their website these are the 21 speakers:

Out of the 21 there is just a single woman. As far as I am aware not a single person on this list is black.

The Managing Director of World Press is a man. The Secretary is a  man. The chair of judges for multimedia and photography (final week) were both men. 21 out of the 20 listed guest speakers were men. One woman. No black people.

The photojournalism world makes such a song and dance about ‘giving people a voice’, not least poor and war ravaged women and black people but what does that really mean if the industry is so ambivalent to passive sexism/racism? In a fair and equal world it would be almost impossible to pick 21 people and there not be a representation of women and black people (and I’m not talking about the token one or two). The world isn’t fair and it certainly isn’t equal, that’s why a real effort needs to be made to tackle this issue.  Don’t worry World Press have got a great defence. It’s not really sexism. Black people aren’t really absent. It’s just ‘the appearance of sexism/passive racism.’ Whatever.