The Bronx Documentary Center (BDC) is running a show. Here’s the message they sent to documentary photographer Chris Arnade explaining his inclusion:

Apologies for the late email, we are putting together a show on short notice and just finalizing the lineup.

On Saturday we will open up our Altered Images exhibition, which examines posed, faked or manipulated documentary photography. A number of people had suggested we include your work of substance abusers and sex workers.  We have reviewed your work.  You qualify on a number of levels and will be included.

You admit to paying your subjects, which violates one of the most closely held tenets of documentary photography. Paying to photograph any person, particularly one dependent upon drugs, and even driving them to buy drugs, as you say you have done, is a clear breach of ethics and standards.

I see that you say claim, in interviews, an exemption from journalistic and documentary standards by saying you are not a journalist.  Yet you publish your photos in the Guardian, one of the world’s most prestigious media outlets.  Ethical guidelines apply.

A key guideline of the National Press Photographers Assn reads: “Treat all subjects with respect and dignity. Give special consideration to vulnerable subjects.”

Your photos of sex workers, some addicted to drugs, some with mental health issues and/or severely emotionally abused, exposing their breasts or bent naked over a bed, are a breach of this standard.  The fact that you also publish these photos on Flickr, to be gawked at by thousands, raises further ethical issues too numerous to address here.

Briefly, people who are paid by you, under the influence of drugs or mentally impaired (and in many cases have little understanding of The Guardian or Flickr), clearly do not have the ability to give informed consent to their photos being used as you have done.

We will include a caption under your photo outlining these ethical breaches.  If you so choose, you can send us up to two paragraphs in response and we will give it equal weight next to our caption.

I’m ccing our lawyer, Don Dunn, in case you have any legal issues you choose to raise.

Arnade responds here, and his response is worth reading to gain some sense of the issues under discussion.

This is the type of image that the BDC apparently object to: 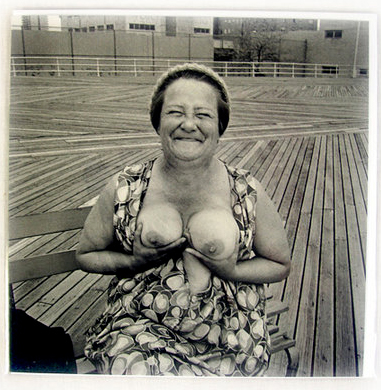 Only thing is this image is not by Chris Arnade, but by Magnum’s Bruce Gilden. He has many images of a similar ‘intimate’ nature.

Remember that phrase in the BDC’s letter to Arnade about “vulnerable subjects” ? No? Here, read it again:

A key guideline of the National Press Photographers Assn reads: “Treat all subjects with respect and dignity. Give special consideration to vulnerable subjects.”

But Gilden’s work is not included in the Bronx Documentary Center’s line up. Presumably because he doesn’t (apparently) confess to occasionally paying his subjects.

However, do they give informed consent? I have no idea.

How about images used without consent due to mental incapacity? BDC are concerned about those too: (quote)

“…some with mental health issues and/or severely emotionally abused…”

Do you think the (un-named) mentally ill (or mentally handicapped) ‘patient’ pictured here gave informed consent? I doubt it. Does that matter? For some people, yes. For others, probably not. The BDC for reasons known only to themselves have not included Hammond’s work either, in their catch-all “vulnerable subjects”.

And here’s Arnade’s work. Used with the subject’s consent, and the story behind it here. 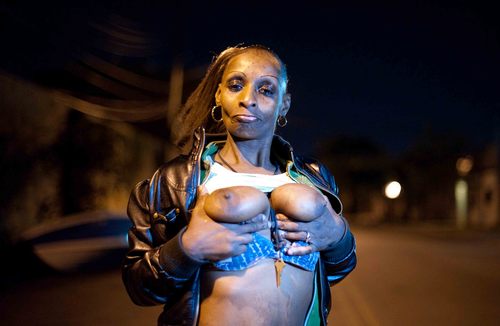 Do I like Arnade’s work, or Gilden’s or Hammond’s for that matter?

I recognize the photographer’s skill as image makers. But more than that I recognize something they all share in common, an interest in the human condition in all its forms and a willingness to interact with it. Their work is direct and engaged (and issues of informed consent/exploitation aside) as a reflection of the world we live in there’s a lot of it that makes me very very uncomfortable. Which is perhaps as it should be.

But more than that, in all of their work I see a connection with the people they photograph, you can’t be this close to people without them responding to your presence, and for the most part I see some acknowledgment from their subjects of the photographer’s proximity, and in some instances an active engagement with the photographic process.

These photographer’s willingness to wrestle with portraying the difficult issues of drug addiction, mental illness, or mental handicap and their subsequent use of the work is very contentious, and open discussion about this is healthy and important.

Sadly however the Bronx Documentary Center, for whatever reasons, and despite their morally superior tone towards Arnade, are not interested in engaging with the ethical conundrum such work presents. Gilden and Hammond could both be included in their ‘Altered Images’ show, but it seems its only Arnade, and unless I’m mistaken its because he openly admits he offers money and personal support to his subjects.

So its the money the BDC objects to. Giving it to subjects is wrong.

But making money from subjects? Seems profiting as a consequence of photographing (possibly vulnerable) subjects is ok though, nobody is bothered about that, not at all:

There’s a real debate to be had around all this. BDC had a fantastic opportunity to get in about issues of representation, power, the politics of documentary photography and exploitation, but they dropped the ball. In fact maybe I’ll send them this FANTASTIC card to tell them that.

But leave it blank.