Drowning in a sea of photographs

This appeared recently on Change.org to elicit signatures for a petition titled:

No more drownings. Immediate sanctuary for those fleeing from war 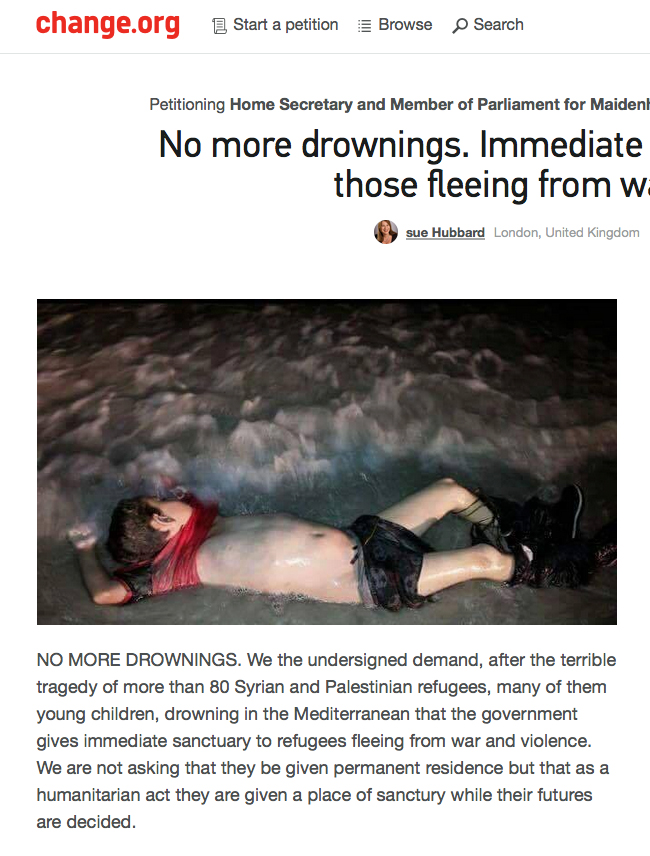 Duckrabbit (rightly) asked who the subject of the image is, and where the image came from. 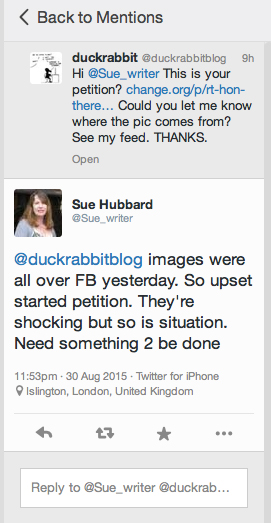 Why is it important to know the provenance of images?

Various reasons: so that the individual may be known, so that their family may be informed and comforted, importantly so that the ‘truth’ of what is being shown may be verified, and finally (mainly) so that basic human respect for a lost life may be accorded to what is otherwise a nameless child’s corpse. In the absence of some attempt at establishing the veracity of emotive images they, and the people using them, are left open to accusations of fakery, cheating and manipulation.

How easily does this happen?

Well, this was on Twitter this morning on the Free Syria Media Hub’s feed: 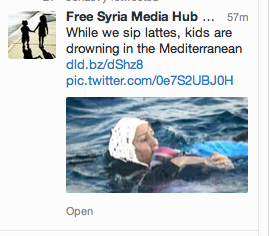 A quick search revealed this: 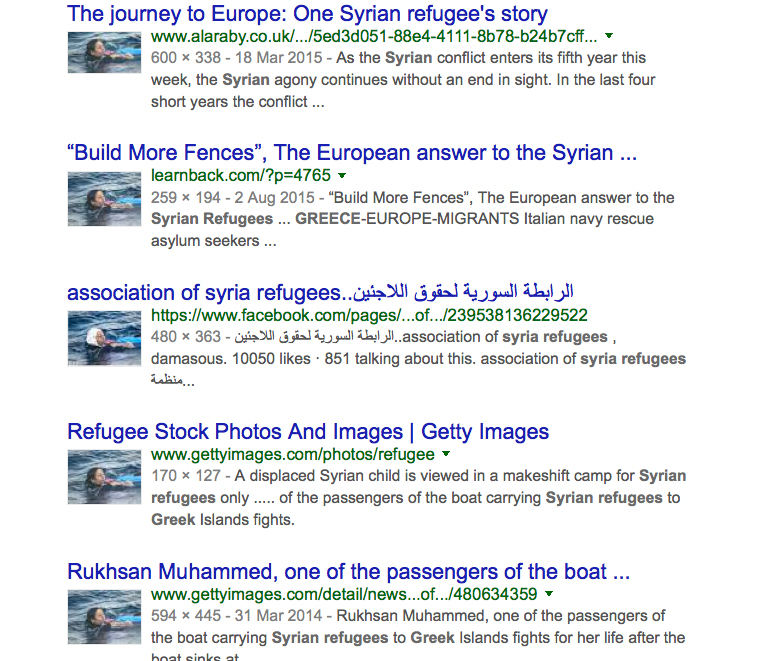 This is a manipulated image, in the original shown here the woman does not have headwear: It is not as if we are so short of images of drowning people that we must doctor old images to make ‘new’ ones.

But crucially this is not just a nameless floating migrant/refugee. This is Rukhsan Muhammed. She has a name, had a life, and may in fact have managed to create a new life for herself: this image was taken in 2013. The full caption reads:

“Rukhsan Muhammed, one of the passengers of the boat carrying Syrian refugees to Greek Islands fights for her life after the boat sinks at Aegean Sea near the coastal city of Balikesir, in Turkey on November 29, 2013. Rukhsan Muhammed told a new aspect of her family’s dramatic escape, to Turkish authorities during her appearance in court this week. She explained that following the accident she used her suitcase as a means of life preserver to keep her 1,5 years-old child, Mirwan Muhammed, from drowning. But despite of all her efforts her son fell off the suitcase and got lost amongst the waves.”

Wherever she is now two years later, that new life should not be overtaken by a faked image of her purporting to be a recent casualty of this terrible crisis, and at the same time reminding her of the awful fate that befell her son.

And it should also raise the question for us: WHAT have we been doing to alleviate this humanitarian disaster in those two years?

Images matter, it’s important how they are used, where they are used, and if we are so powerless we can do nothing else the very least we can do is celebrate the life of a victim by according them the dignity in death of naming them.