Working in the free world

The desire for ‘free’ is pretty widespread in the photo business these days, right across the creative sector in fact, with writers, illustrators and indeed anyone else with a viable skill expected to provide it for free, with the dangled carrot of ‘exposure’ and other intangible ‘benefits’ that ALL bank managers will reject with a derisory sneer.

But must ‘free’ be such a compelling aspiration? Should we all trample on each other in the rush to be the biggest provider of free in a lemming-like race to the bottom?

I wrote about young Jack Alexander recently following his fstoppers article on working for free. You may not have read it. Here’s a link to my duckrabbit post about it. Worth reading to get a full flavour of where this post is going.

But to shortcut it, here’s a quote from my article to get a flavour of what Jack is on about:

“Jack’s had three years of experience as a photographer and has an interesting business model:

“I didn’t know what to expect when I first started working in the creative industry, but I soon learned the extent of how many jobs are expected for absolutely no payment in return. But is it really all that bad? Speaking honestly, I don’t think so. Here’s why I think we should stop complaining and, within reason, keep saying “yes” to more free projects.

Recently, I was trying to source a creative team for an upcoming photoshoot — just the usual: a makeup artist, hairstylist, and wardrobe stylist. The shoot was with an up and coming musician signed to a major record label and the feature is to be inside the next print issue of a renowned British magazine. I thought it was cool; this is exactly the type of project I want to be working on and exactly the kind of photographer I want to be. But when asking around to see which of my regular contacts were available and interested, I couldn’t help but notice a reluctance from quite a few of my peers once they found out there would be no payment. One said they were focusing exclusively on paid work right now. Another asked if it was for the magazine’s front cover and soon lost interest upon finding out that it wasn’t. This, to me, was really strange — to completely write off the opportunity to have your work printed in a respectable publication. I can’t help but feel it was almost a little arrogant for these people to be seeing nothing further than the prospect of money. It got me thinking about the state of the creative world.”

I’m not going to make any judgement on his decision to work for free other than to say I think he could do it differently, and in a way that is more advantageous to his future career prospects.

I tried to contact Jack for some comment on his fstoppers piece, as I had a burning question. He proved elusive. But finally I was able to get him to respond. My question was really simple: did he get paid to write his article on working for free. Here’s his response: 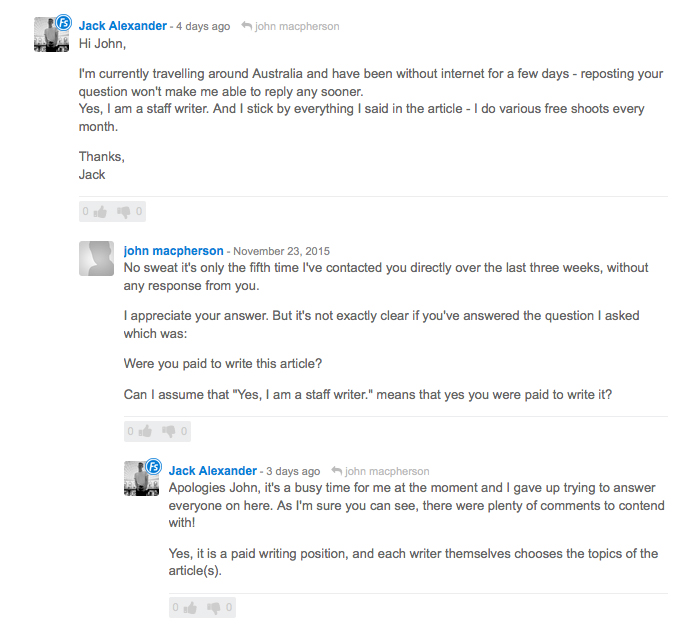 I’m not entirely sure that Jack realizes the irony of being paid to write an article that extols the virtues of working for free. I guess if he REALLY believed what he was writing he’d have been prepared to write it for nothing.

So here we are in the digital age of creative endeavour. Not only is there a sector of the industry that expects you to give them your work for free, there’s another that just takes it. They cut out the middle man (‘permission’) and just help themselves.

It’s a cool business model – they get lots of choice of ‘free’ stuff and hey, the web is the wild west and the buffalo are still roaming aplenty so they think nobody will notice they just took that one cute furry one for their in-house corporate report.

Many photographers use the online tools available to them to track down offenders and send them invoices. I did this very thing a couple of weeks ago.  A few hours with google’s reverse image search and hey presto several offenders, and what do you know, on receipt of my invoices with screengrabs of their misuse and a peek into the File Info © bearing my contact details, they paid me. All of them. 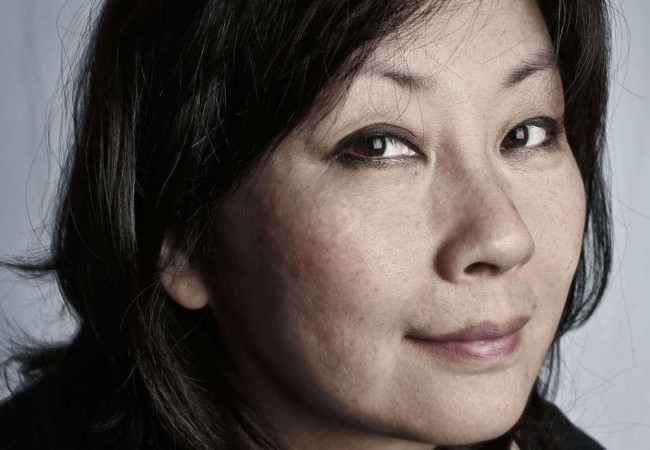 Renowned photojournalist Yunghi Kim did the same, spent some time chasing copyright abusers, and getting them to cough up. As she’s been around a while, and has a lot of work online, there were many many many misuses. But Yunghi is smart, and had registered the images copyright which gave her considerable leverage over offenders, and having pursued them and recovered a fair amount of money, has made a wonderful gesture with the proceeds. 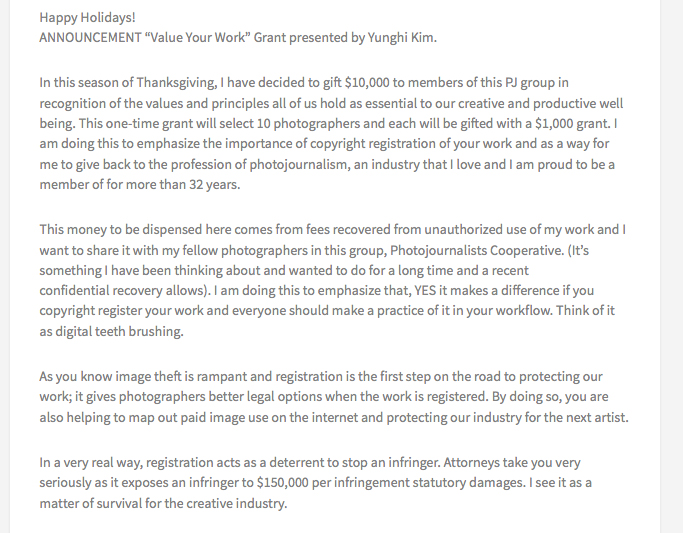 Here’s how it works (now please try and keep up, I know this will be a struggle for many of you new to the creative business and the expectation of working for free) if you’re a member of her Photojournalists Cooperative you can write Yunghi a submission with an idea, and if she likes it Yunghi gives you $1000 and in return you do this thing called ‘work’ – you use the money to fund the production of photographic projects that you would otherwise not have been done. Genius!

Someone talented and deserving gets money, and in return we get compelling visual essays on subjects we need to see, consider and understand.

Now why has nobody thought of this concept before!

You can read all about it here on Photoshelter’s blog.

Will this novel idea of being paid to work as a photographer catch on? Watch this space………..

*And a PS for young Jack Alexander, and I do write this with the greatest of respect for you  – if you’re still insisting on working for free please consider following my advice in my original post, about invoicing – a proper fully costed invoice for your time and ALL production expenses, then ‘adding’ the 100% discount. Unless YOU put a value on your work in that way, your ‘clients’ will have no idea what you’re worth, and fact is many of these image users need educating about the true cost of ‘free’, the ‘free’ that pays THEIR wages. And at the end of the day you can be known either as ‘the free guy who does it for free’ or ‘the $5000 guy who’s really worth $5000 and generously does it for free’ ? Why does that matter?

Because when you decide to start charging, only one of those ‘might’ be a basis upon which to build a business.

Know your worth and let other people know you’re worth that too.