We went to Norway on a shoot. Someone died. This is the story. 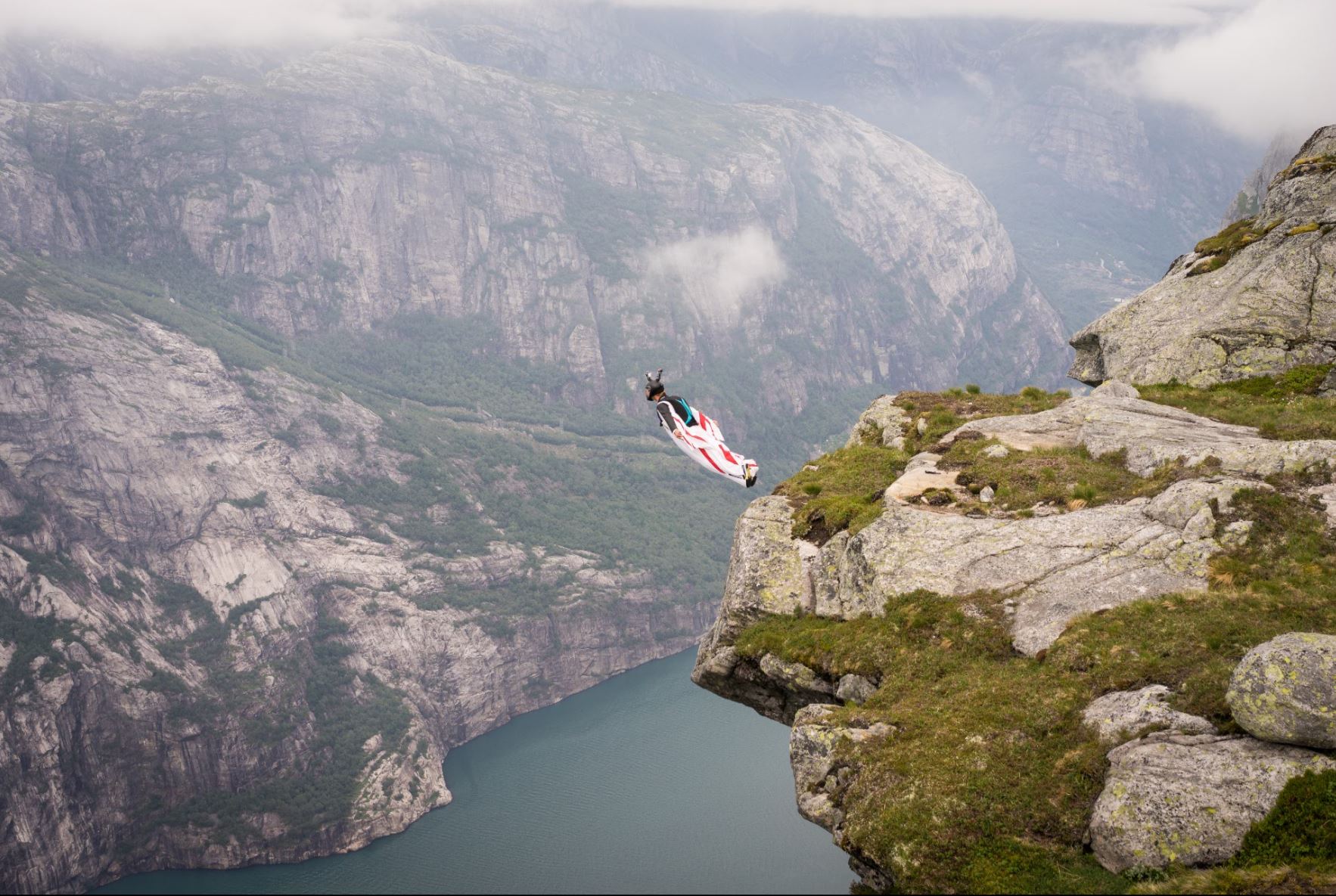 No. You’re not listening. I really don’t like heights.

So when Pete asks me to make a film about a wingsuit basejumper who would be chucking himself off a 1KM high cliff in Norway I say yes, but what I really mean is no.

On the upside the weather is great, Norway is stunning and we had a helicopter to get us and our kit up to the top.

On the downside someone died.

We’re at a ‘boogie’. A couple of hundred people from around the world gather for three days, throw themselves off cliffs and help sell go-pro cameras.

Chris is filming from the little strip of land at the bottom of the cliff where the jumpers land. Angelo, our wingsuiter, has decided to exit (technical term for jump) from a new bit of cliff. He’s waving madly in the hope that Chris can spot him from the bottom. Of course he can’t. He hasn’t got a fucking clue. We’re well over a kilometre away, stood in the wrong spot, the size of ants. Except for me. I spend the shoot terrified, crawling around on all fours, as far from the cliff edge as I can get away with. I don’t care Chris can’t see us anyway. It will be over soon and I can go back to bankrupting the company on expensive Norwegian beer and having the piss taken out of me for being useless at heights. Same old.

The radio goes. We’ve been told to stand down. Apparently the wind is whipping back into the cliff and if Angelo jumps there’s a fair chance we’ll have a snuff video on our hands.

I go and lie down as far from the cliff as I can and close my eyes.  An hour or two passes and I’m woken by the phone. It’s Chris. He’s still at the bottom and he’s still trying to work out where we are, even though we are no longer there.  I feel a bit bad I didn’t stand him down.

People are jumping again so I tell Chris it will be ten minutes till Angelo exits. Chris did you hear me? Chris?

There’s a pause. Not a very long one.

“Benjamin I’ve just watched someone die”. Then I hear him shout “Medbag” and I hear him running.

I hear myself call over to the rest of the team.  “Fuck. Chris just watched someone die. Properly”. I don’t believe it though.

Chris comes back on. He saw the jumper out of the corner of his eye. His parachute not deployed. He was aiming for the water and landed twenty metres from him. On the shore. The sound. That awful sound.

I tell Chris to get back on the boat and meet us back at base. Later I see the guys girlfriend, who watched from the top, carried to the helicopter. Some poor sod who’s saved all year for the thrill of jumping off the cliff  breaks the news she already knows. I am reminded that the grief of the living is more traumatic to deal with than the burial of the dead.

Nothing to do but wait. I go back to sleep. Meanwhile the police come. Ambulance. A priest. TV Crew. They do their job. And a few hours later Angelo jumps. We film it. And then we go to the bar.

A few words are said by a guy in fancy dress about the ‘fatality’. Why he died. Basically human error. He’s not mentioned by name. Somebody has to ask. Then somebody has to check. It’s Michael Leming. A minutes silence. Then the party. It’s fancy dress night. We make our excuses.