LensCulture and the commodification of rape

Magnum Photos and LensCulture are running a photo competition. One of those where you give them lots of money and in return if you’re one of  the lucky ones they give you ‘exposure’.

Let’s just cut to the chase. There’s no way of dressing this up.

In order to promote the competition LensCulture used a photo allegedly of a trafficked child sex slave being raped.

Yes, you read that right.

No, this is not some kind of sick wind up.

I’m not going to post the picture here but in it the photographer is stood over the rapist. We see his naked back and the back of his head.  We can see the girl’s face. She’s looking away from the camera, obviously distressed, but she is fully identifiable. Her name is ‘Beauty’ (you can see it here where the photo has been altered to protect the girl’s identity).

Only the rapist is given the privilege of anonymity.

The text wrapped around the photo urges you my photography friends to not ‘miss out’ on ‘recognition’ by entering the Magnum Photography Awards: 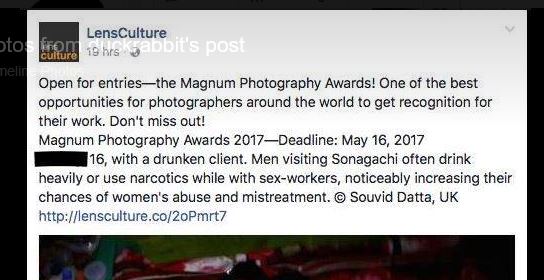 The post had been shared widely before it was taken down (only at the photographer’s request who  specifically told LensCulture not to use the photo).

Magnum also featured more of Datta’s project on the header of the competition website.

Can someone explain the mentality at play here? Is it because photographers look at the picture and think:

‘Oh look there’s a child in a cage crying.  Maybe if I enter a picture of a trafficked child being raped or caged up and crying I can also get myself exposure.’

Pure and simple this is the commodification of child rape.

Does the photography world get any more fucked up than this?

In the UK, taking and sharing this photo would be a criminal offence. It’s a criminal offence even to name survivors of sexual crimes unless they have expressly given permission, and in this case, a vulnerable child is not able to consent.

It’s my guess that if human rights activist (formerly of Amnesty) Rob Godden hadn’t pointed out how indecent the use of the image was it would still be being shared on Facebook. At the time of writing LensCulture have offered zero response. They were totally disinterested in the many comments on their post pointing out how abusive the image is.

So let me put it straight to  Jim Casper (Editor), Kamran Mohsenin (CEO) and Laura Sackett (Creative Director), what else am I to presume other than that your company has an horrendously warped and racist relationship with the world? One in which you are only able to see photos, photographers and the people in their pics as objects of profit.

Did anyone at LensCulture consider that the children of ‘Beauty’ might need protecting from the trauma of seeing pictures of their Mother forced into sex spread across the internet?

And what is going on in your heads that LensCulture would seek to profit from a picture of a child sex slave being raped?

What is going on in there?

That girl by the way has a story (found on Datta’s website). Read it:

‘Aged 12, her family arranged her marriage with an abusive 23 year-old man. She went on to have her first child aged 12. The following year, she fled following her mother’s death taking refuge with her elder sister, then 19. Within two months, her brother-in-law attempted to force himself upon her, yet her sister did nothing, instead demanding she leave their house. It was on a train to Dhaka, in search of escape and work, that Beauty and her one year-old son eventually met their trafficker. ‘A vast, wiry-haired…wild-eyed woman’ promised her a menial job with substantial renumeration; minutes later Beauty’s water bottle had been spiked with a sedative. When she awoke she found herself in a half-way house in Nonchapota, on the Bangladesh-India border, awaiting her transfer and sale to the brothels of Sonagachi.

Beauty embraces her two sons – Nayan, 5, and Ridoy, 4. The first was born when she was 12, and the second, a year later after her first few months working in the brothel. The two have been held as bargaining chips by her previous brothel owner when Beauty refused her work as a ‘Chukri’ (forced sex-slave). Now they both stay in a nearby NGO shelter which Beauty visits every few days. “Holding them, tight, close to me is the only thought that gets me through the day… I don’t need saving. I died a long time ago. It’s them who need saving. It’s for them that I do this work. I hope I can at least save them from this world… that I can give them some of the important chances in life that I never had.“

This is a horrific case where one abuse, one exploitation has been heaped on another.  Where a real human, with a real story, real children and real feelings is reduced to clickbait for a shitty competition in which you can trade your soul for exposure.

If you are concerned about this story I encourage you to politely reach out to LensCulture and ask them to respond.  You can post on their Facebook Page, or Tweet them. I am personally dismayed at the number of photographers who express disgust in private but are afraid to do so publicly. Change will not happen by remaining silent and this commodification of the most vulnerable is not something a healthy community should accept.

To those who argue, from a place of absolute privilege (the photographer went to Harrow) that we need to see photos like this to make people care, who are you mixing with? Because no-one I know needs to see a photo of a child being raped to care. If that’s you. Sincerely. Seek help.

Update 1: LensCulture have sort of apologised on their Facebook page (please read and if you feel like it comment). According to them Datta acted ethically. They then cite UNICEF’s guidelines on working with children. Which is kind of crazy because Datta’s work is completely in contravention of them:

Always change the name and obscure the visual identity of any child who is identified as a victim of sexual abuse or exploitation.

Update 2: Datta has issued a statement. It’s pretty shocking. You can read and comment on his Facebook page here. Basically she made him do it.  And anyway he is above the law. I don’t think that argument would stand up in court.

Update 3: LensCulture have deleted their first apology and issued a new statement on Facebook.

‘We at LensCulture made a terrible mistake in judgment last Friday by publishing an image depicting sexual violence against a young girl on our Facebook page … We condemn the lack of ethical standards used to create the photograph in question, and we apologize for publishing the photograph (which should never be published anywhere).’

Update 4: Following duckrabbit revealing on Twitter that Datta has plagiarised the work of Mary Ellen Mark he has deleted all his social media.

NPR have reported all of this here.

Time interviewed Datta here and and then following strong industry criticism that Datta was not questioned on the photo of Beauty a follow up article was published here. 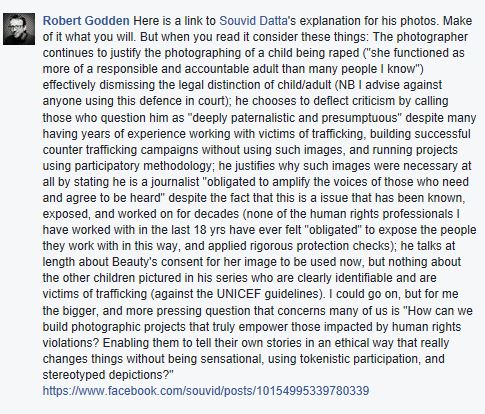