I produced a BBC strand where the male presenter was paid at least 60% more than the female presenter. It’s toxic and it has to stop.

I’ve followed with interest Carrie Gracie’s brave decision to publicly resign from her job as the BBC’s China Editor in an attempt to highlight the broadcasters failure to pay men and women equally.

Following the BBC’s abject response to Gracie’s open letter I want to share my experience of the impact of unequal pay at the BBC; something that damages both the culture and the output of an organisation that I love.

I worked as a producer for the BBC for ten years leaving in 2008 . For many of those years I had the great pleasure and privilege of producing a weekly strand on BBC Radio 4.

There were two contracted freelance presenters each taking it in turns to present the programme.

One was male. One was female. Both were excellent, well liked, talented presenters. Both massively loved by the listeners. Both were doing exactly the same job.

Not similar. Not almost the same.

I can’t stress that enough.

But they weren’t paid the same.

Do I need to point out how indefensible that is?

The only thing the female presenter didn’t do was regularly go on the piss with the editor.

For extra measure the female presenter was treated terribly.

She was made to feel by (male) BBC management that she was in some way inferior to the other presenter. She had to be didn’t she. They were paying her less.

The growing audience; growing approval rating of the programme; growing number of letters praising the female presenter’s programmes and the professional opinions of her producers told a different story.

None of that mattered.

A lot of  our energy was spent dealing with the knock on effect of her treatment; energy that should have been going into the programme. Battling to pick up a demoralised presenter who was justifiably angry at her treatment.

The presenter was also made to feel insecure enough that she feared if she or her agent raised the issue with management her contract would not be renewed. I have no doubt that’s exactly what would have happened.

The issue of unequal pay affects everyone. It’s bad for business. It leads to toxic work environments where very talented, hard working women are undervalued. Then they leave.  That’s bad for BBC audiences.  Just as paying over inflated wages to managers and presenters that can be replaced is bad value for the licence fee payer.

BBC management have got away with it until now. Thanks to brave women like Gracie, who let’s not forget turned down a massive pay-rise,  they are being called out. BBC staff are openly questioning why management get paid so much for in many cases being very, very average. They’ve literally had since 1970 to sort this. Only wilful negligence can have let the situation go on so long.

Graham Ellis was responsible for the oversight of my former department. He’s now Deputy Director of Radio on a salary of £213000 a year.

No disrespect to Ellis. I’m sure he performed adequately and avoided drama,  but no-one in production could understand why he was paid so much in 2008, let alone now.

Except perhaps those higher up. Earning more. Where at the BBC  you were increasingly rewarded for cutting costs, keeping troublemakers quiet, sanitising programmes to avoid complaints and no-one cared if you paid women presenters less.

There was probably a Christmas bonus to be had in that.

Just as long as you got away with it. 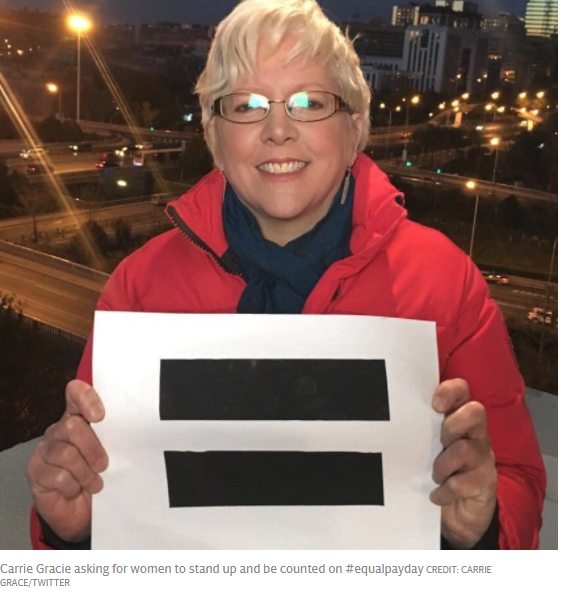