I like making images that do something. Something that goes beyond their simply being ‘nice’ or ‘colourful’ but which instead makes something explode in the viewer’s head, makes them go “Oh!” and challenges them to…well…think differently, think more widely. (I hasten to add that it doesn’t always work though which is why I keep plugging away at it!)

I recently gave a talk to a local photography group on ‘making photography work’ and one project I mentioned created a hearty discussion about the ways we can use photographs in novel ways.

I’d framed my talk by quoting a couple of comments I’d read recently regarding photography’s current status: gems of wisdom from photography pundits such as  “its all been done before” and “the sheer volume of work produced every day makes photography meaningless” and my personal favourite:  “we’re living in a post-photography world” which has to be the daftest statement ever when you consider its implications: “Should we not look at any of these images then…” I asked the group rhetorically, “…just ignore them and their potential?”  And then added “…or should we try to use them in novel ways that places the responsibility for their worth on the viewer rather than the photographer or subject?”  and then left them to ponder that question for a few minutes.

I then explained to the group about a ‘visual sculpture’ I’d devised as an arts project a few years ago, working with a group of adults with ‘learning difficulties’in Social Work care. We’d decided to create a piece of work on the theme of deaf-blindness for a competition and had tossed around various ideas that might provide a disparate group of people some creative challenges and opportunities: woodwork for some people, portrait photography for others, and a few folk simply posing and offering words or phrases they wanted included. The result was even better than we’d imagined. 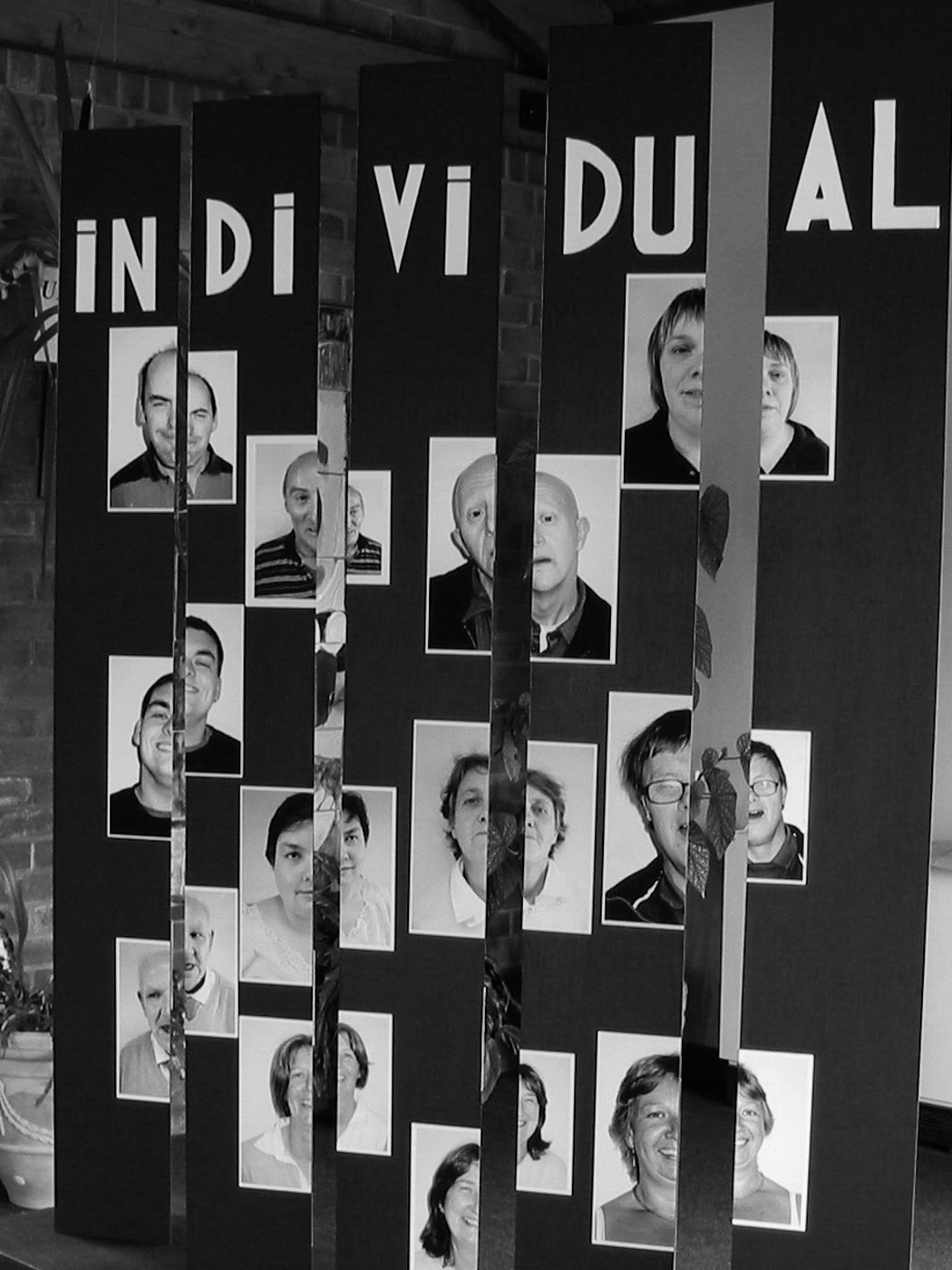 The basic idea was to create a 3D object – a plinth about 2m long with 6 triangular pillars placed in it, something of a cross between the obelisk from ‘2001 A Space Odyssey’ and a vertical zebra crossing. Each side of the 1.8m tall pillars containing text and/or images. Crucially however many of the main images had been ‘split’ vertically so that each portrait was composed of two halves. But each half printed to a different size, one half fractionally larger than the other, and carefully designed so that when viewed from a specific distance each half coincided with the other giving the correct perspective and was able to show a whole portrait.

By placing the larger half higher or lower on the next pillar beside the smaller half we could control where the viewer had to be in the physical space surrounding the piece in order to view the whole image. Sometimes they viewer needed to be down low, sometimes up high, in fact one was so high a chair was required.

The underlying idea was that deaf-blind individuals (and indeed anyone with particular communication needs) requires a specific approach made to them in order for us to be able to communicate with them, it has to be on their terms, and if we cannot do that the fault is ours, not theirs. We own the failure whether we like it or not. 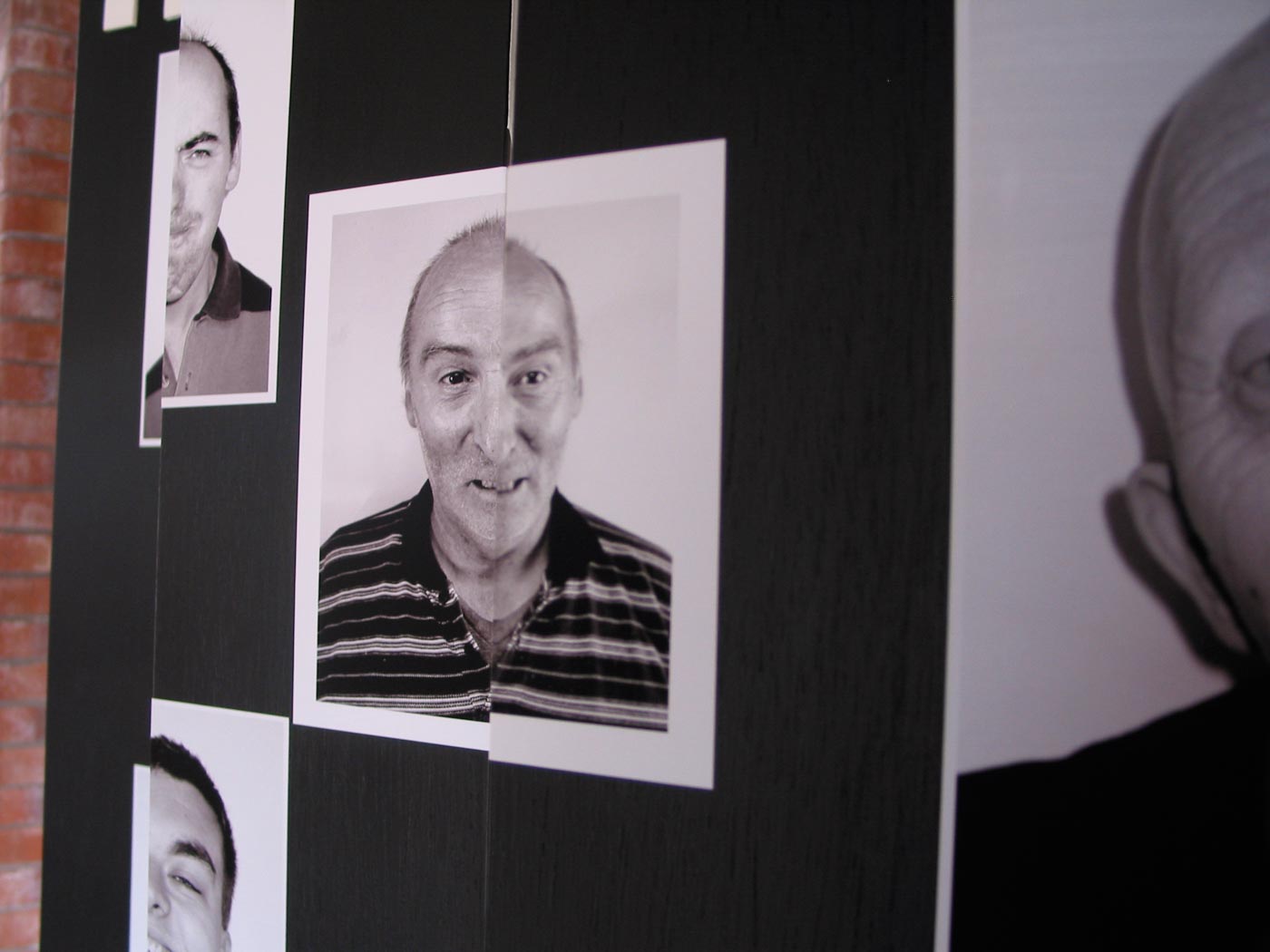 The response of the public to the sculpture was overwhelmingly positive and fascinating – it was physically impossible for two viewers to be in the same spot to view one image, they had to negotiate with each other and take turns in order to ‘see’ a whole portrait. We left only one chair out and people had to negotiate to get the chair to be able to stand on it to view some of the images.

Taller people had to stoop to see certain images, smaller people had to stand on tiptoes. Several of the images were deliberately slightly defocused to simulate sight difficulties, and overlaid across many images were phrases that the participants had decided reflected their need to be seen as individuals and as ‘whole’ people. It was physically imposing – taller than everyone, it ‘changed’ as you walked around it and sentences appeared from an apparently random selection of words, and all the while a series of portraits of individuals came and went as you moved.

It made people stop, it made them walk, then stoop, and stare, scratch their heads, and many just stood grinning gloriously when they ‘got it’. And a few people, but only a few, got visibly frustrated that it was not ‘easy to get’. 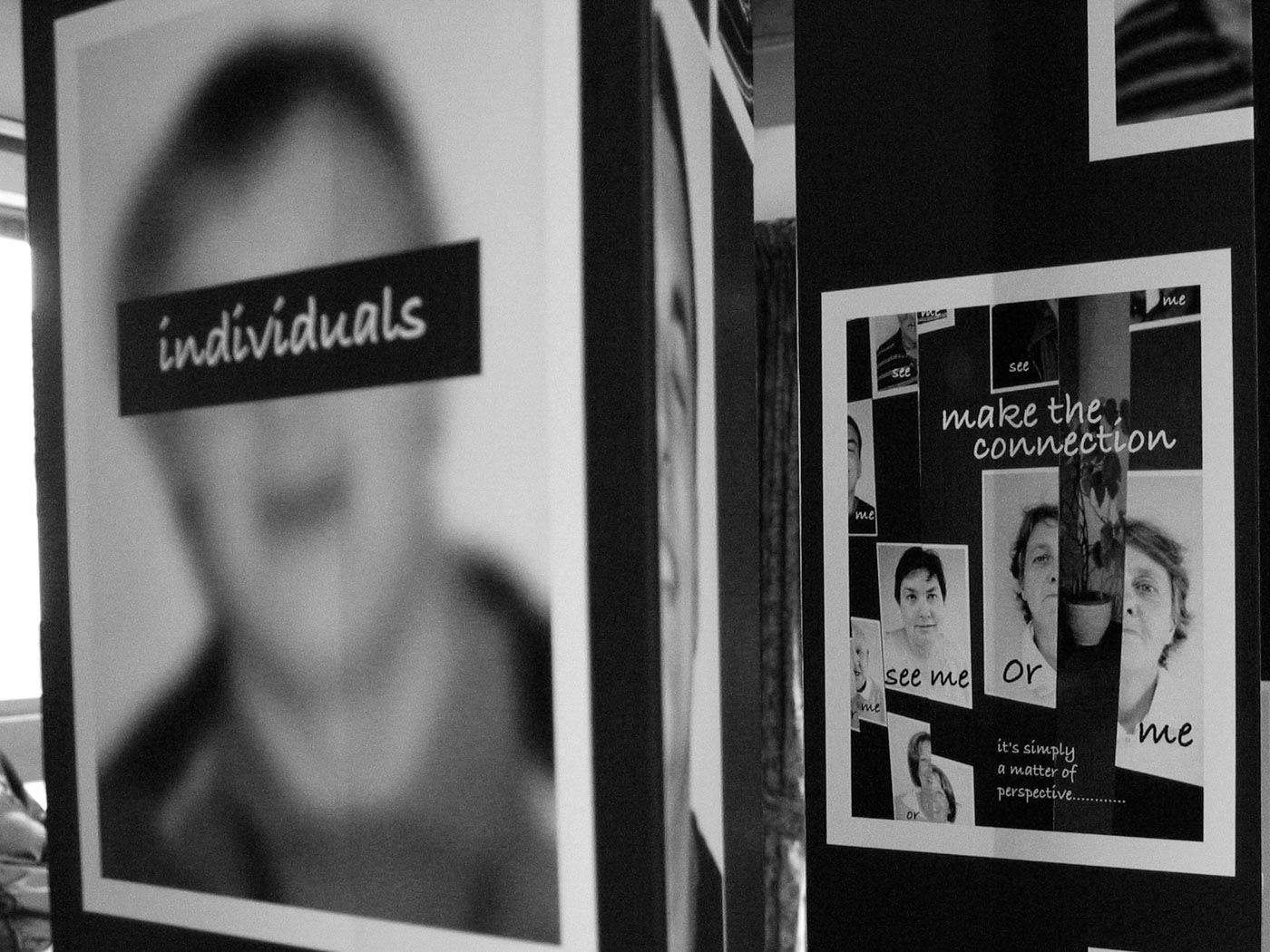 And all this from simple photographs, but when used imaginatively punching well above their weight.

Photography as a tool never ceases to surprise me with its capabilities, and the images the craft produces are themselves a boundless source of power, persuasion and potential. 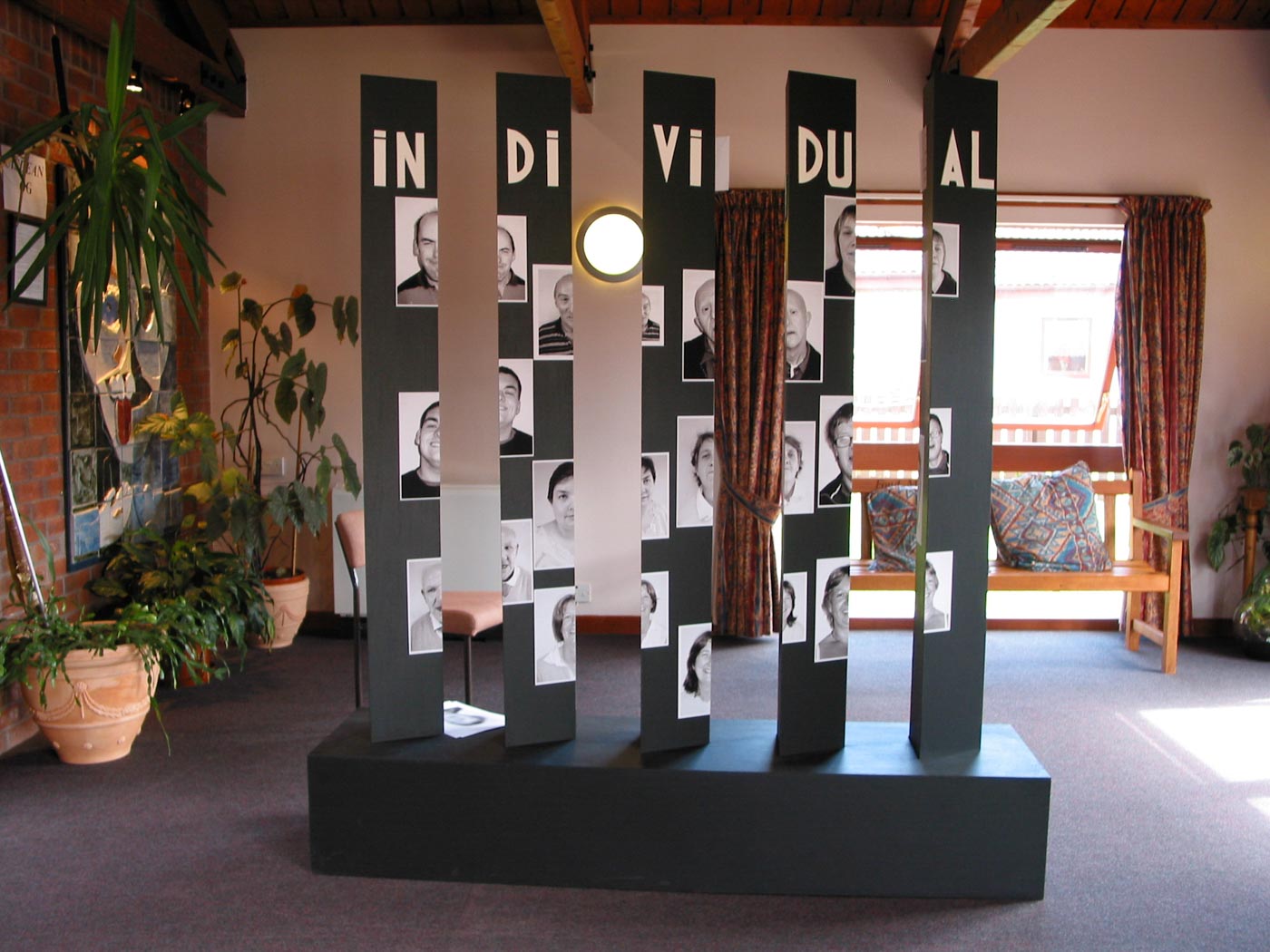 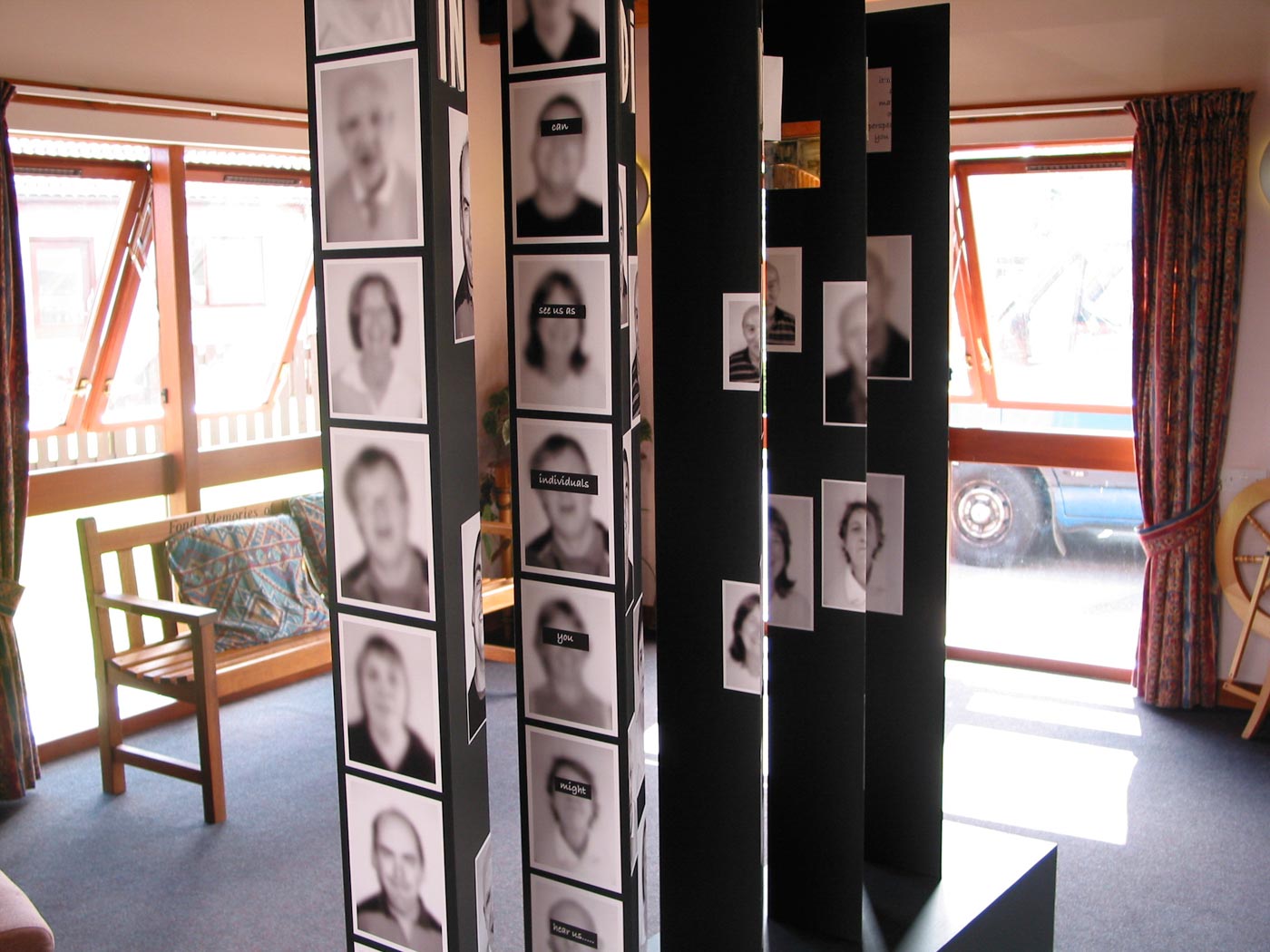 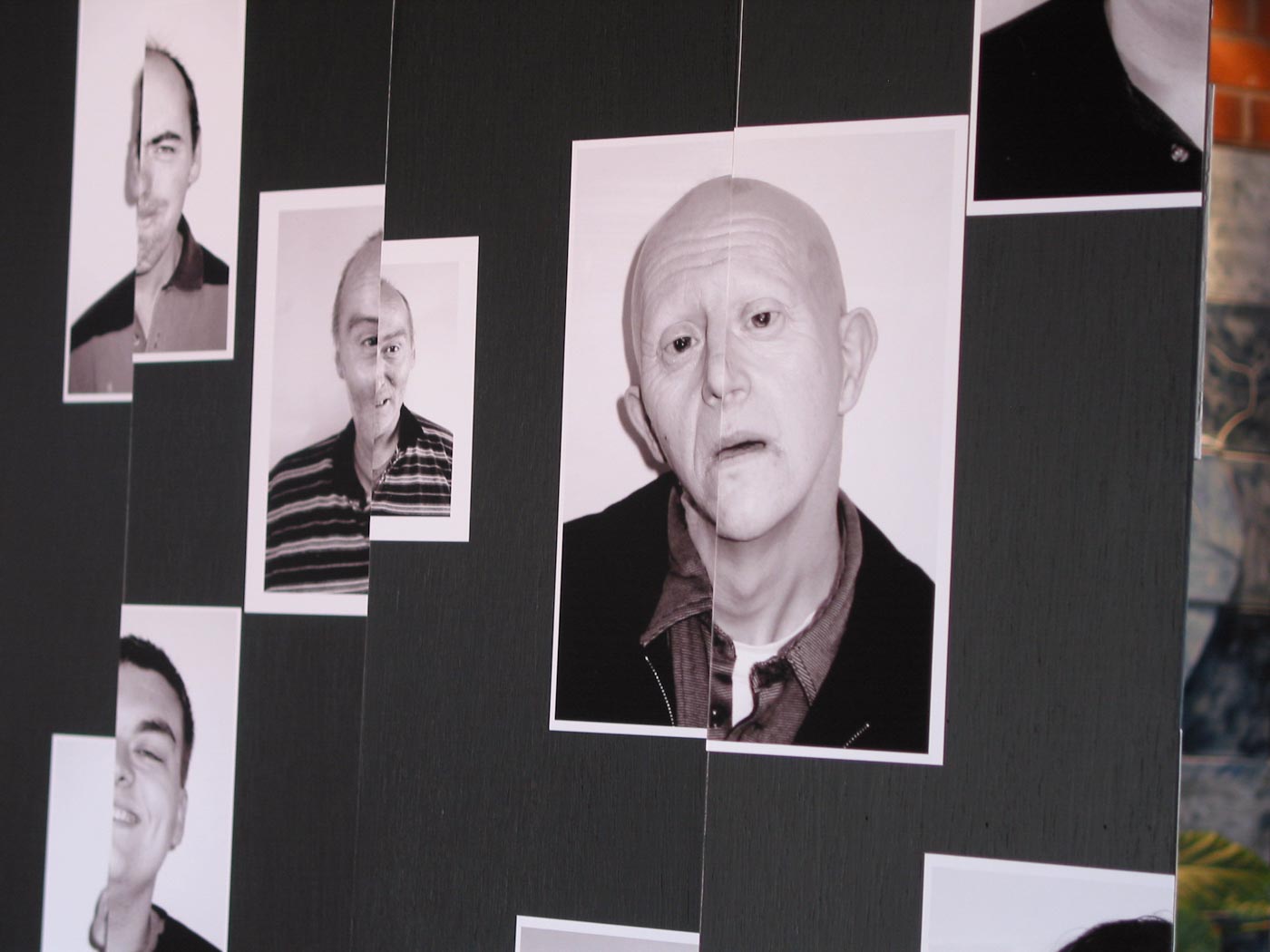 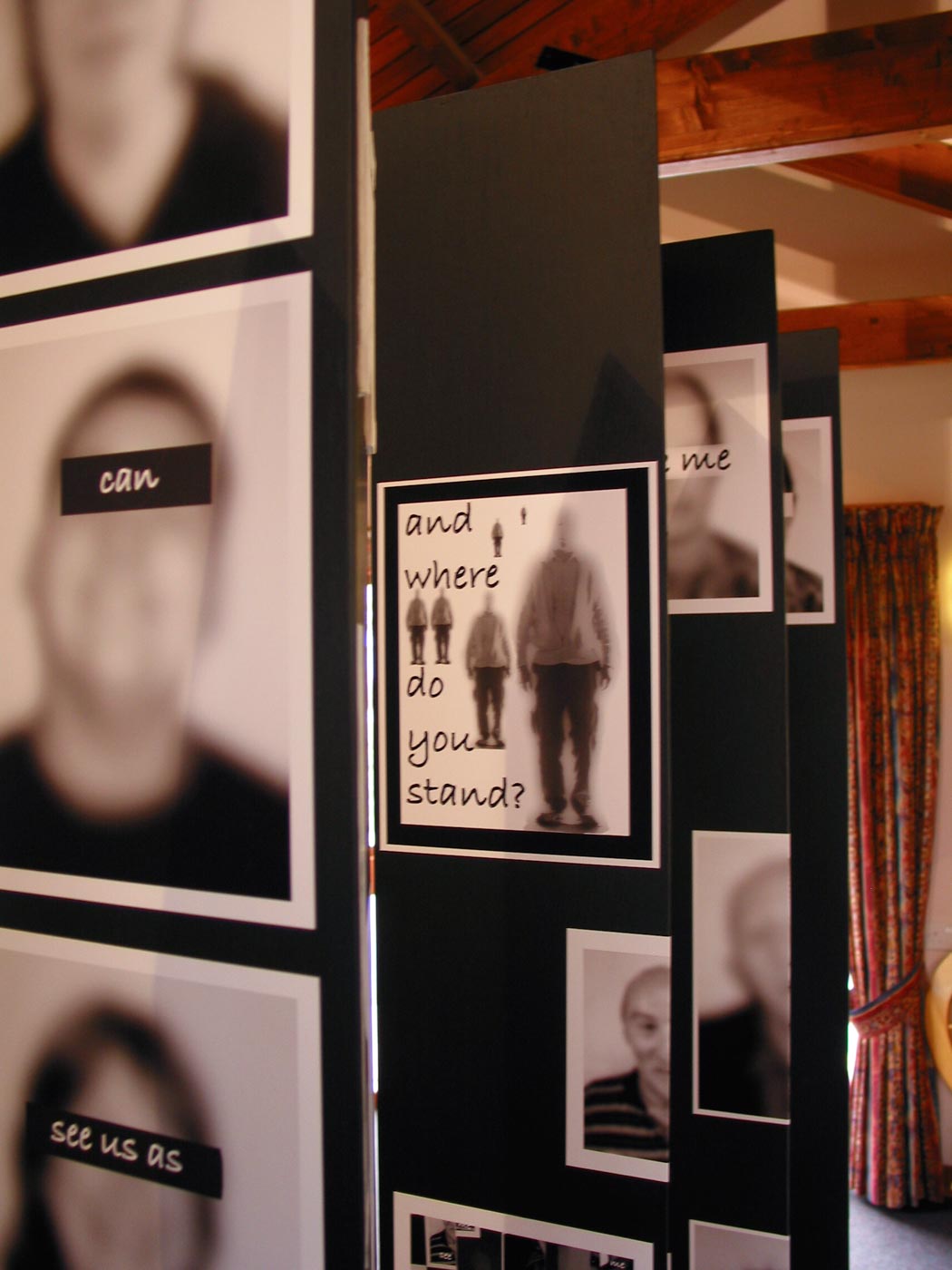 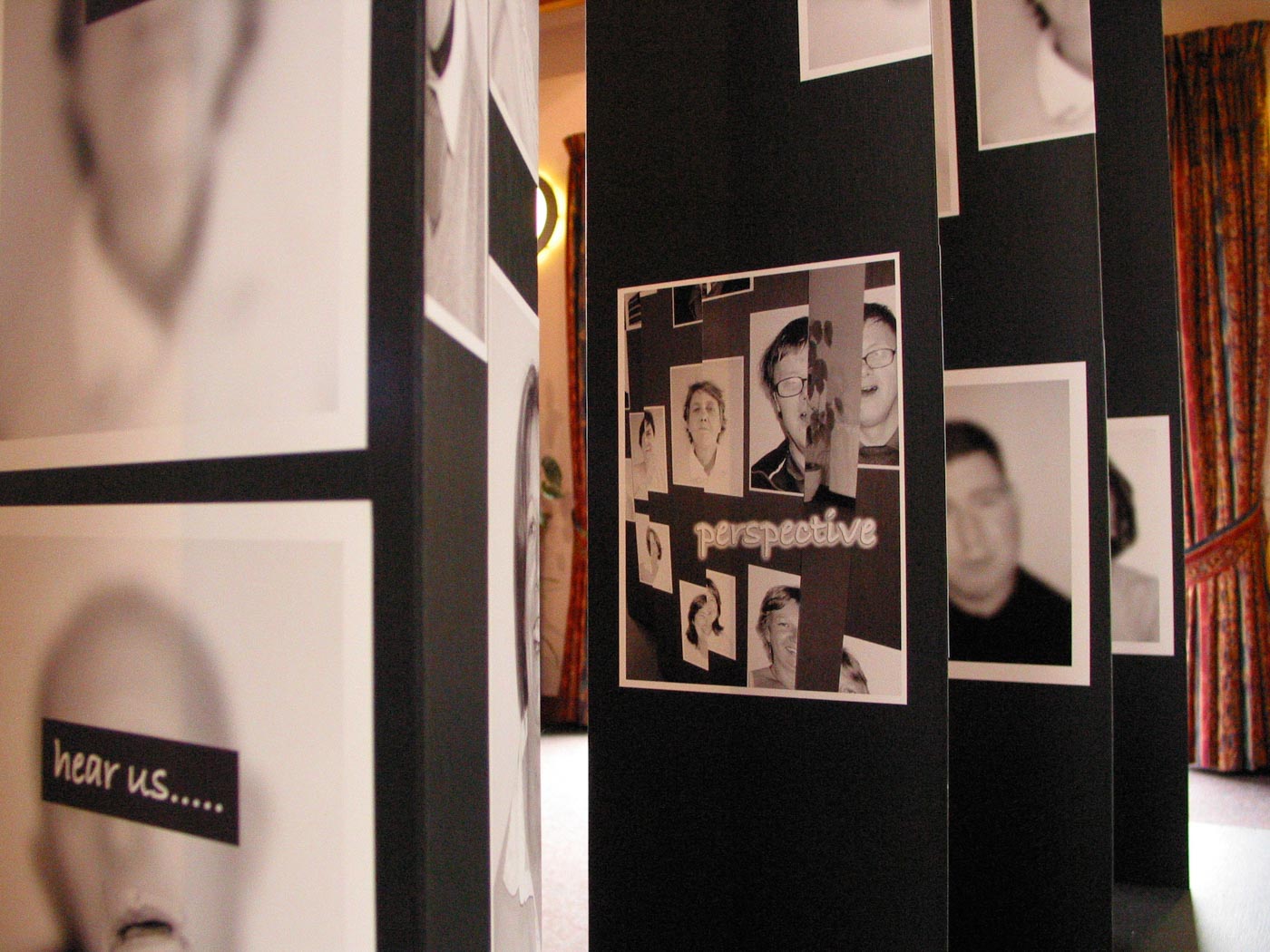