On The Inside Looking In

What’s the value of a story? To the reader it might simply be ‘entertaining’. To the teller however it might be priceless – particularly if its a carefully nurtured cultural tale, woven around local knowledge of place and people, informed by history and long experience.

The ‘taking’ of these stories or ‘cultural appropriation’ as its known, is something thats becoming all too common. A recent high-profile example (if you follow this kind of thing, and if you’re a photographer or a writer I’d argue you should do) is the JK Rowling/Native American collision over her use of native story.

For a flavour of the debate see here in The Guardian or in more depth here on the Native Appropriations website. 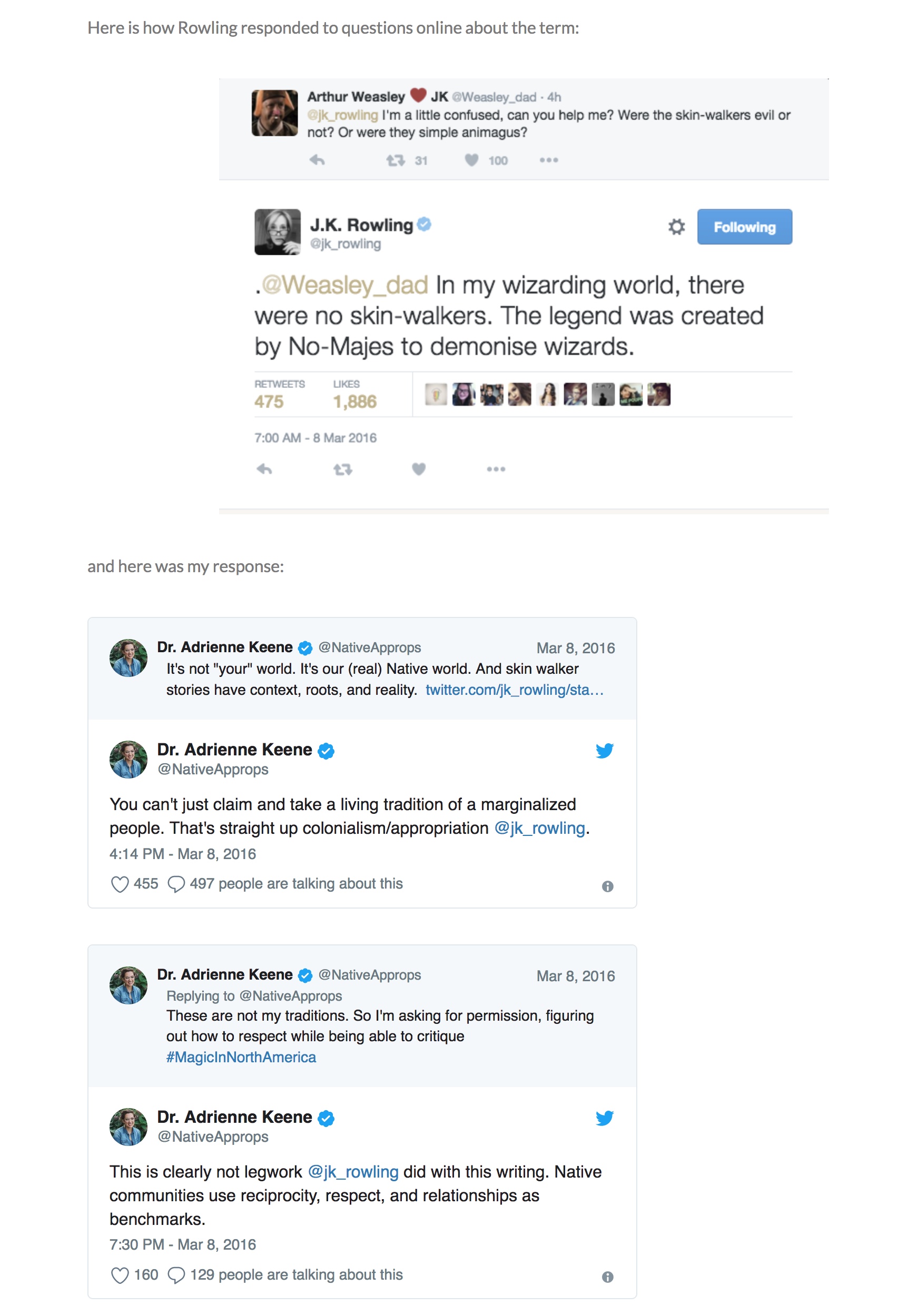 I’m sure you can draw your own conclusions, but it is an interesting example of a clash between mainstream entertainment and an aspect of native culture that is deeply revered and protected.

And there is a financial aspect to this as well – with the loss of control over ‘story’ and tradition so too is there a potential monetary loss. JK Rowling avidly protects her intellectual property, and rightly so, creator’s rights matter, but the mechanisms to protect cultural traditions and story are less well defined. 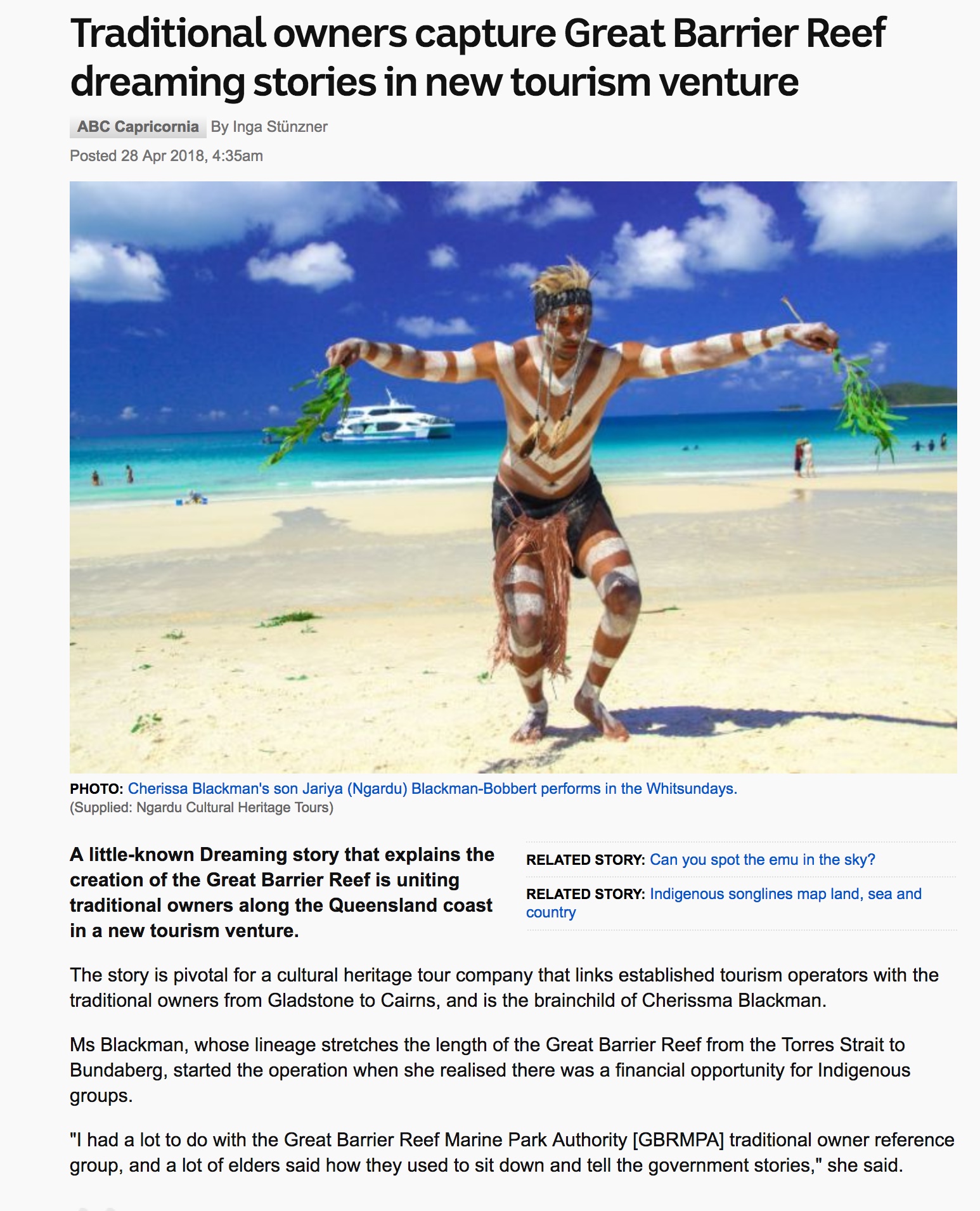 The community here have taken control over their ‘story’ and made it a business, and of course now located within a business framework there is considerable protection afforded by law. But the beauty of this approach is that not only can the community control the narrative but they are also protecting their heritage, recording what may have been an essentially oral tradition, thus ensuring their heirs can benefit not just financially but also culturally.

A recently published ‘indigenous guidebook’ from Hardie Grant Books ‘Welcome to Country’, written by anthropologist Marcia Langton a descendant of the Yiman of Queensland, takes a similiar approach. Framing the landscape within the context of  indigenous knowledge and story is a powerful way to both enhance tourist’s understanding and experience, and at the same time preserve and promote their valuable cultural legacy. 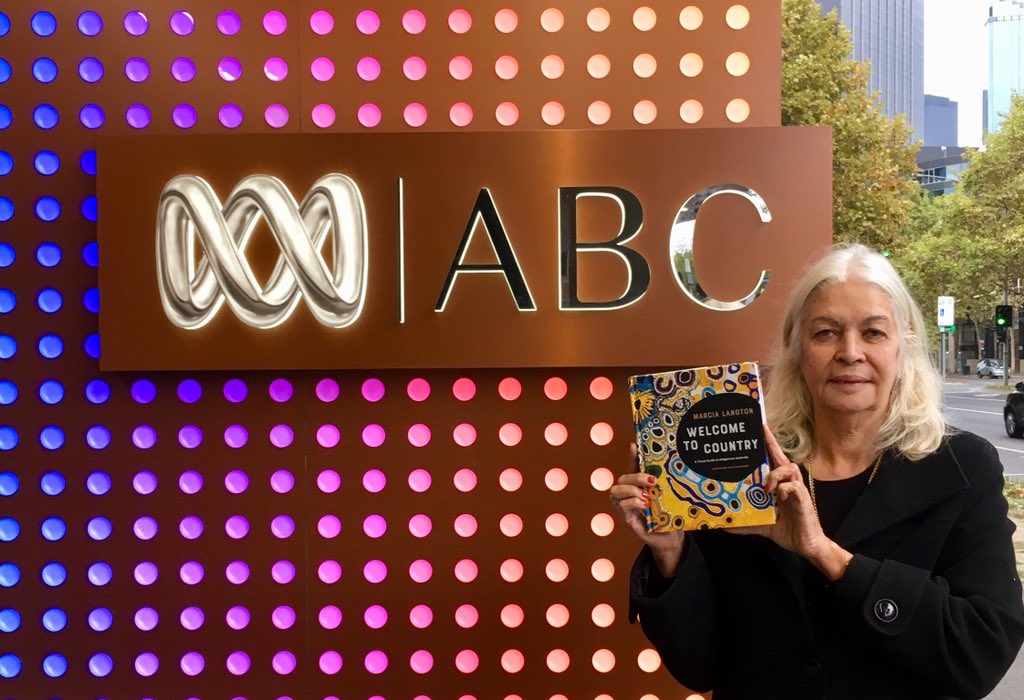 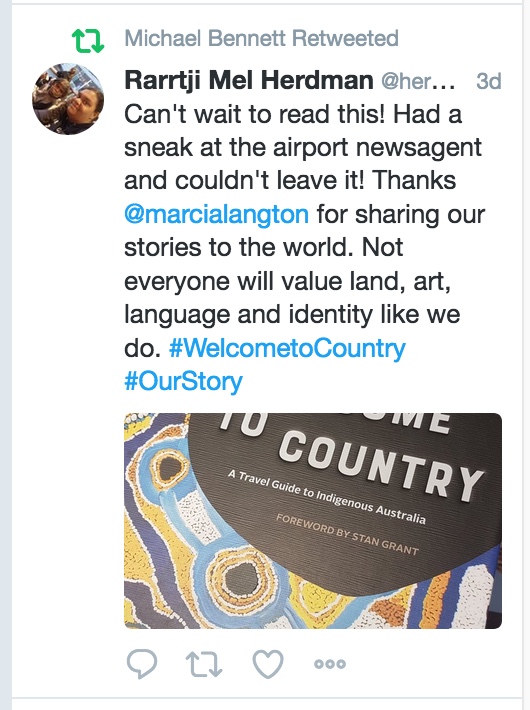 There’s a recurring problem in the photography/journalism industry where ‘outsiders’ are parachuted into locations and produce a body of work that, whilst eye-catching, fails to get under the skin of the situation. The reality is that locally based, culturally aware photographers,  sensitive to tradition and well connected to the community or place under scrutiny, can offer a more subtle and nuanced view. A fantastic example I saw recently is work from the Ecuadorean Amazon undertaken over several years by Misha Vallejo who was born and lives in Ecuador. And his familiarity with place shows in his wonderfully lyrical images. 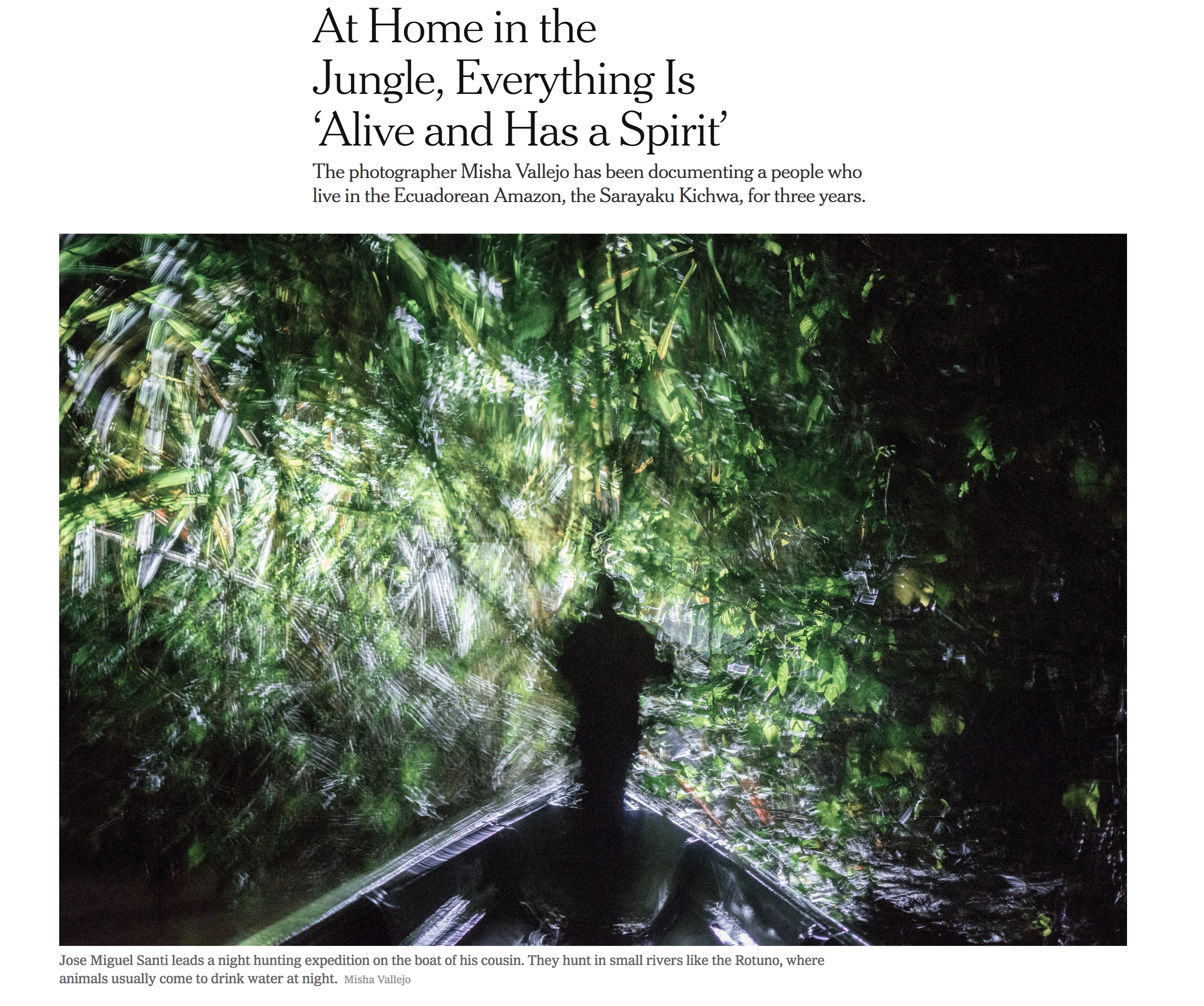 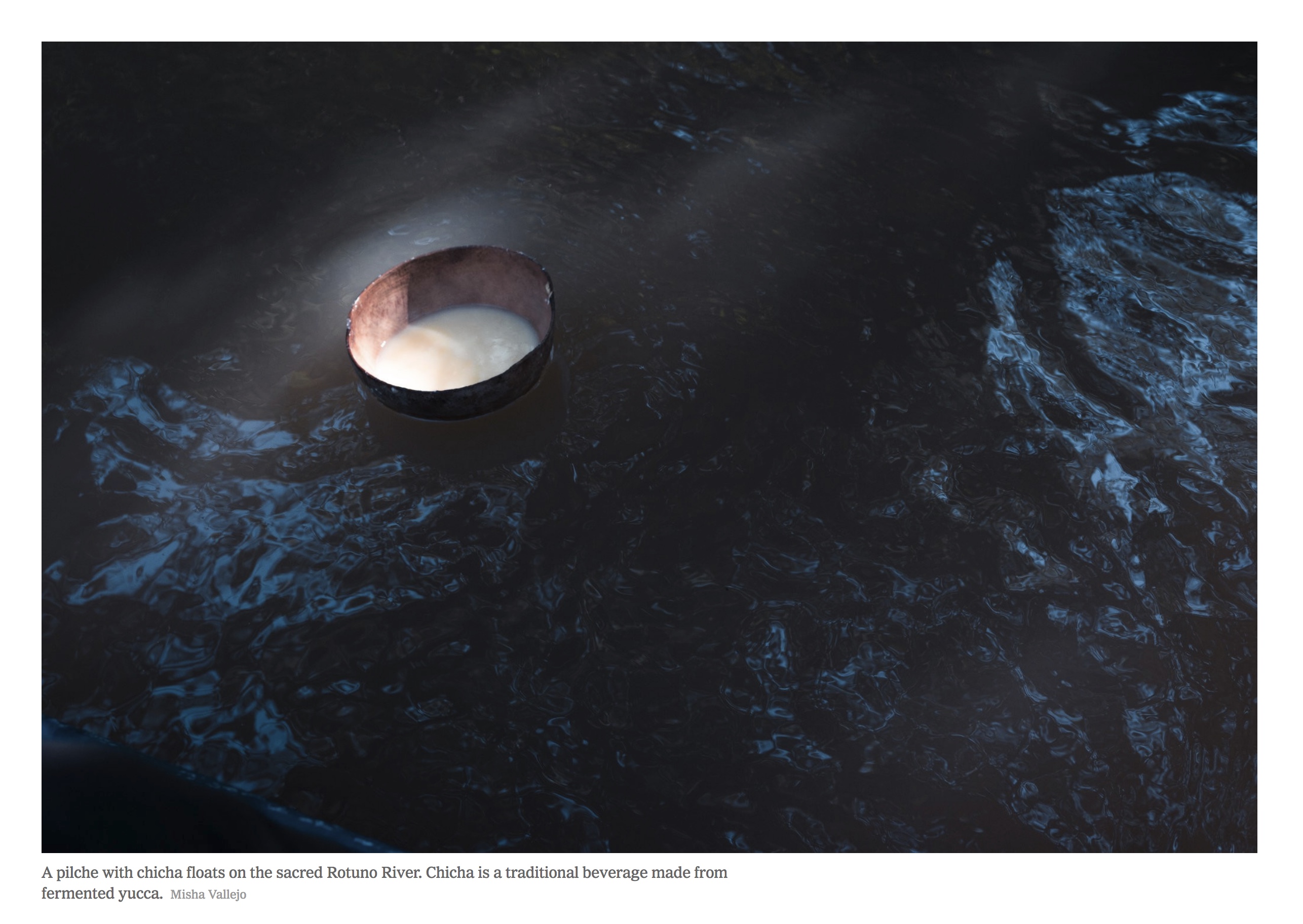 Editors need to draw on these local resources more often in my opinion. There’s a vast reservoir of untapped talent working away in their home districts, all over the globe. It’s not only good for we viewers, we get a more intimate perspective, but its also more sustainable not having to fly photographers half way around the world for a few weeks work, and it helps to support indigenous talent and preserve communities.

The Everyday Projects tackles this problem head on. Its mission statement:

The Everyday Projects uses photography to challenge stereotypes that distort our understanding of the world. We are creating new generations of storytellers and audiences that recognize the need for multiple perspectives in portraying the cultures that define us.

As a nonprofit, we combat systemic misrepresentation through our educational programming and by providing structure, support, exposure, and direction for the diverse and worldwide range of @Everyday photography groups — through professional development, community-building, and the promotion of new work. 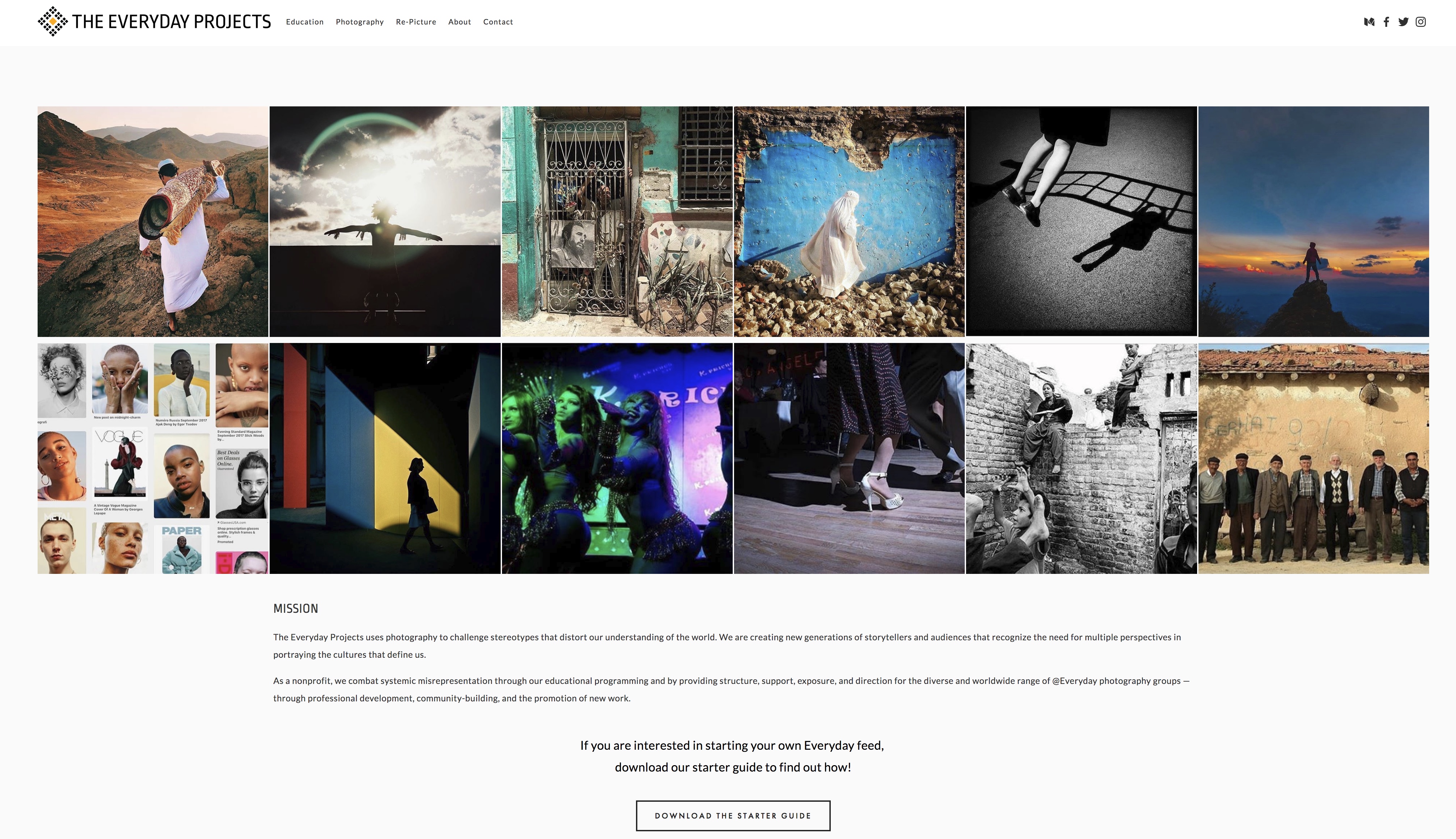 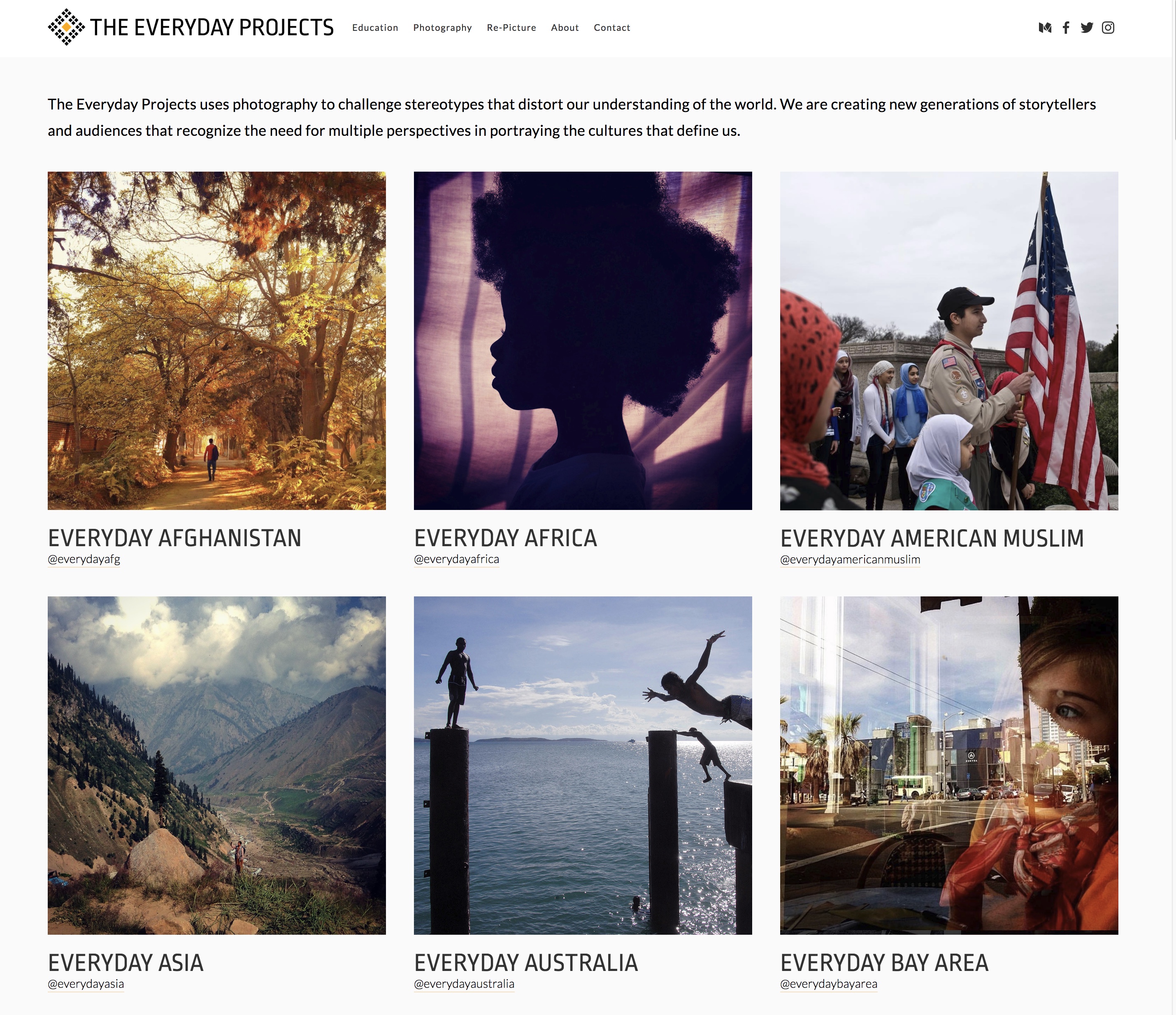 But these initiatives aside, it can be a hard job for individual photographers to raise their profile, so many are collaborating and creating cooperatives, pooling resources and talent and furthering their reach. A great example is the recently launched Natives Photograph 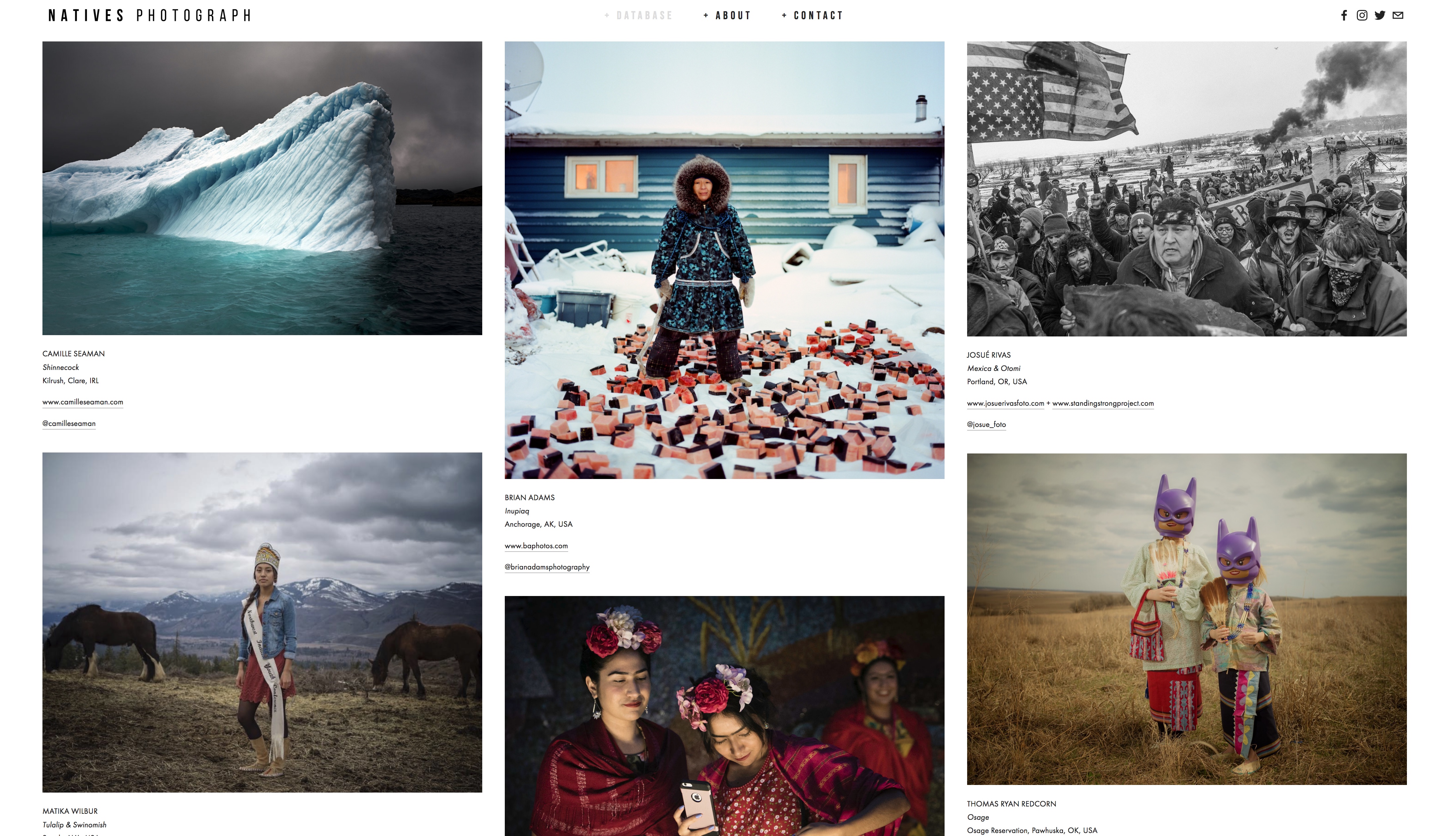 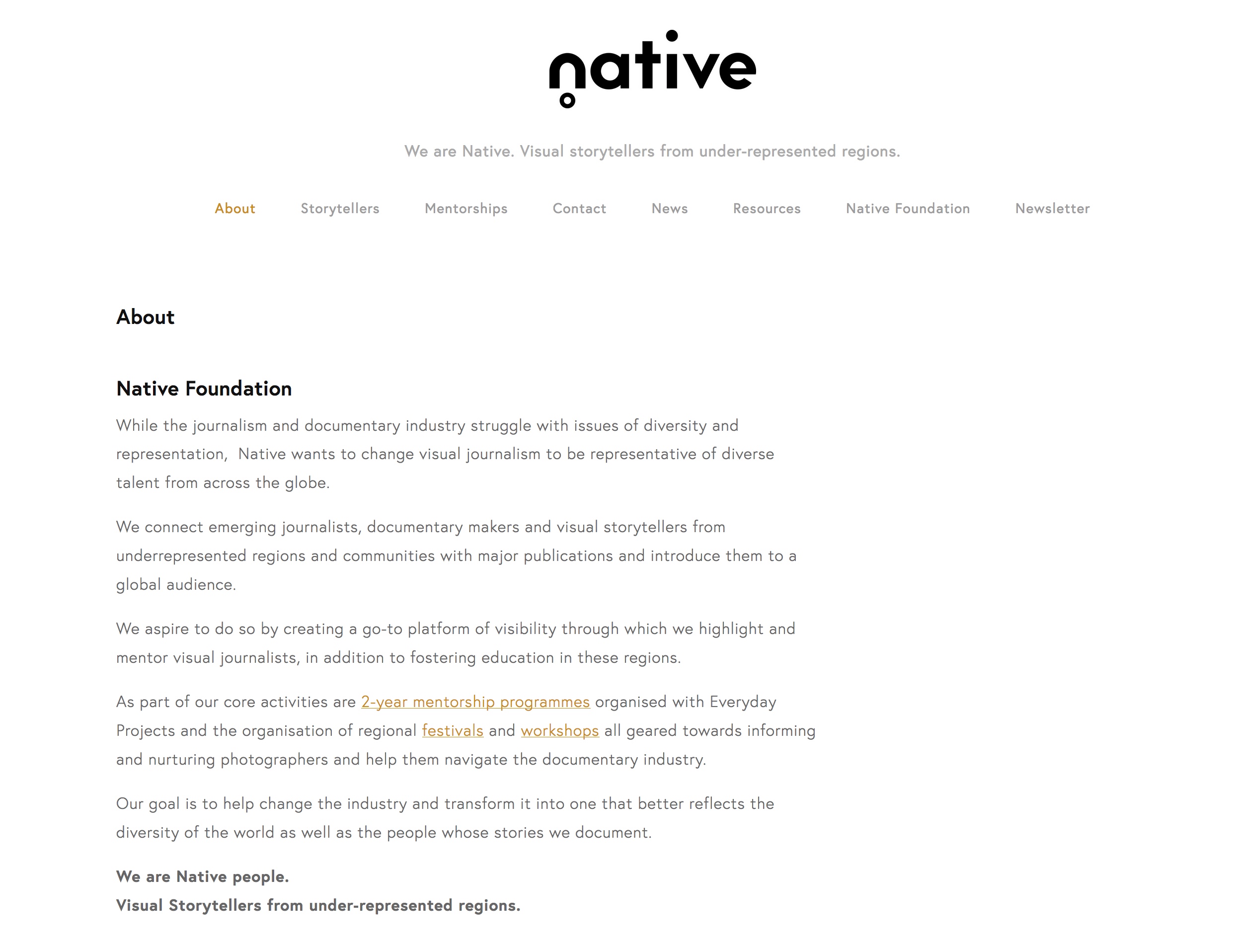 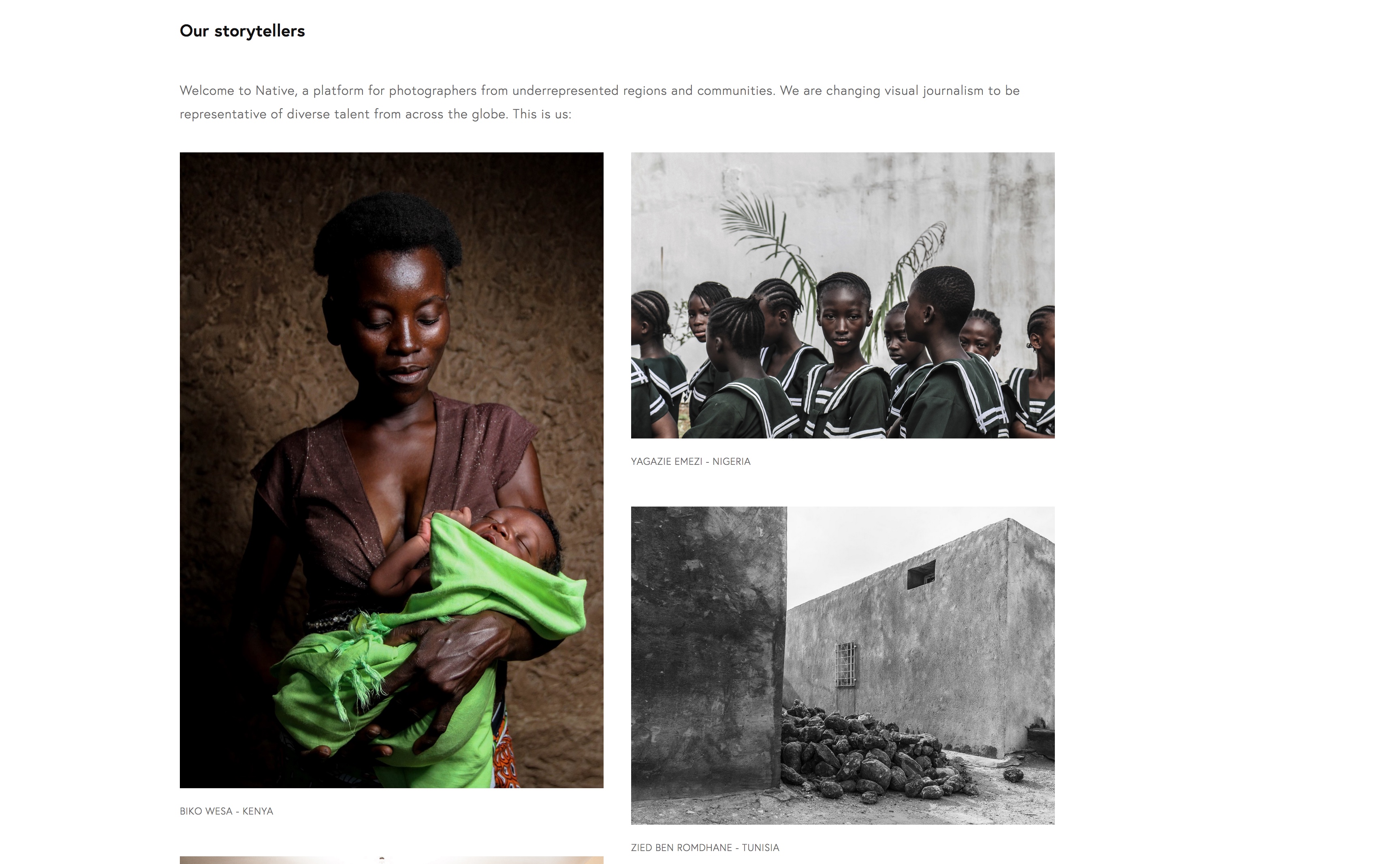 Founder Laura Beltrán Villamizar has a recent article in Huck Magazine: If photography is limitless, why doesn’t it represent everyone?

“The debate of who gets to tell these stories and how diverse they are is now just as important as the stories themselves. Why this matters is also closely linked to bigger movements, which have sparked the conversation within the photojournalism community as well: #metoo, women’s march, Standing Rock, and the need for more localised coverage of the news. But in a conservative, white male-dominated industry, change doesn’t happen by itself.

With this in mind, Native and Everyday Projects have come together with a mission: to ensure that the lenses through which we interpret our world are as diverse as the people and places we hope to document. We created a mentorship programme, geared towards nurturing visual journalists from regions that often lack representation in the documentary community and media industry.”

Which brings us full circle, to the fundamental issue of ownership, control of tradition and story. I was fascinated to see an initative that tackles this head on Local Contexts. 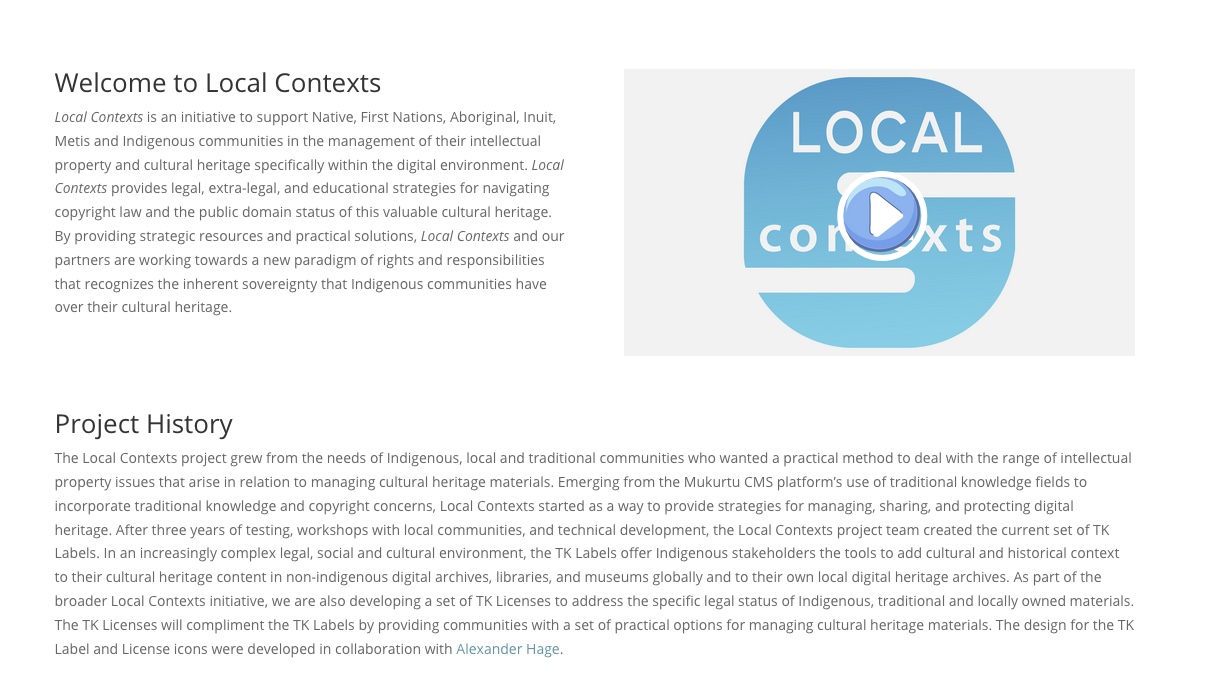 The digital environment is becoming an increasingly important space to share and reinforce traditional knowledge, but with this ease of sharing comes ease of misappropriation, TK Labels is a clever way to assert control and ensure that complex stories are properly told, that storytellers can be contacted, and simple but often overlooked details such as the names of those portrayed in images can be preserved. 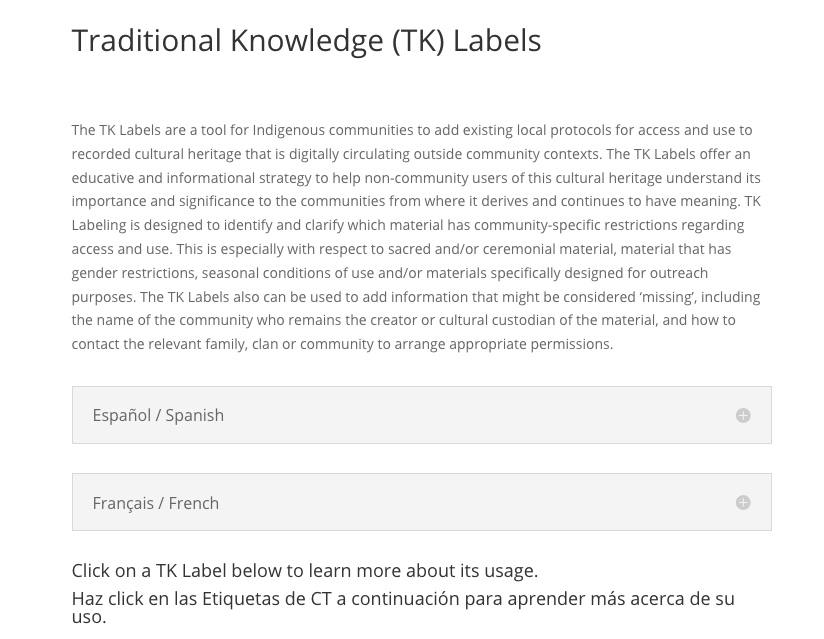 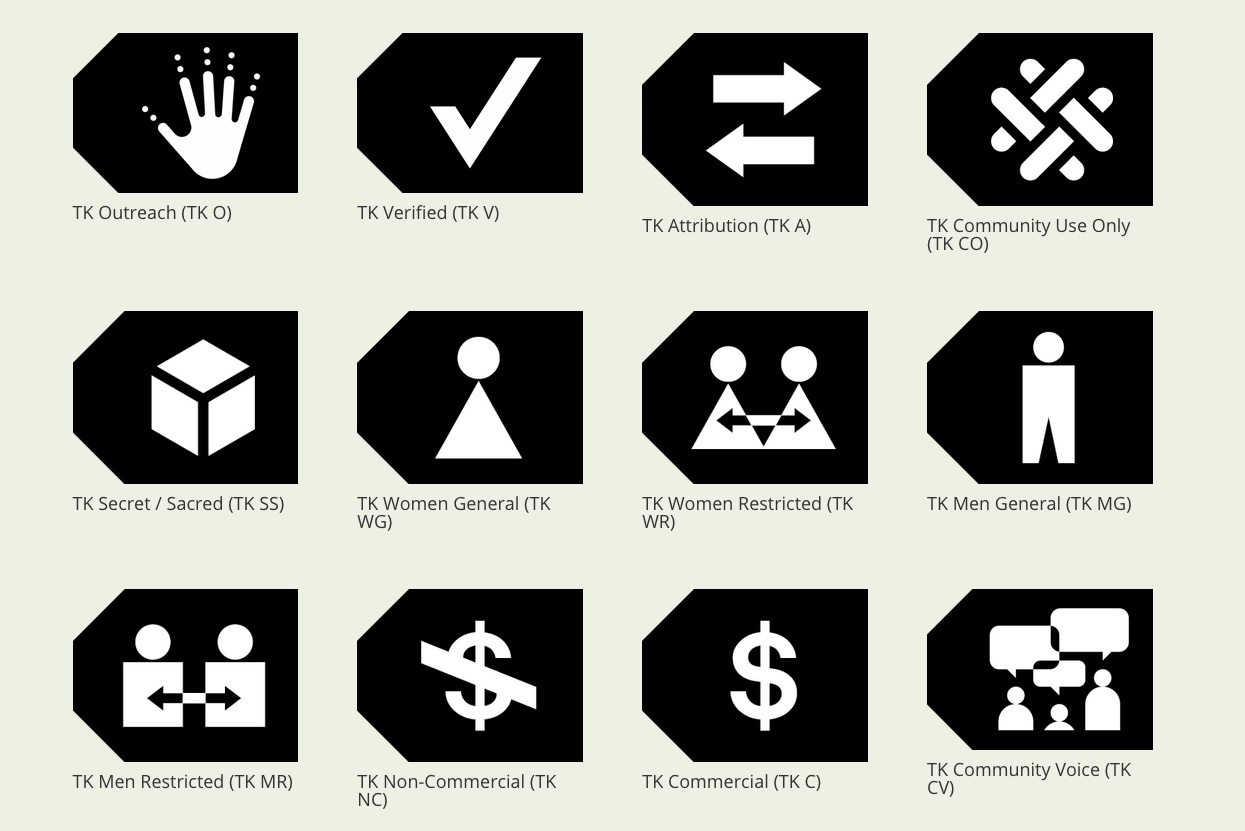 The most important aspect of all of this is that those who tell the story and control the narrative can shape the future, and accurately preserve their past. And at a time when indigenous cultures are under pressure all over the world, at the mercy of climate shift, cultural opression, and many other factors, initiatives such as those described above can have a significant and positive impact.

The stale ‘colonial gaze’ has had its day, its superfical and ‘superior’ (usually male) perspective is long overdue for retirement. No longer is it sufficient nor indeed appropriate to look at a community from the outside, peering in. Truth is we all benefit when the view we’re offered is from the inside, nuanced and subtle, but sometimes tough and challenging our preconceptions head-on.

I’ll finish with a quote I’ve used before, by Barry Lopez. It speaks to our need as humans to hear stories, but it underlines the role that knowledge (of place) plays in the understanding and subsequent telling of them, and I’d argue that the best people to tell these stories are the people who own them, live them and care about them:

“We keep each other alive with our stories. We need to share them, as much as we need to share food. We also require for our health the presence of good companions. One of the most extraordinary things about the land is that it knows this—and it compels language from some of us so that as a community we may converse about this or that place, and speak of the need.”