The blindness of photojournalism made crystal clear

EDITORS UPDATE: Please read Aranda’s response at the bottom of the post and my thoughts on it. It’s important to note that Aranda claims the family were happy with the use of the image, although in an interview he gave elsewhere he states they were not aware of the cover before it was licensed by him to the band for use on merchandise.

Yesterday, I saw Crystal Castles’ t-shirt / album sleeve campaign and I reckon it pretty much sums the rot up: 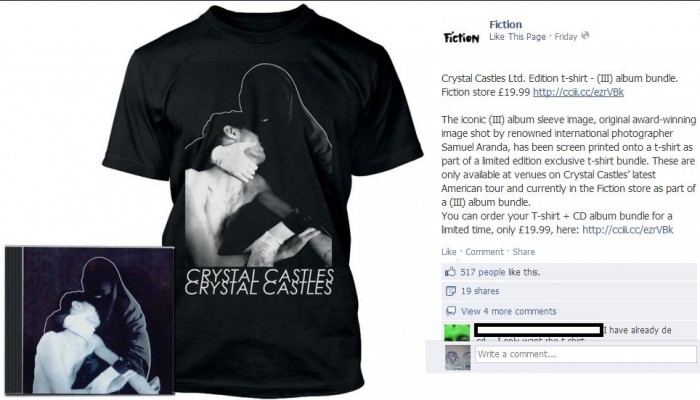 I’m flabbergasted by this. I apologise in advance if I am not wonderfully coherent.

Can you imagine if you saw a picture of yourself cradling your child whilst he/she is in pain on a band’s t-shirt; on an album sleeve?

I’m trying to imagine it. I think I would find it deeply alienating and humiliating. I think I would wonder if the whole world were not in fact against me. Which indeed, it would be, because the powers that be (i.e. the Western world and its advocates: politicians, war-makers, business people and photographers and editors, and, apparently, musicians) are happy to use my suffering in order to make money. They would be especially happy about using my body and image to make money because I was foreign, darker skinned, without much money, without political enfranchisement and non-Western. If I were the woman, I would also know that people were especially happy to trample on my identity in order to sell stuff because I have a womb, and – call it a double strike – I am wearing a niqab.

Ladies and Gentlemen, this is what happens when consumerism drives and is driven by a Western-centric, patriarchal, ‘white-man-saviour’, racist set of ideologies. This is what our type of consumerism does to people’s bodies, stories, grief, identities, humanity: turns them into a pile of disposable sh*t in the name of cool.

The original image, of a Yemeni mother embracing her son as he suffers with the burning pain of tear gas, won World Press Photo of the year 2011. But you know, f that, because now it’s on a cool electro-band’s t-shirt and album sleeve. Ooh and it’s a limited edition! 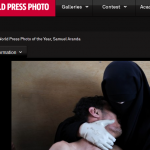 You know what’s also limited, compassion apparently. I do not know for sure why Aranda agreed for his image to be so totally detached from context, slashed free of human framing, and pasted onto a t-shirt for hyped up cool kids, but I’m guessing it’s something to do with our good old friend, Money.

If you believe in photojournalism, if you want documentary to work, as a photojournalist, photographer, artist, storyteller you are the defenders of the ethics and necessity of your practice. If you sell-out your images in this way, debasing the stories you claim to tell, trading in the bodies of people you claim to be an ally to, you deserve your industry to flop on its bloated, Cyclops-eyed face. If you cannot see beyond the money, you have no business engaging people in image making in their private moments of suffering.

What the use of this image on a ‘cool’ t-shirt has done is turn these people into objects to be consumed by people who are far more privileged than they. The objectification and consumption of a person’s story, which essentially figures a dehumanisation of that person, has been used to support and reassert the identity of a privileged group of people. The consumed people are fighting for their identity by protesting against an oppressive regime. The privileged group of people pose their ‘identity’ by purchasing a band t-shirt.

The question has been raised: How is this any different from what the World Press Photo does with these images? My take on that: not different enough. However, one crucial difference is context. The WPP represents this image with context which locates the suffering of these people in a meaningful political and personal story. This raises awareness. This asks for witness, and witness asks for people to protest, to petition and to see the ‘other’ as an equal human. This is especially important when we consider the demonisation of Islam in the West and the very real way this leads to savage attacks on innocent people in Islamic countries, attacks which we do not protest, attacks which we quietly consent to in order to ‘protect’ ourselves. This t-shirt bears no witness, it is blind and axe wielding, severing image from story and denying political response or narrative.

But as I say: the difference is not enough. Who profits through the WPP? Who wins? How are the spoils of war shared? How are our professional and personal identities shored up again and again by capturing and viewing and trading in the suffering of others, whilst tangible, meaningful outcomes for those  depicted are left un-grasped?

What is this image now then? Nothing more than a colonial white man’s trophy – a grizzly head – held up victoriously upon returning to the empire’s soil, and kept, thereafter in a glass case. Looking at the case’s polished surface we see reflected back to us our own whole and safe Western selves; our own stories and identities validated by our own consumption. The shrivelled head remains in shadow, its history vague and distant, its suffering unknown. Our faces across the glass are all the more clearer for the dark background it supplies us. Our selves are all the more whole for the disintegration and digestion of those other, shadowy selves whose pain is nothing more than a motif.

Rock on photojournalists, rock on.

First of all, I don´t understand that you publish an article about me, without contacting me in advance to ask for my answer. Is not really ethical in journalism, in case that you are a journalist. The language that you used is pure sensationalism. The answer to this “polemic” that you are trying to create is easy, I still in contact with the woman and her son, and they were agree on this. Also it was a personal interest from the music group to put the focus on this persons that during the last two years are fighting for their rights. So, I don´t see the problem anywhere, everybody was agree, and this photo published in the front of the album will arrive to many youth that will know about Yemen and the suffering of the civilians in this country.

Hi Samuel, great image deservedly recognised. Thanks for your response.

In your response you state ‘ I still in contact with the woman and her son, and they were agree on this.’  In an interview published last November you were asked about how the family feel and you state ‘I think they’ll be alright with it, they’re really easy-going and open-minded people.’ So at the point where the artwork for the album had been decided and printed and according to the article the merchandise also designed the people in the photo had not been specifically told.  Sure they were very happy and proud of the photo though but might not have expected it to turn up in this context?

‘This photo published in the front of the album will arrive to many youth that will know about Yemen and the suffering of the civilians in this country.’

I think if you get beyond the ‘sensationalism’ of the post you’ll see that one of the problems that Madeleine has is the de-contextualisation of the image. That the ‘youth’ (and slightly less youth like me who loves the album) won’t know anything about the suffering in Yemen. How could they from the image?

Please note this is a comment piece on a blog about the sale of a photo to be used on an album and t-shirt that has been in the public domain since last September. I don’t agree with everything in the post but I do upheld the right for people to express an opinion on the blog about work in the public domain, even if those opinions upset some.